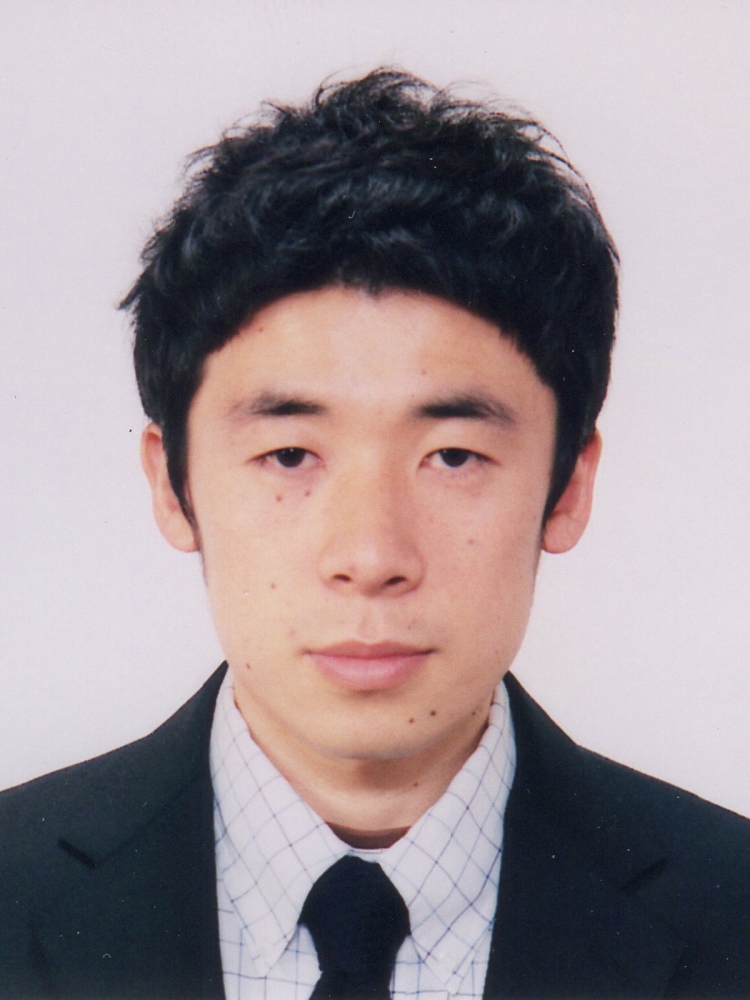 The island of Cyprus is divided between Turkish Northern Cyprus and Greek Southern Cyprus, and the line dividing them remains under the control of the United Nations to the present day. Since ancient times Cyprus has been situated in complex geopolitical circumstances, and any contemporary talk of Cyprus must begin by mentioning that it continues to be so.

arTwins in Open Spaces, the program that I took part in, consisted of ten artists selected from different countries working in pairs to produce work for outdoor display. I was paired with the Egyptian artist Mina Nasr to produce work. This was of course an ambitious initiative seeking to reflect the political and social situation of Cyprus divided north and south and to embody the theme of Pafos2017, “Linking Continents, Bridging Cultures”.

While on the one hand I felt it an honor to take part in this wonderful program of social significance, at first I also sensed difficulties posed by the political correctness that lay in its background and in the method of joint production. First, of course, it is not always the case that good work emerges from a wonderful program of social significance grounded in political correctness. Our regard for a program and for artwork are two different things. Next, it was easy to imagine how two proud artists would find collaboration difficult. My only thought was not to produce tepid work that accomplished something banal out of a desire to avoid a clash of self-assertion.

Mindful that the autonomy of artwork makes no apology ever, I set to it.

It was in August 2016 that I learned my partner was to be Mina. Before anything else, I wanted to learn about him, and the project started with getting to know each other via Skype and email. Egypt, where Mina lives, is located across from Cyprus with the Mediterranean between them. He does what people call painting. Showing the influence of his study also of sculpture, his work is characterized by his depiction of human forms in black and white emphasizing light and shadow. The people he draws express a variety of emotions, but many of them are sad. The reason why is that he is confronted with people distressed in an Egyptian society where confusion has lasted since the Arab Spring. He takes the pressing issues of Egyptian society as his own and makes them the subject of his work. 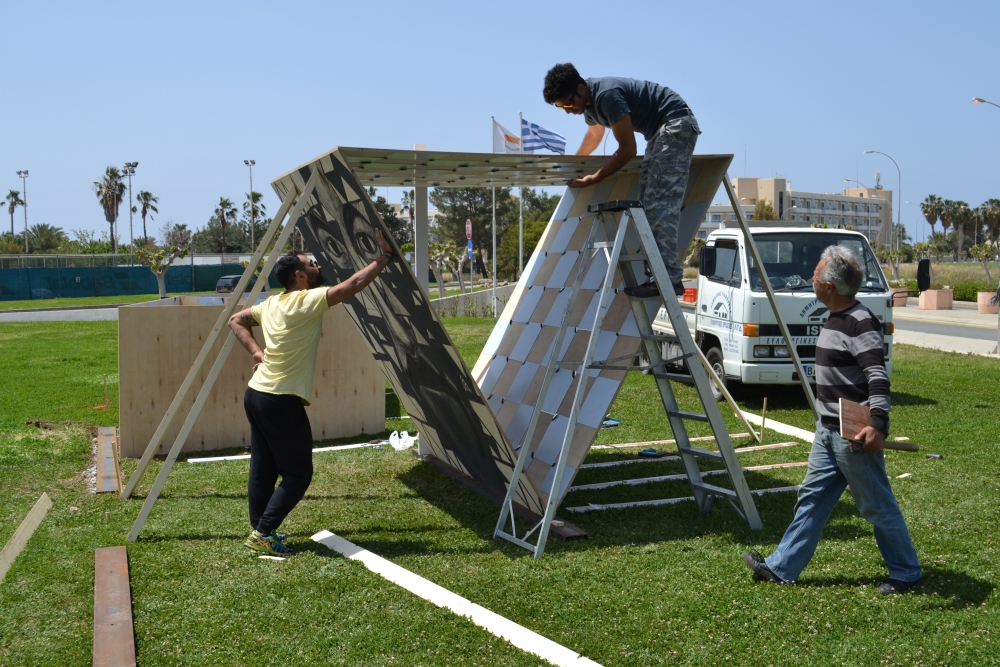 Production of the work (Photo by Kazuhiro Yajima)

The concept of our work was to reflect the Pafos2017 theme “Linking Continents, Bridging Cultures”. I thought that in doing so it would be critical of the intolerant societies recently abroad. If we were to build a large space on a small budget, it seemed that the only material available to us would be strong, low-cost plywood. The thickest water-resistant plywood we would be able to get hold of in Cyprus was 1220mm x 2440mm x t18mm. To fill out our low budget we applied for grants. Since we would not know until execution was upon us whether any grants were forthcoming, I was plagued by concerns about such matters as budget uncertainties until the last moment.

I lit on the idea of building a structure standing on the square sides of triangular prisms. Though each triangular prism would be unable to stand on its own, the structure would be a stable one if they were joined together. Each of the triangular prisms would express diversity, and Mina would draw on their surfaces the faces of people of various races that he has met. The structure would stand by means of their support of each other even as they accepted their differences. This would also connect in a basic way with Mina’s issue awareness. Since we could use more or fewer triangular prisms depending on our eventual budget, it also allowed for the uncertainties that would plague our funding until the last minute. 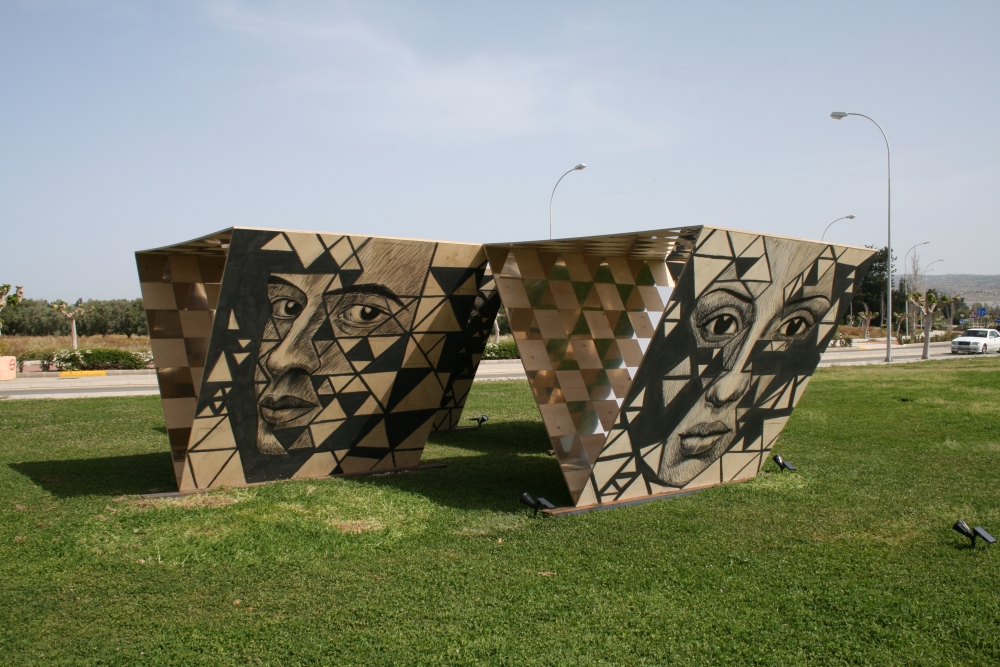 Mina is an artist who is already active internationally. Since he was going to be in Korea for an artist-in-residence program, we decided to meet in Seoul in October 2016 to talk things over. Cradling my model, I headed for Seoul. It was a relief that he took a liking to my proposal. Be that as it may, it was a curiously international experience for a Japanese architect and an Egyptian artist to be meeting in Korea to discuss in English their project in Cyprus.

The day before I left Japan for Pafos on 7 April 2017, the American navy launched some 50 cruise missiles at Syria from the Mediterranean off the coast of Cyprus. In Cyprus I met many people who had traveled in Syria. It made an impression on me how they uniformly described as unbelievable what had become of such a beautiful country. Whereas time passed almost too tranquilly in the tourist resorts of Cyprus, one could not help but be aware of the tragic situation across the sea.

In Pafos we had a production period of only 15 days. It was thanks to our carpenters Giannis Giannakou and his father who executed our work that this short time was sufficient to complete the work to satisfaction.

Mina and I went to work everyday at their home and workshop. What we looked forward to everyday was the delicious lunch that his mother prepared for us. We all talked of many different things as we gathered round the dining table. It appears that Cyprus welcomes thousands of people to wedding ceremonies, and through Giannis and his family we caught a glimpse of the Cypriot culture of hospitality.

As soon as we had installed the work, local people gathered as though from out of nowhere. It was in particular the sight of the children chasing about our work with glee that made me realize it had been accepted. The work is for permanent exhibit and is planned to remain on show beyond 2017 as city property.

I was able to make the acquaintance of many outstanding artists also taking part in the program. They were from such countries as Cyprus, Germany, Bulgaria, Montenegro, Egypt, Italy, China, Poland and Hungary. And it was with the support of many different people that we were able to complete this work. I would like to express my gratitude for this wonderful opportunity to the Pafos2017 secretariat, to the EU-Japan Fest Japan Committee, the Nomura Foundation and the Asahi Shimbun Foundation for the grants they provided, to the structural engineer Akira Suzuki for his advice, and to Giannis and my partner Mina who brooked no compromise in production. I hope to meet again somewhere with the many people that I met through this project. 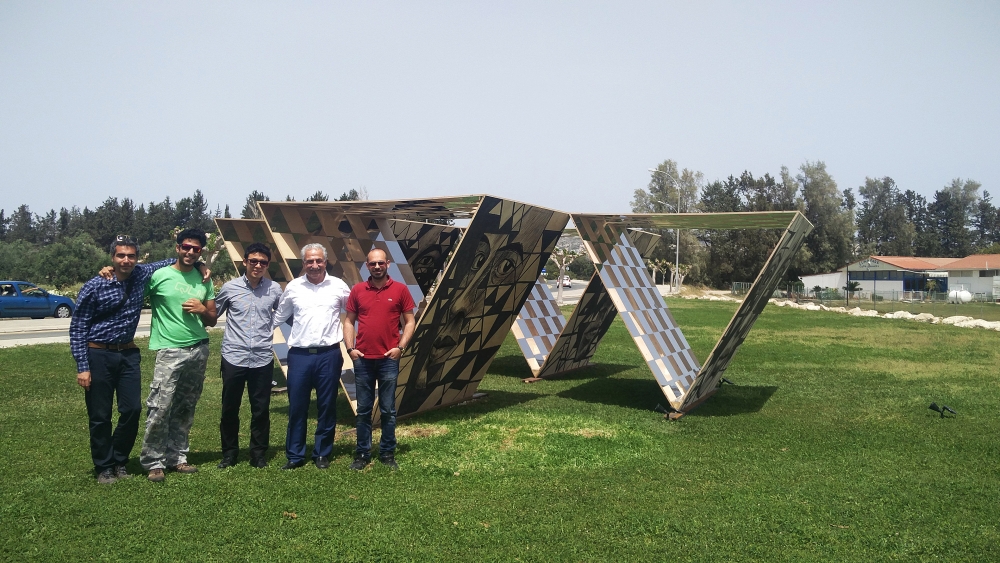 With artists from other countries (Photo by Kazuhiro Yajima)