HOME > Column > A Walk Through the Line 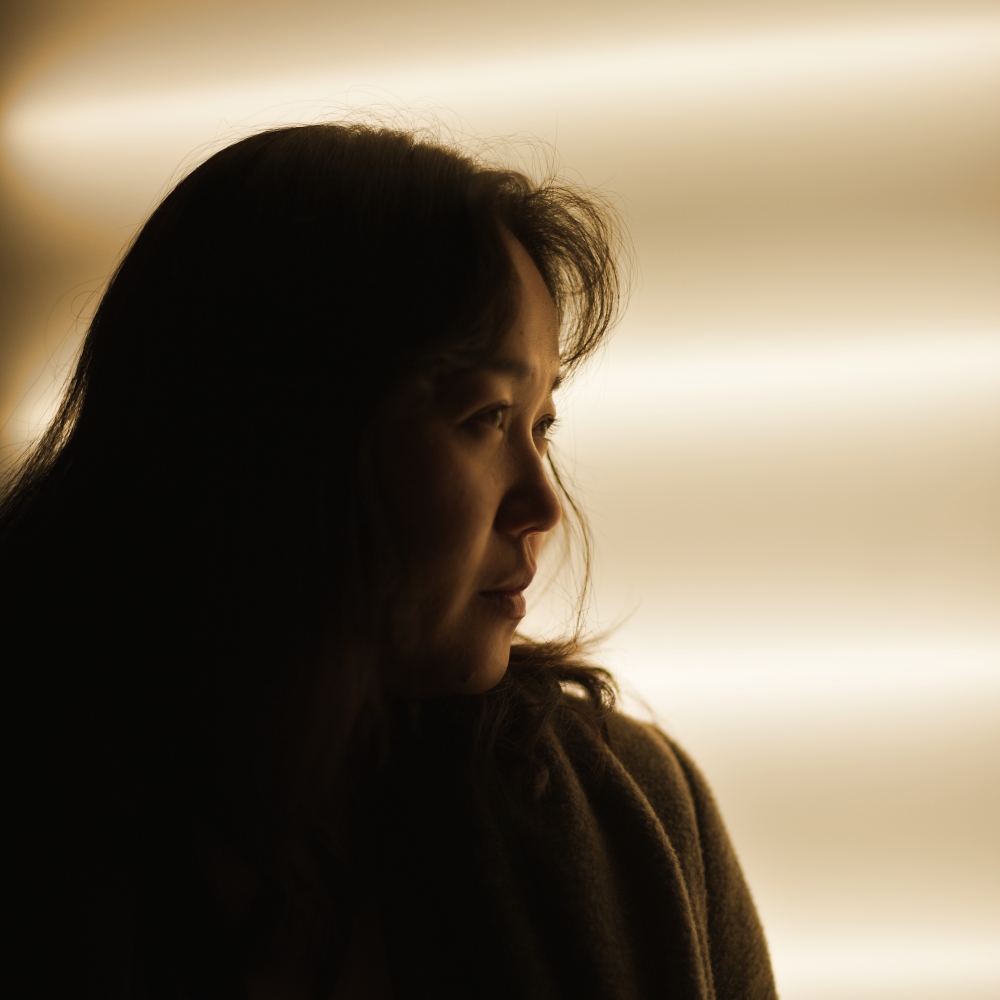 Selected as the 2017 European Capital of Culture, the port city of Pafos is situated on the southwest coast of the Republic of Cyprus. Executing work in a cave in that city was for me a challenge. I had almost no experience showing work in a historic space formed from Nature entirely unlike a white cube, and I was anxious about how I would be able to create the work.

A work employing yarn requires, in the process of knitting, a base of some sort to secure the yarn. Since I was unable to fix wire, which I ordinarily use as the base for my work, directly to the wall of the cave because the caves are cultural treasures symbolic of the town, I talked it over with local engineers and architects and so had built a steel frame patterned after the wall surface. The frame was a grid 20 centimeters square and would serve as the base for executing my work. 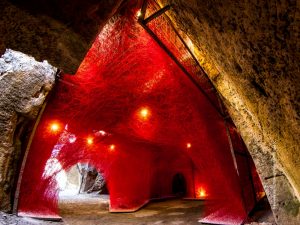 Production of the work (Photo by Pafos2017 ©LARCO)

Titled “A Walk Through the Line” and consisting of red yarn woven every which way, this work symbolizes the timelines where we human beings intersect, or the history and memory of an individual. Each one of us creates within space and time an intimate reality formed from our own timelines intersecting with past, present and future. It seems to me that all we have in our contemporary world is just the opposite of the connections that we actually seek, one in which connections are sundered and relationships severed, leading to conflict.

The reason why I employ yarn in my work is that I think the relationships yarn forms as it is unraveled, cut or tied are capable of expressing the full range of relationships that we human beings form with each other. And the individual lines that build up as yarn is woven are able to generate an infinite space as though spreading through the cosmos. A yarn installation is only completed when one can no longer track it visually. It then forms a deep space that is difficult to call layered. An individual’s memory forms a complex network much like the activity of cranial nerves. I think that in my work too, truth becomes visible within the work once one can no longer track the yarn by eye. I created this work with the notion that a viewer would be able to focus on individual lines within the space and trace them where they lead.

I use red because it is the color of blood and wanted thereby to represent the connections between human beings. 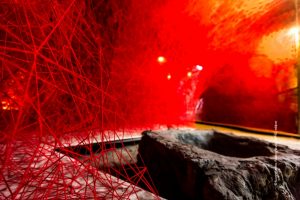 The Republic of Cyprus is on a small island, unique in being shared between two states. With what feelings do the people of this land, divided north from south, look at each other on the other side? I recalled a work called “Wall” that I showed in 2011. This is a video piece showing tubes in which a red liquid flows winding about and crossing over my body. These tubes wound about the body appear to be blood vessels. Blood functions much like a wall does. This liquid contains all the information about ourselves. I wanted to show with this work how the nationality, religion and culture that are personal background inherited by us and flowing in our blood are tied deeply to us. One aspect of a wall is identity and nationality, another is freedom. Since first leaving Japan to live in the country of Germany, I myself have searched for my own identity any number of times. I feel that in creating work in this current Republic of Cyprus, tangled up in history in complicated ways, I once again had a strong appreciation of my own identity in a small way.

While installing the work, I sensed among the people of Pafos strong connections they feel with the town. I sensed too the enthusiasm and love of the curators for a cultural project conducted for the city. Even when busy they showed me around historical places in the town where they were born and raised. It was encouraged by their strong will during this time that I was able to complete the work. 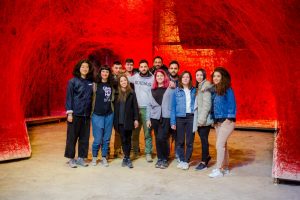 With artists from other countries (Photo by Pafos2017 ©LARCO)

I am never alone in completing any of my pieces. The works themselves take form while making connections with different people. That’s so even for just a steel frame for knitting yarn. It cannot have been simple to produce a steel frame fitting the irregular shape of a cave. I shared my image of the work with the staff in Pafos, and production then began with our discussion of how to make it happen. Although at times I shut myself up in a studio and work silently, there are always lots of people involved around the installations that are my primary focus. For “A Walk Through the Line” too, the engineers and architects who became involved locally, and the entire staff of Pafos2017 as well, poured their energy unsparingly into the achievement of my work. It is only with the connections of this energy that the work first takes shape. I know in my heart that without their energy it could never have happened.