HOME > Column > A journey full of love and broadening

[Vol.91] A journey full of love and broadening 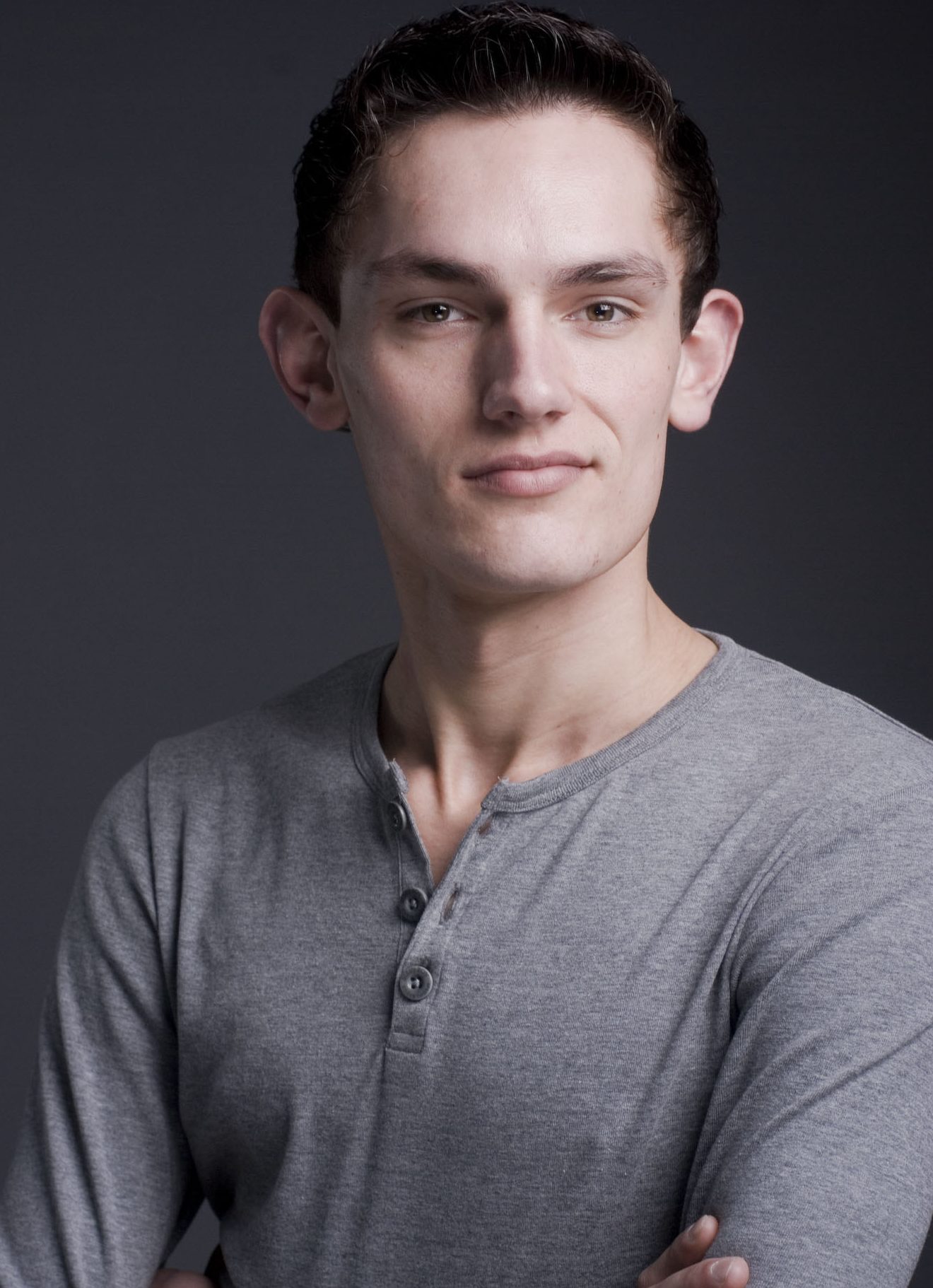 The European Capital of Culture Leeuwarden 2018 asked me to represent Iida Puppet Festa in Japan. “What an incredible opportunity”, I thought. I would certainly not let this pass me by. I would be given the chance to build upon my experience in puppet theatre, but I would also be allowed to increase my view of the world and get to know myself better. I was certainly able to deepen and broaden myself and therefore I would like to thank Leeuwarden 2018, EU-Japan Fest Committee, PUK Theatro, Tryater, Sociaal Fonds Podiumkunsten and all the people I have met.

My journey began in Tokyo and I thought it was rather exciting to travel to a strange country all on my own.  The moment I arrived in Tokyo it felt like I was wrapped up in a warm blanket. This was not only due to the sun, which sent all her warm rays of sunshine down to me, but also due to the friendly and open people of Japan. I only had to glance at a road sign and they would walk me to my destination. Or they would simply make some small talk with a smile on their face. They were incredibly kind. 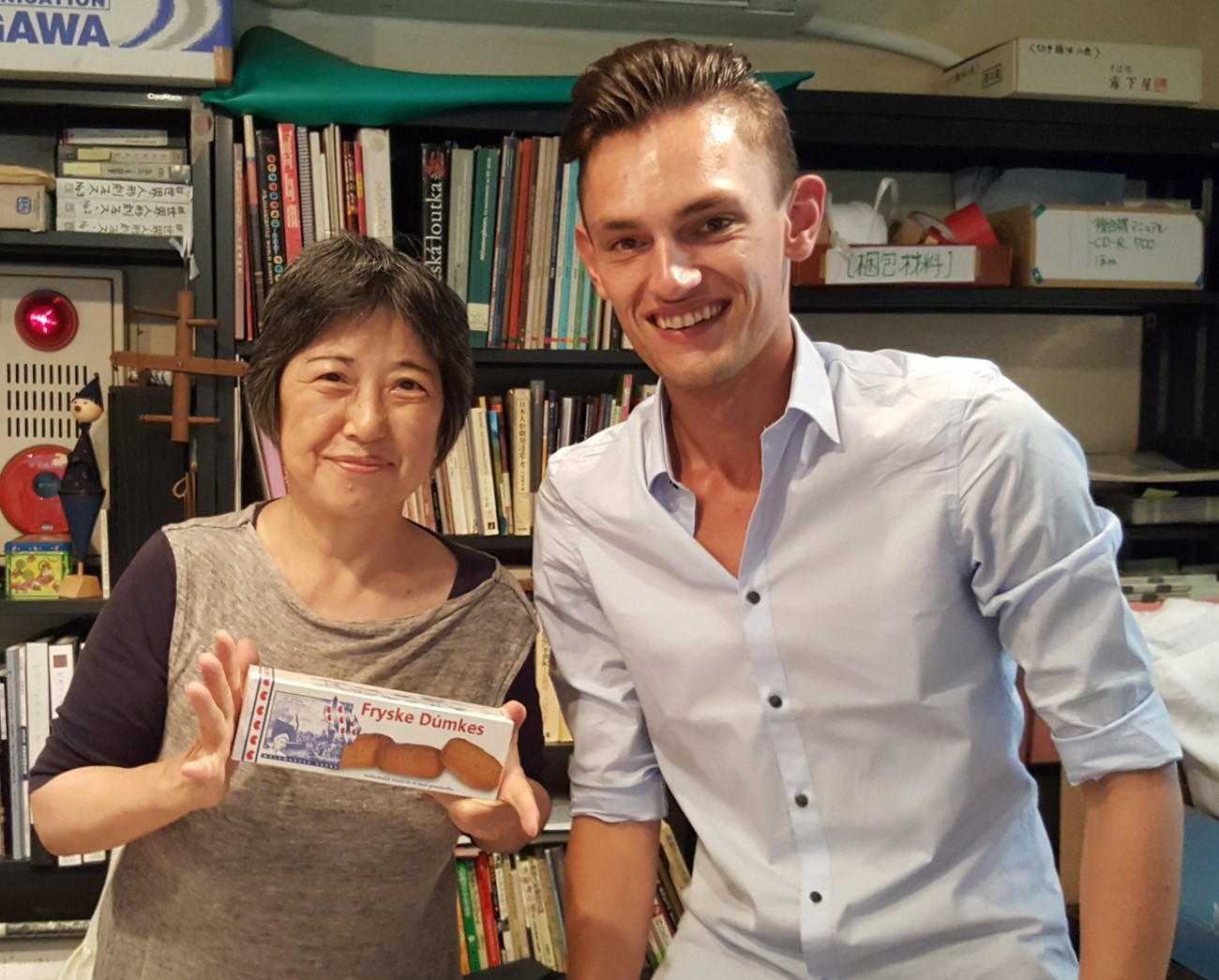 I stayed in Tokyo for two days where a talk with Mr. Kogi of EU-Japan Fest and a talk with Ms. Onagi, manager of PUK Theatro, were scheduled. Mr. Kogi and I discussed  many political matters over a delicious dinner. We talked about the connection between Japan and other countries, and the connection between Japan and the Netherlands. We also discussed Brexit, what is going on in Japan and what cultural capitals mean to Europe.
In any case the cultural capitals should not be a political matter or strive to become one. We believe art should prevail and bring us together. Art should connect, which is how cultural capitals could work together with Turkey, for example, despite the differences in politicals ways of thinking and behavior. Art connects.

On Monday 1 August I had a conversation at PUK Theatro, which is a large company with its main office in the centre of Shinjuku. I met Ms. Onagi (manager of PUK Theatro and member of UNIMA) and Ms. Taketomi (an employee of EU-Japan Fest Committee) there in a beautiful building. Ms. Onagi and Ms. Taketomi would come to Iida later that week to visit the festival. Ms. Onagi provided us with many tips on which performances to see. She also gave me lots of information about puppet theatre in Japans and about festivals in San Sebastian (Spain) and Dordrecht (the Netherlands). With a backpack full of information I left for Iida Puppet Festa to immerse myself in puppet theatre.

The first performance I saw was ‘Volatiles’ by the French group Compagnie Yokai led by Violaine Fimbel. In short, the performance was about a woman full of sorrow who transformed into a bird, which symbolized freedom. The 45-minute performance brought me in a melancholy trance-like state. The slow, but powerful images allowed me to experience the transformation from human to bird, which was incredibly intense. Fimbel plays with imagery, light and illusions, which was quite interesting. This was a good start of the festival! 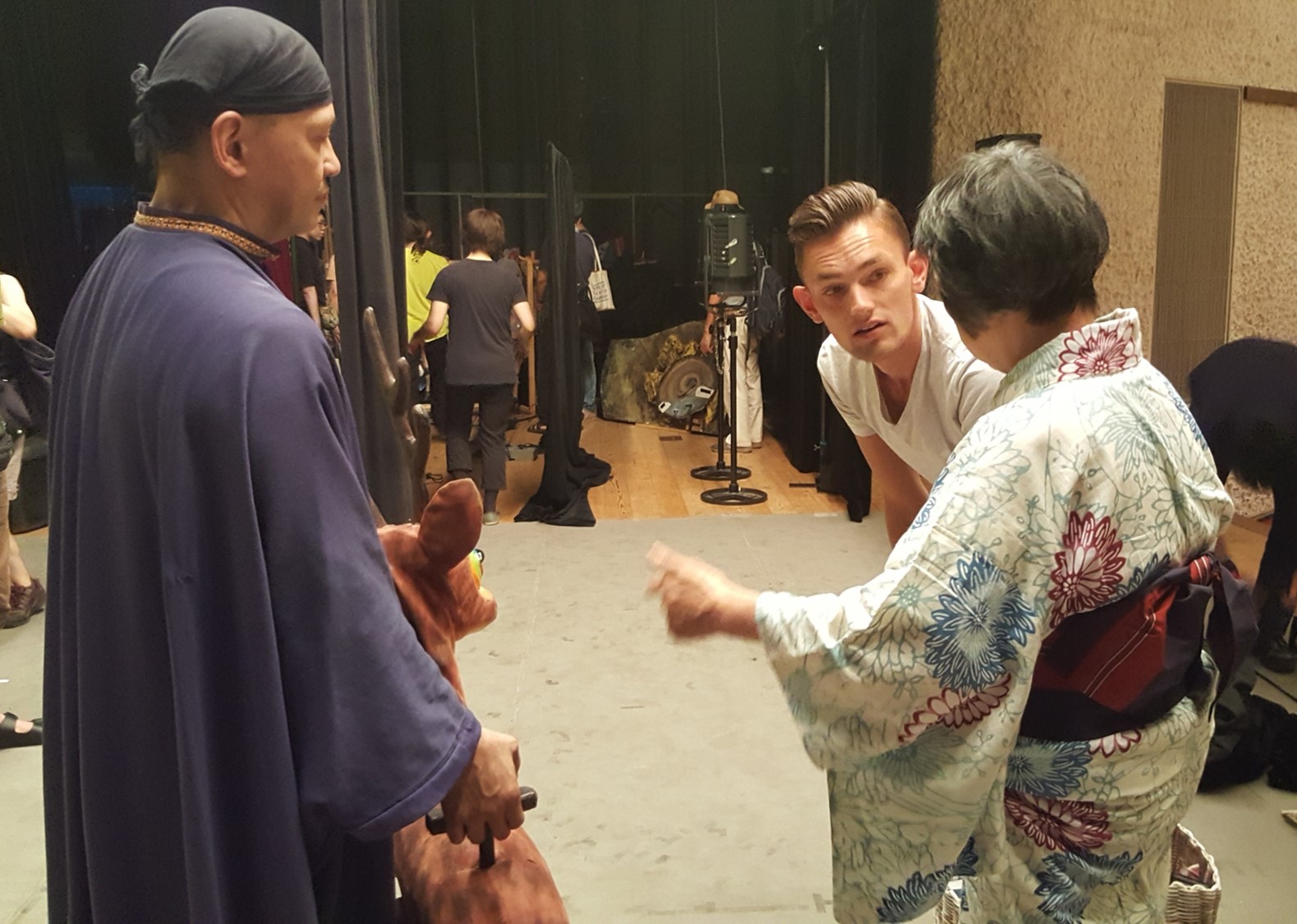 The next performance I got to admire was by PUK Theatro. Unfortunately, I couldn’t follow the story entirely as I haven’t mastered the Japanese language. Fortunately, this allowed me to focus completely on the puppeteering and the puppets. I enjoyed the puppets immensely: four deer. This made my puppetmaker’s heart smile. The style of these particular puppets was positively magnificent. Ms. Onagi allowed me to have a look back-stage and of course I immediately checked out the deer.
I gave them the full inspection so I could find out what kind of materials and what kind of techniques they used to make these puppets come to life.
After the back-stage tour Ms. Taketomi and I were invited to the Welcome Party. I would hereby like to thank Ms. Taketomi again for all her help and especially for all the lovely conversations we had about art, Japanese culture and about ourselves. It was such a pleasure to have met her!

At the Welcome Party all makers and puppeteers came together to eat and toast on a great festival. It was lovely to have everyone come together and talk about the performances at the festival and puppet theatre as a whole.
At the party I met Marek Waskiel, an artistic director of a large theatre in Poznán, Poland. He made a show collaborating with Japanese actors and Polish actors from his own theatre. The performance involved a concept of everything existing out of triangles. The decor consisted of triangles and triangles were used to create objects, such as birds, water animals, trees, etc. The performance was aimed at children, but it tickled my fantasy as well. In an hour all the four seasons passed and my imagination was sparked. What a great form and experiment it is when you can fire up the imagination of your audience by just using triangles. 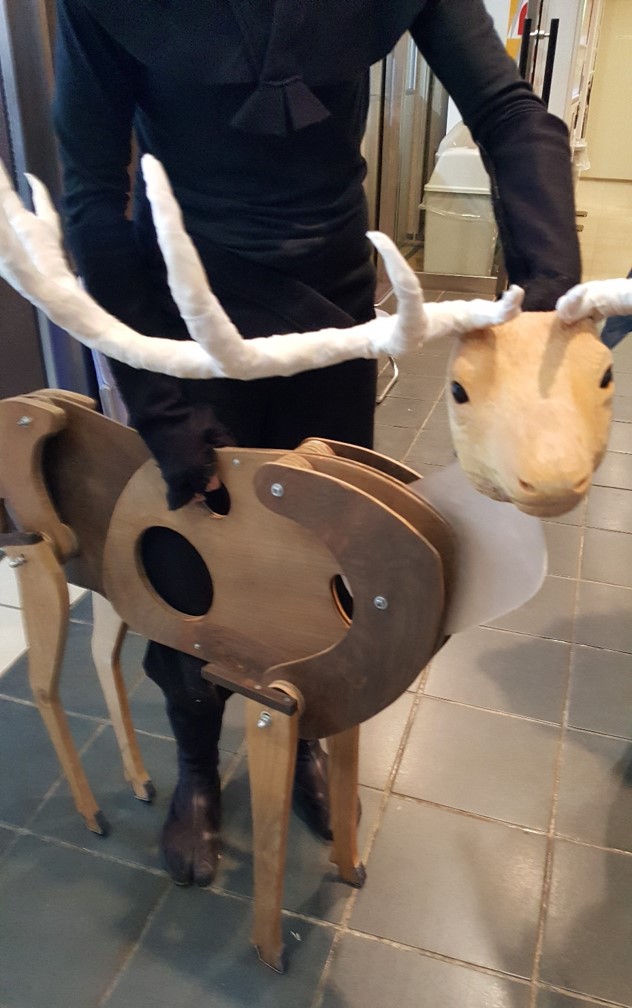 I have seen many performances, but I would like quickly like to highlight Shank’s Mare, a performance created by Tom Lee and Japanese Master Puppeteer Koryu Nishikawa V. The show told the story of two wandering travelers whose paths intersect in time and space. Using traditional Kuruma Ningyo puppetry, video projection and live music, the piece explores themes of life and death and how tradition is passed on. Japanese and western theatre styles merged beautifully into this performance and I would really like to see it in Leeuwarden. This show also had a deer, made out of wood this time. It had a completely different shape from the deer I saw in the performance by PUK Theatro. Its shape made me realize that one can approach the same idea in an entirely different manner and that this is also a beautiful technique to creating puppets. 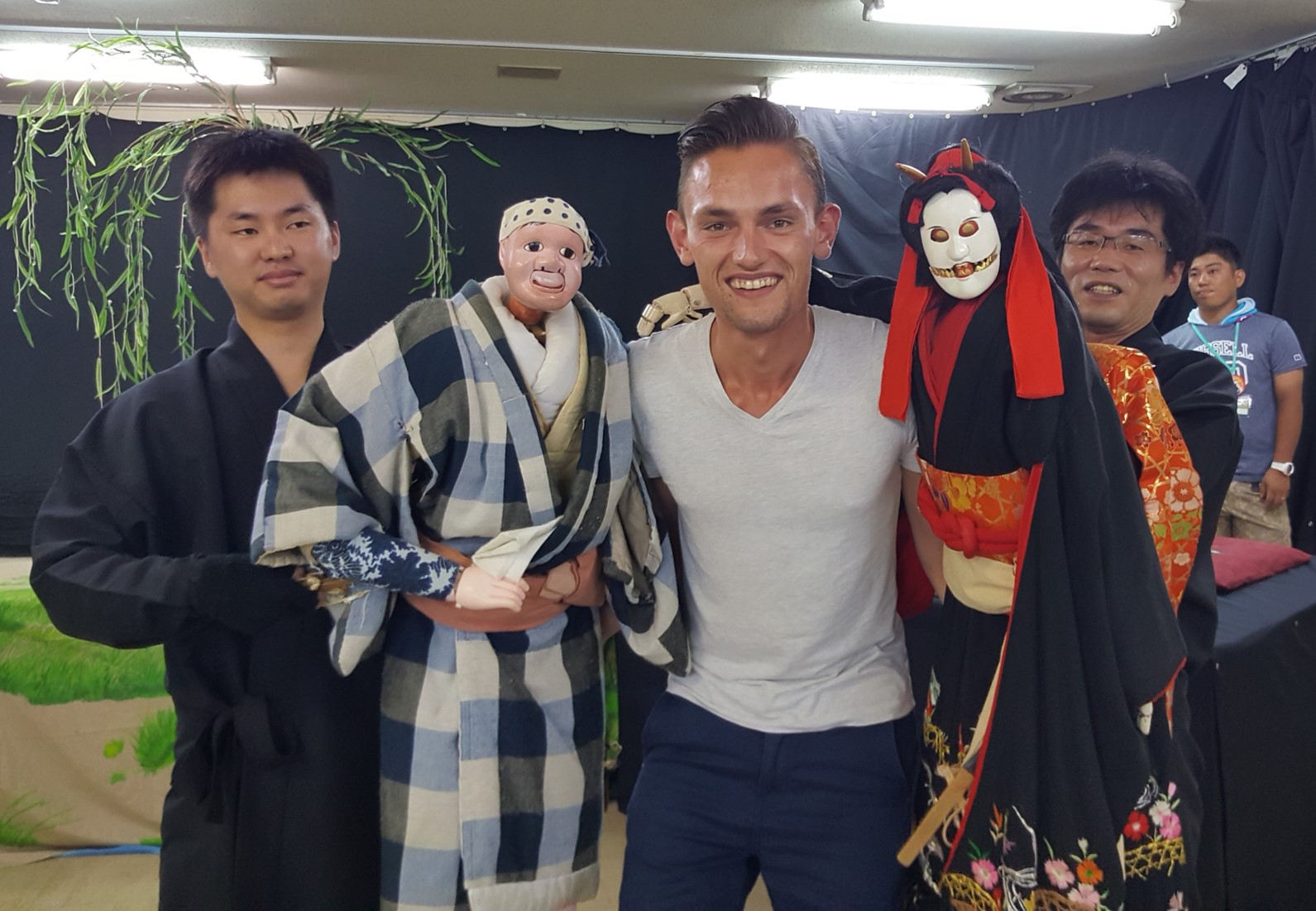 Finally, I would like to share my experience with Bunraku, which is what brought me to Japan in the first place. Bunraku’s goes back 300 years, which was very noticeable during one of their presentations. The sophisticated techniques that are used to make the puppets and the way they animate the puppets are incredibly fascinating. I thought it was gorgeous to see how three puppeteers animated just one puppet in such an organic manner and in tune with each other. I sat there watching with my mouth open and I will certainly take these impressions home with me to Leeuwarden.

Results of this trip

At the moment Leeuwarden 2018 are trying to bring the Bunraku performance to Leeuwarden in 2018. They are currently in talks with National Bunraku Theatre in Osaka.

In addition, I am researching puppet theatre in Friesland and Leeuwarden. How could we enlarge the platform for puppet theatre? Moreover, Iida Puppet Festa has inspired me to possibly organize a puppet theatre festival in 2018 in Leeuwarden myself. The findings of my research will indicate the feasibility and support for such an event. I would very much like to travel to Japan again to study the techniques and immerse myself in Japanese culture and Kuruma Ningyo Puppetry.