Extreme Internationalization
The two things I noticed on disembarking at Valletta after my flight from Rome were that many people were speaking English and the currency in use was the euro. Malta might well be the only such combination in the world, since Britain, which chose to leave the European Union in its June referendum, had not taken part in its currency union to begin with.

The young architect Chris Briffa met me at the airfield and as we drove into Valletta gave me a broad outline of Maltese history. Trade flourished on the island well before the present era, then from the ninth to the twelfth centuries it fell under the sway of Muslim empires. In the fifteenth century it became Spanish territory, and in the sixteenth the territory of the Knights of Malta, during which the Ottomans subjected it to the Great Siege of Malta. Later it was occupied by Napoleon, but the land power France showed little interest in the island and it later came under the control of the maritime power Britain. As a strategic point on the Mediterranean sea route to India, it became a hub of naval operations and so was bombed by the Axis countries during the Second World War. And then in 1964 it achieved independence as the Republic of Malta. Whereas internationalization remains an important task outstanding for Japan in the Far East, Malta has been living extreme internationalization for 2,500 years now.

A Dry Land
The road from the airport into town runs gently uphill and down. Nowhere is there any dense forestation, only dry hills cleared of vegetation. Annual rainfall in Malta is around 500 millimeters, about one-third that of Tokyo. November is when the rains come. As there are no year-round rivers, it is not suited to agriculture and the island achieves self-sufficiency in food of just twenty percent, half that of Japan. 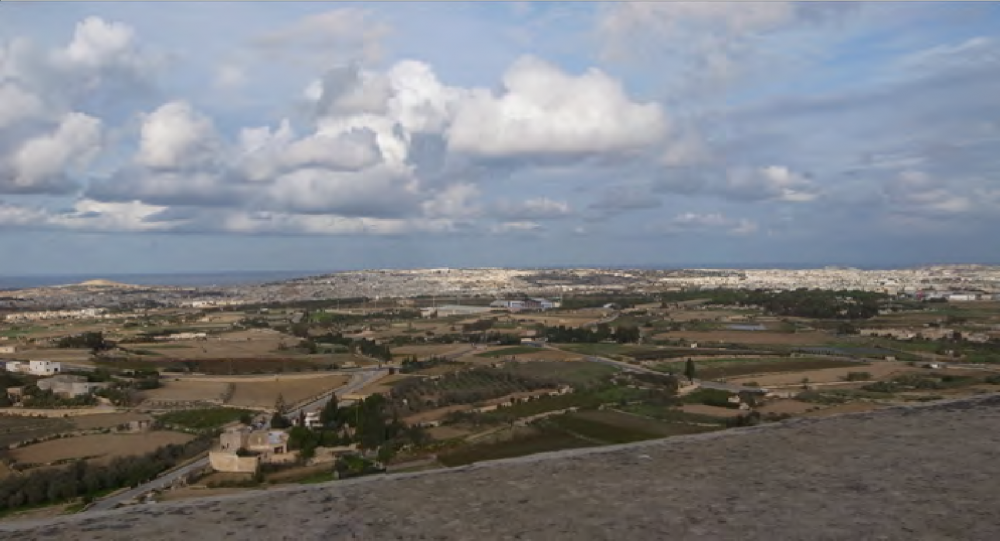 Guest House
Arriving in the limestone city of Valletta, I checked into a guest house remodeled from an old private residence. The building is one that Chris renovated as his own home, but when he bought another house nearby and renovated that one as his home and office, he put this one to use as the Valletta Vintage guest house via Airbnb. It is a three-story limestone structure built around 150 years ago. Jutting from the center of its second-floor facade is one of the wooden balconies characteristics of Valletta. My room was on the top floor, which had the highest ceiling. Directly outside my window I had a view of Fort St Elmo thrusting into the sea. On the roof Chris had added a terrace with a small kitchen and dining space with fine views of Valletta’s harbors, one to the north and one to the south. The rooms provided with contemporary comforts without disrupting the characteristics of the old building are made available to all the world via Airbnb. Here is a business model that works anywhere in the world, as may be seen in the traditional Kyoto townhouses that are increasingly renovated as guest houses. Underpinning it is the enthusiasm for a new sort of tourism among people who travel not for amusement, but to access the local way of life. This tourist activity in turn has motivated a rethink of residential and community modalities. 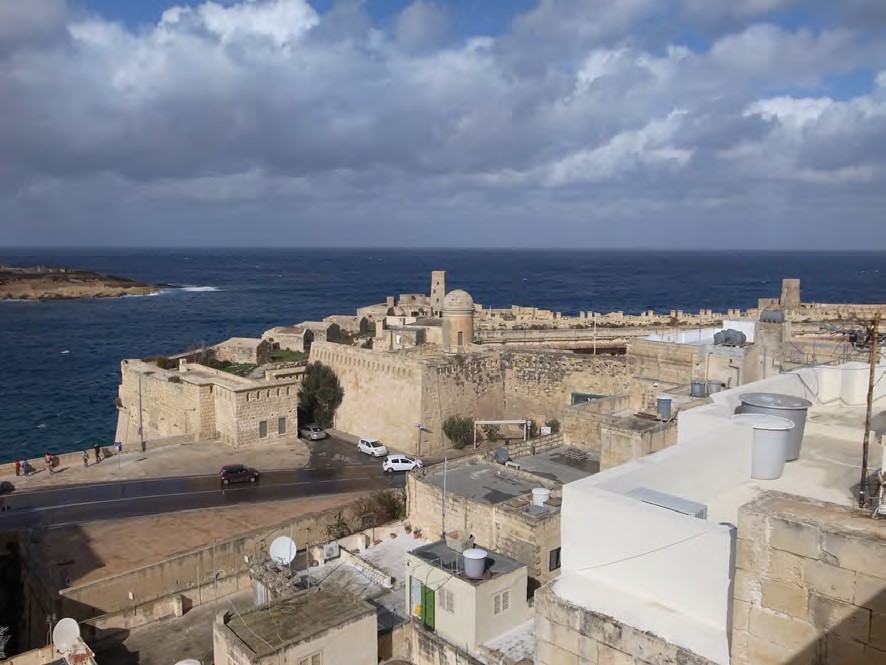 Restaurant
Not pausing to rest, Chris took me away for lunch. The southern end of town rises steeply like a cliff, and on the opposite side of the harbor, one sees the shipyards that once underlay Malta’s prosperity. On top of the cliff is an old garden, and its base is lined with warehouses along Quarry Wharf. One road runs landward of the warehouses and one seaward, making it seem sliced off from the city on its own. The warehouse enclosed by a hairpin curve joining the roads at the tip of this warehouse town has been converted into a restaurant called The Harbour Club. This is Chris’ design. He has made clever use of the underground space carved out of the bedrock. This underground space was in fact discovered in the process of demolishing the interior finishings of the restaurant’s predecessor. They say there are still places like this in Valletta. Spaces that people forget about while they go unused for a while are like time capsules. Joining us for lunch were two other participants in the panel discussion that would take place that evening. We enjoyed a meal of Mediterranean cuisine consisting mainly of fish. 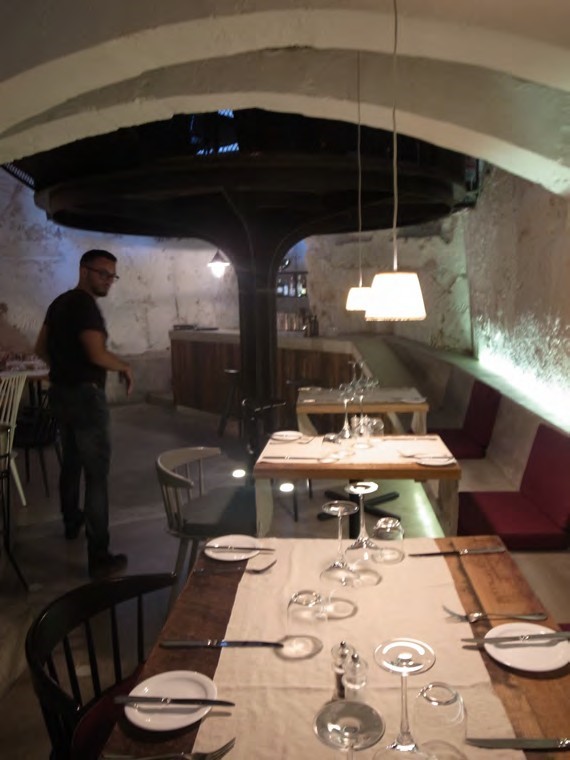 Underground space in the restaurant, on the left Chris Briffa

City Streets of Limestone and Balconies
After lunch, we strolled through the city. The city of Valletta is built on a peninsula jutting like a finger into a harbor with a bay. The landward castle gate and Fort St Elmo on the sea are joined by Republic Street, which runs along a horseback-shaped ridge, and the city streets run to its north and its south in a grid. From the highest point in the center, the drop to the sea is perhaps twenty meters or so. Most of the streets are hills, and at the end of many of them one sees the sea. The city is made up of buildings with shops on the ground floor and homes or offices on the third to sixth stories, their wall surfaces lining the streets gently unified by their facades of warm limestone. The colorful wooden balconies that overhang the streets enliven the scene. The balcony attached to the exterior wall of the Grand Master’s  Palace, the forerunner of these balconies, consisted solely of a roof and a guardrail, but as they came to be applied to private homes the balconies became enclosed. Structures resembling these balconies are found in Turkey and one may imagine a formal Islamic influence, but also the influence of British imports due to the lack of any timber available locally. In fact, the balconies of Valletta were part of the research on windows conducted by my research group at the Tokyo Institute of Technology as a fine example of distinctive windows comprising street scenery by way of their repetition. The results of the surveys performed by the students are included in Windowscape2, published by Film Art in 2014. 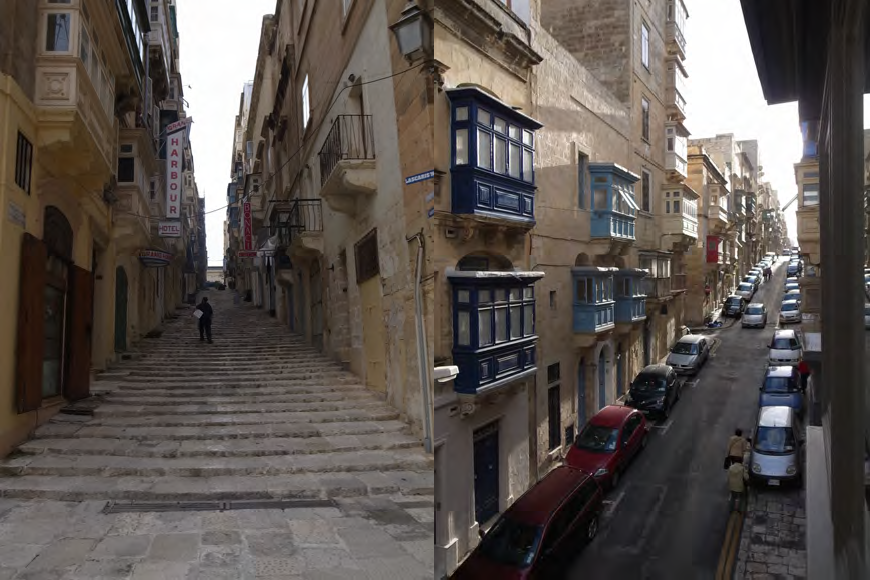 Leading down to the sea, a street in the form of a stairway     Wooden balconies overhanging a street

Recovery from Bombardment
Though at first I did not notice since almost all the buildings are of limestone, quite a number of them were rebuilt after the Second World War, when they were destroyed in German and Italian bombing. In particular, almost all the buildings in the neighborhood near Republic Square with a high concentration of shops were rebuilt when the square and roads were upgraded. Having seen a number of cities that suffered destruction in the Second World War – Tokyo, Milan, Munich – I can say that the way they were rebuilt postwar differs according to how they were destroyed, the type of bombs dropped on them and whether the original buildings were constructed of wood or masonry. In the sense that this determines the present form of these cities and the way people live in them, the Second World War is not a past event but still with us. Since modern forms have not been incorporated indiscriminately there and the city rebuilt much the way it was before, Valletta was able to achieve UNESCO recognition as a  World Heritage site and, as a sightseeing resource, is a mainstay of the national economy. 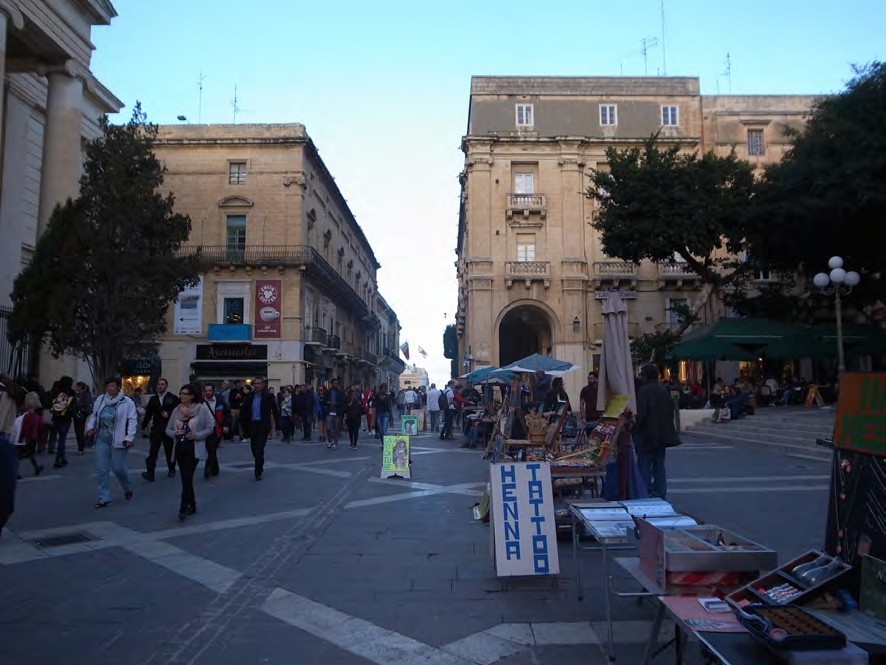 Republic Square, with postwar reconstruction to the right

Co-Cathedral
In the center of the city, also of limestone, is St John’s Co-Cathedral, built in 1572. The impression of a bland exterior, as of an unadorned Romanesque, is completely betrayed just one step inside. The interior is dominated by overwhelming baroque decor, redesigned by Mattia Preti in the seventeenth century. To start, the marble mosaic that covers the floor is made up of the lid of the sarcophagi of historical Grand Masters. The aisles are made up of eight chapels, each assigned to one of the “leagues” of the knights, grouped according to the language in the country sending them to the Crusades, and provided with a tastefully decorated altar to commemorate the deeds of knights who have served as officers of that langue. It is called the co-cathedral to indicate that it is shared by all eight leagues. A decorative space that covers the interior so densely indicates how much was expected of the Knights dispatched from their homelands to fight Islam and also a sense of competition among the leagues. As the wars continued, the adornments would have been added continuously so long as support for the front lines continued, culminating in an excess we might term bizarre. The crest of the Knights of Malta represents the alliance of eight countries merely by dividing the tip of a crucifix in two, truly a refined design. 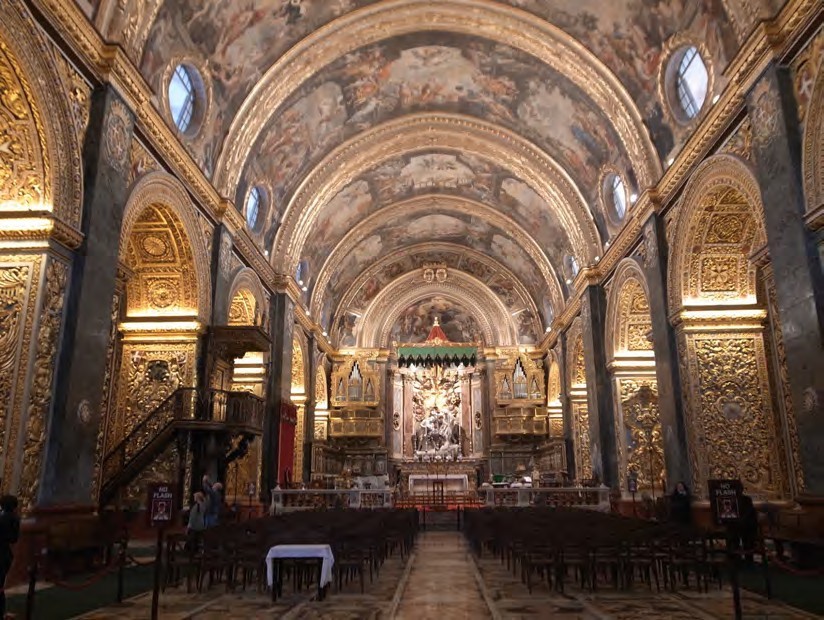 Design Dialogue 2016
On the evening of the ninth I spoke at the University of Malta on framing identification of resources for the reconstruction of commons and architectural design as a project lowering barriers that obstruct accessibility to resources. This was part of a lecture series called Design Dialogue 2016 organized by Malta Design Week. Chris had planned it together with his associates with a view to enlivening the debate among people studying design and working as designers in Malta.

With an audience of 150 or so, it was standing room only in the lecture hall. My address was followed by a panel discussion that brought in Libby Sellers of the London Design Museum, the Maltese architect Konrad Buhagiar and Caldon Mercieca, manager at the Maltese Cultural Directorate. The discussion continued until dinnertime, and the impression I took away was the resounding view that since Malta lacks any natural resources, its very people are its resource. 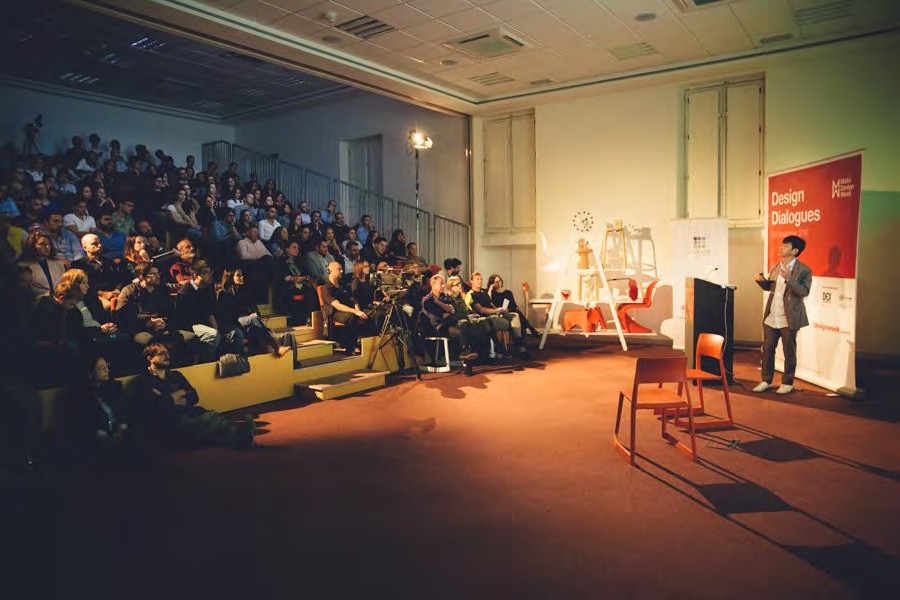 Valletta Design Cluster
The purpose of the Valletta Design Cluster is to encourage exchange and collaboration among creative people, and I was shown around the building that is the center of its activity by Caldon, who played an active role in its establishment. From Port Street at the southeastern tip of town, pass below the Avenue San Bastjan to enter a narrow lane and you find a building that once housed a bakery, no longer in use. Along either side of the lane running down the center are two-level spaces carefully partitioned. Now renovated, here is the home base of the design cluster. Concrete expression of the concept and the suggestion to take part in the project remodeling the buildings came with the opportunity of Valletta hosting the European Capital of Culture in 2018. We discussed the possibilities in exploiting the spatial composition of the existing structures and making the roofs into semi-exterior space for people to assemble. 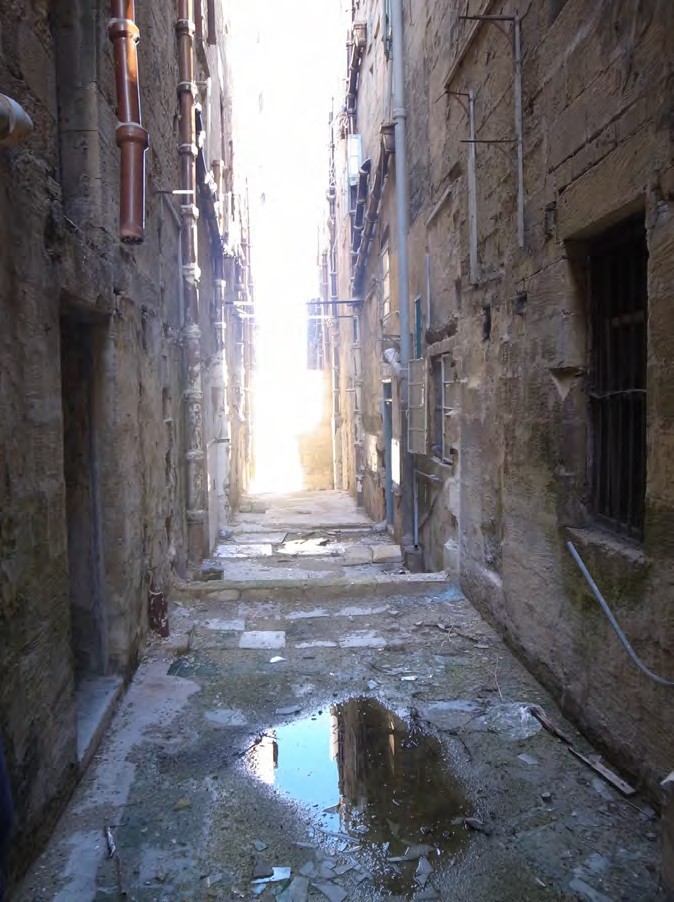 Lane down center of former bakery

Summary
Valletta is a most beautiful place. The large number of sightseers give it a lively appearance. The obverse side of this coin, however, is that there is little apparent spontaneous activity on the part of the people of Valletta, and I felt it would take some sort of measures to sustain a dynamic society here. A creative cluster is responsive to this sort of problem-consciousness and takes up the challenge of reconstructing a commons in the city. At Atelier Bow Wow we feel that we would like to make an active contribution to this project. I think this would also be a good opportunity to have a joint workshop or the like involving university students from Japan and Malta. It is precisely because Valletta has always been exposed to the waves of internationalization that one may look forward to a new dimension of exchange and collaboration on a human level. 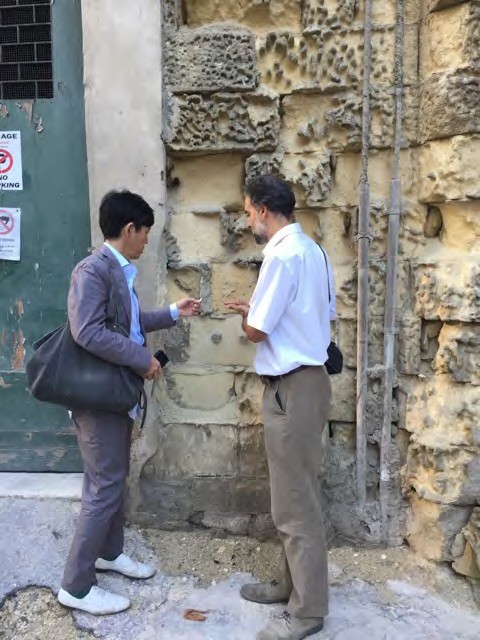