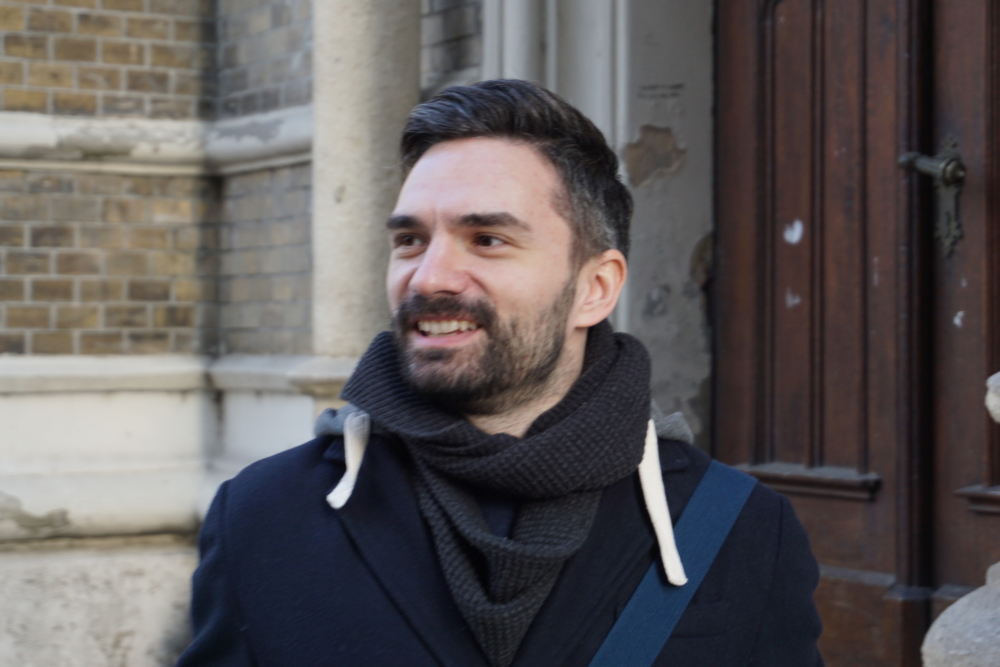 The team of the ‘Novi Sad 2021’ Foundation in 2019 slowly enters the countdown phase in preparation for the 2021. Large part of these preparations are pilot projects with Japanese artists and cultural workers in order to test our capacities and to make the audience in Novi Sad accustomed to events related to Japanese culture.

Decision to organize Origami workshops was fairly easy to make – as an activity, Origami attracts wide range of people securing participation aspect of the project, and there was an idea, very early on, to collect origami figurines made by the participants and make find an artist in 2021 who will make an installation out of these figurines.

After deciding to put Origami workshop in the plan for 2019, we combed through applications sent by Japanese artist through EU-Japan Fest, and we found Takako, young street performer and artist who, among other things, folds origami. Takako’s colorful presentation caught our attention immediately and we wrote an e-mail to Takako hoping she will accept to come to Novi Sad in April, just before spring break. Luckily, Takako was thrilled to come to Novi Sad. 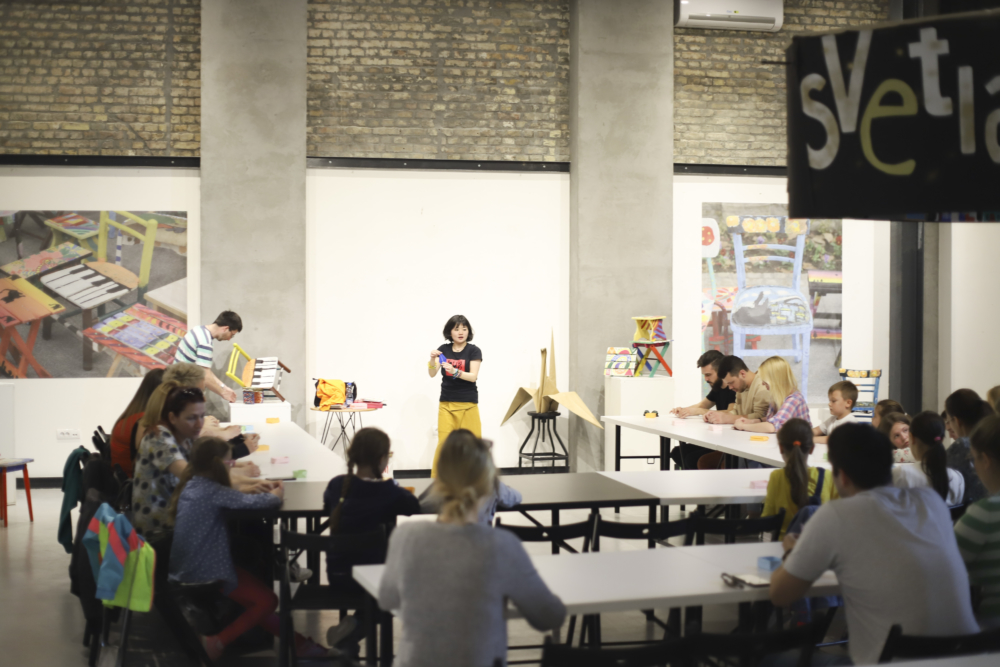 During her two-week stay, Takako held 11 workshops that were attended by around 200 people of all ages. The youngest participants were kindergarten children who tackled Origami folding with simpler forms. They were the most enthusiastic and talkative participants and were actively interacting with Takako in combination of English and Serbian languages. We also had a chance to learn that children in Japan start folding Origami very early, as young as 4 or 5.

Primary schools took active part in participation and sent many of their pupils to the workshops. Young teenagers were also very enthusiastic, but also quite frustrated trying to fold perfect cranes. Not all of them succeeded, but we can say with certainty that all of them had fun. They also treated Takako as a celebrity, since she was the first person from Japan. Who knows how many photos of Takako with children were shared on their personal Facebook and Instagram accounts.

In our effort to bring as many people who are interested in Japanese culture to the workshops, we contacted the local associations called ‘Mirai’ dedicated to promotion of Japanese culture in Novi Sad. They had a special edition of the workshop, inviting their members and associates to spend the evening folding origami in the ‘Svilara’ Cultural Station. The interest was so high, that the places in the online application filled in just two days. This lead to the idea to organize future Origami workshops jointly.

Hanging out with people from ‘Mirai’ organization was not limited only to Origami folding. Small group of ‘Miari’ representatives, together with one of the managers from the ‘Svilara’ Cultural Station, took Takako for a short field trip to Sremski Karlovci – picturesque small town on the slopes of Fruška Gora Mountain, some 15 km south-east of Novi Sad.

In order to maximize the exposure of Takako’s workshops, we organized one of them during the big meeting of volunteers who are active within the Novi Sad Volunteer Platform established together by Novi Sad 2021 – European Capital of Culture and Novi Sad 2021 – European Youth Capital. Having in mind that the Novi Sad Volunteer Platform has several thousands of registered volunteers of different ages, we had a chance to include wide range of socially responsible people of different backgrounds, ranging from students of the University of Novi Sad to retirees who in their 60s and 70s still have energy to participate in and contribute to cultural life of their city. 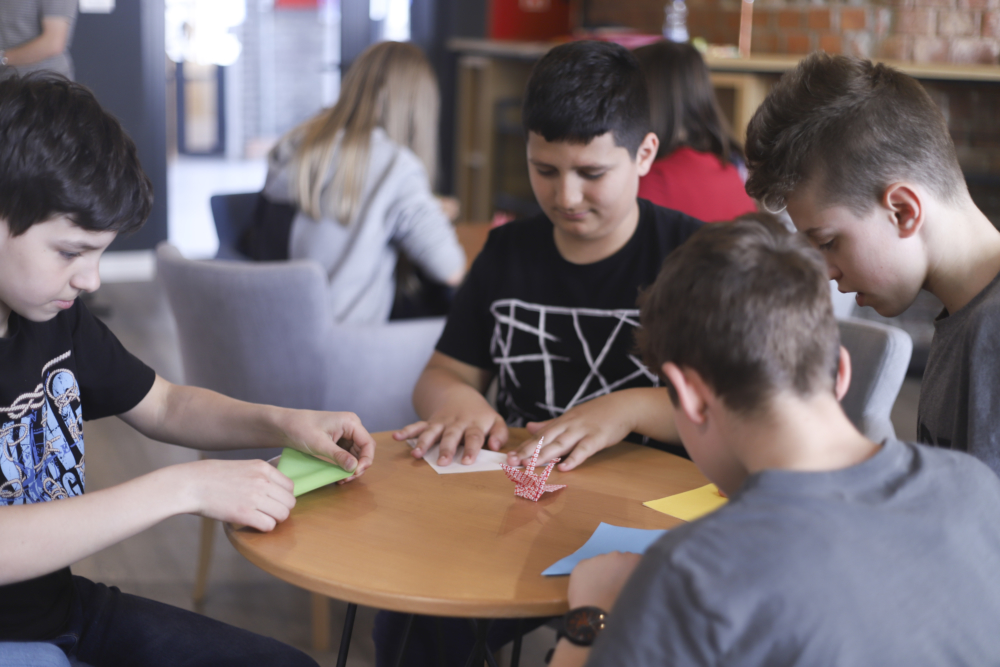 Another special workshop was organized in the offices of the ‘Novi Sad 2021’ Foundation for the people working within the ‘Novi Sad 2021 – European Capital of Culture’ project. In a relaxed atmosphere, where we teased each other on how successfully (or less successfully) we folded Origami, we discussed with Takako the European Capital of Culture project, how we prepare it and what we plan to do in the year of the title. Therefore, origami workshop turned into an informal team building event.

As April days passed, some of them sunny, some of them rainy (luckily Takako loved the rain), we drew to the end of our program and Takako’s visit. After 11 workshops with around 200 people, several interviews for local televisions and radios, field trips, discussions about culture, learning how to fold Origami, how to count to 10 in Japanese and an emotional phone call filled with ‘thank yous’ and ‘arigatous’ – we concluded the first successful pilot project within cooperation between EU Japan Fest and ‘Novi Sad 2021’ Foundation. However, this is just a start. Several more programs are due this year and we also start to think about future Origami workshops in 2020 and 2021. We collected around 250 Origami figurines for the big installations. The symbolic goal is to collect 2021 of them, which means we still have a lot of work ahead of us. Luckily, this work means more Japanese artists and culture in Novi Sad. 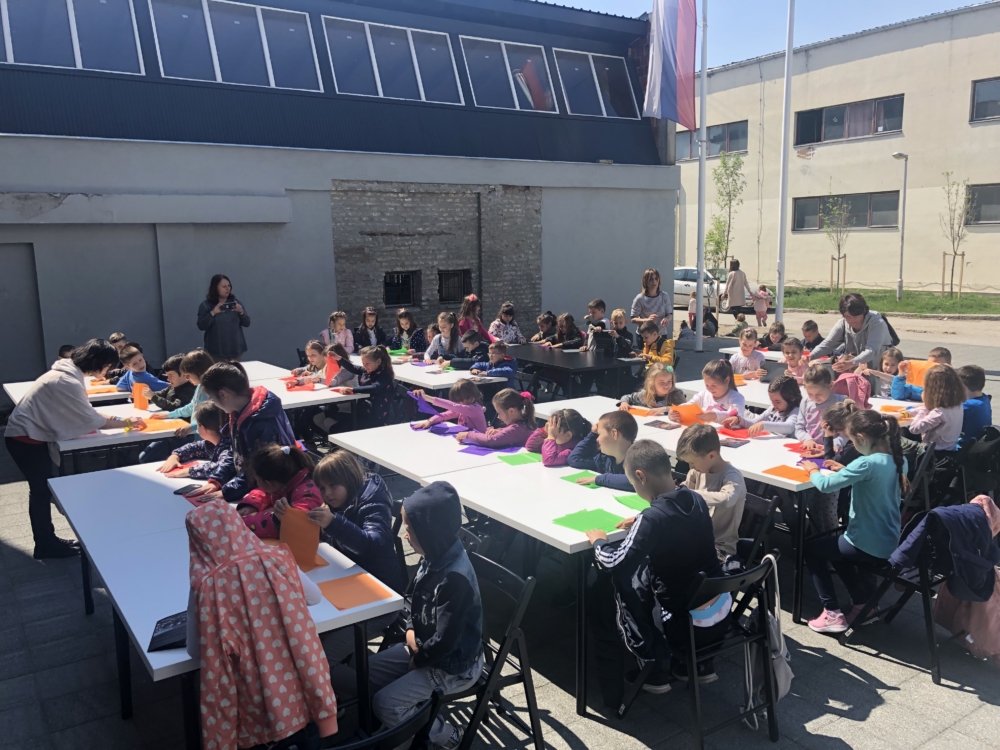