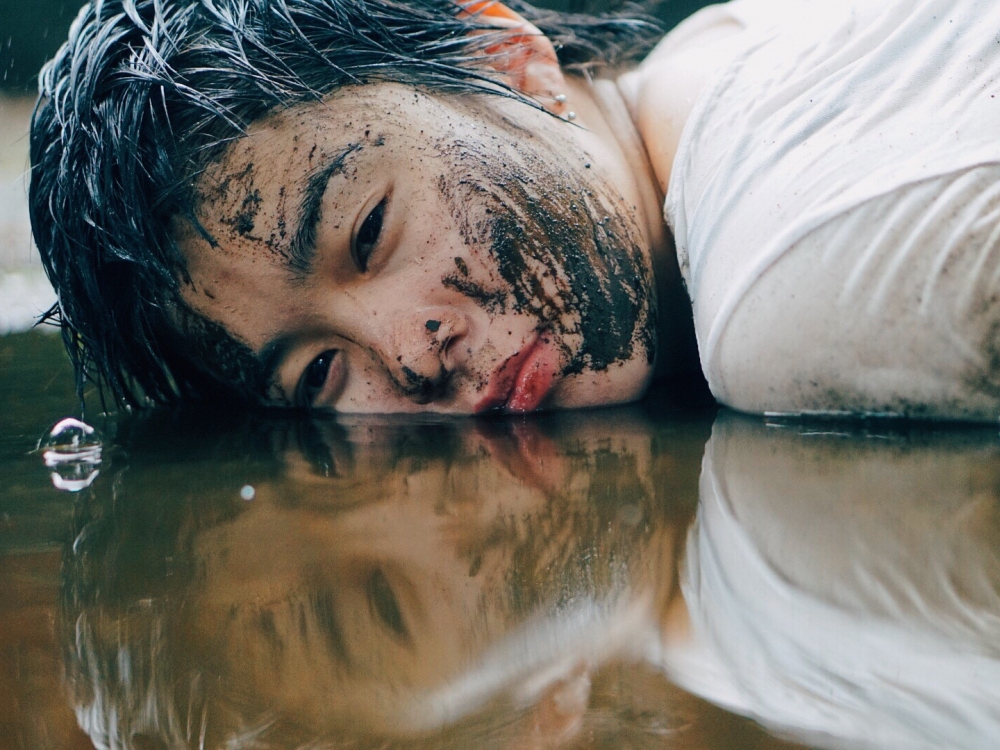 Given the opportunity to take part in the Fifth BODY.RADICAL International Performing Arts Biennial in the Hungarian cities of Budapest and Pécs, I delivered a solo piece and an improvisational performance. This was my first performance overseas. What led to my taking part in this festival was showing my work in Competition II, for new choreographers, at Yokohama Dance Collection 2017, held in Yokohama, Japan, in February 2017, where I was awarded the Touchpoint Art Foundation Prize, which was my ticket to the Hungarian festival. This prize is ordinarily awarded to an entrant in the open field of Competition I rather than one in Competition II, so I am full of gratitude to BODY.RADICAL Director Batarita for providing this opportunity to me as a Competition II entrant. I had thought that it would not be for quite some time yet in my creative life that I would present work overseas, so I was astonished by the invitation to Hungary. At the same time, the very unusualness of my selection made it all the more important for me as a representative of Japan not to let the opportunity go to waste, and I steeled myself for it. 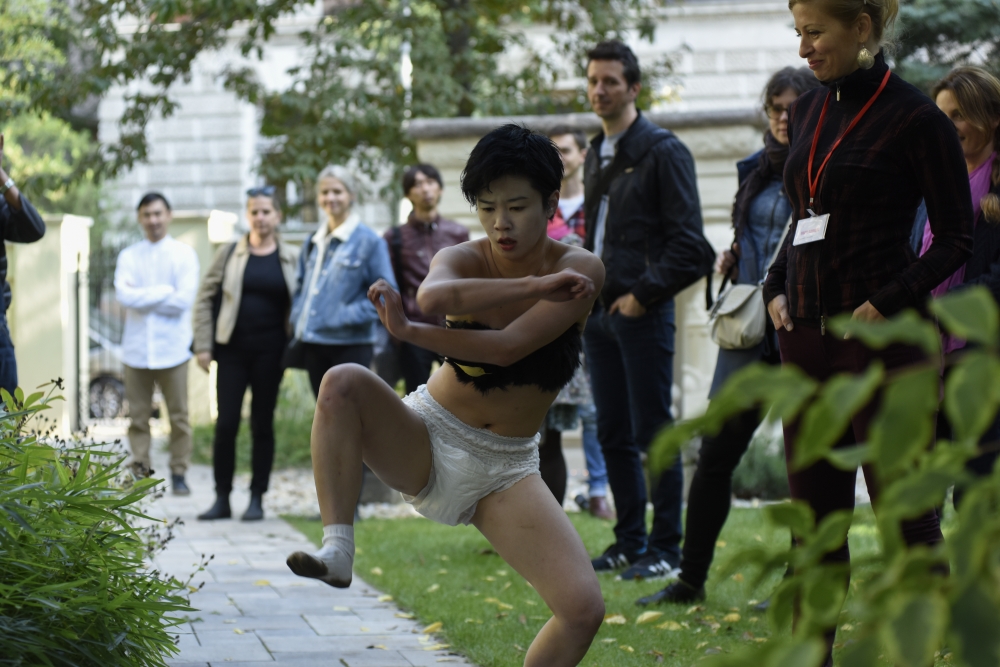 The work I performed in Hungary was a piece called “Monkey in a Diaper”. In creating this piece, I took inspiration from a work by the Japanese author Shinichiro Kurimoto called Apes in Pants. In this book he writes that as creatures people are merely naked simians needlessly wearing pants. Humans are just naked apes that systematically engage in bizarre behavior, putting pants on and taking them off, using gestures of undressing to entice males. He goes on to explain human behavior reading pants in such human actvity as sexual behavior, law, ethics and religion. Of these, “Monkey in a Diaper” focuses on the aspect of religion. In creating this solo piece, I sought to connect it to the sarin attack on the Tokyo subway system carried out by the Japanese religious group Aum Shinrikyo in March 1995. Presenting the piece overseas, however, raises a major issue. The vast majority of Japanese have heard the phrases “Aum Shinrikyo” and “sarin subway attack”, and so we can expect them to know, to some extent, what happened. But not only is there no telling to what extent people overseas might be aware of the incident, one imagines their ideas about religion are very different from those of Japanese people. If such were the case, it made how to present this piece an important question for me before I left for Hungary. I considered using a projector to display text describing Aum Shinrikyo during the performance, but thought it not a very good solution because then the Aum attack would overshadow the actual substance of the piece. And so I decided on taking the piece to Hungary as is, rather than showing a localized version. The reason why is that I considered this would make apparent the essence of my work and physical expression. I felt that when I presented the piece in Japan, much of the commentary on it had more to say about Aum Shinrikyo than about my physical expression. This opportunity became for me a test of confronting the audience directly with the physical expressiveness of the human being Reisa Shimojima rather than the subject of the work, its conceptual aspect. 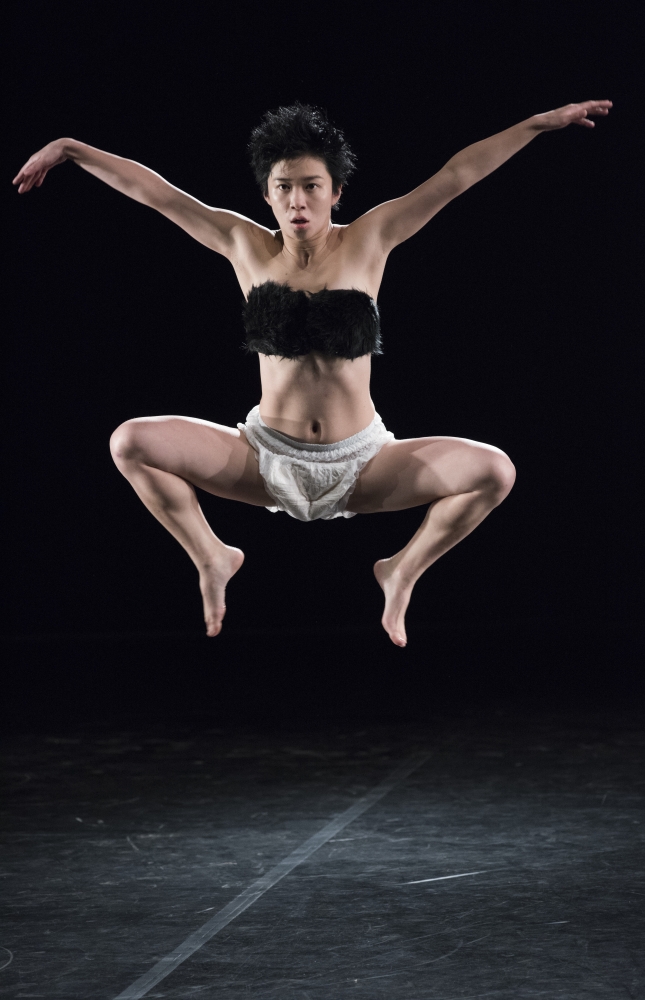 Along with five artist selections from Japan, Korea and Taiwan, the festival also featured performance in an omnibus format. To perform in Hungary along with other overseas artists was a very international and valuable experience for one making her first overseas appearance. And as I mentioned above, it provided me with major discoveries and questions. After my performance, people involved with the festival and viewers from the audience provided me with a variety of views, as did the other Asian artists appearing. Their views made me aware of concepts running through all of my work and of what it is that, in dancing, I consider of personal importance. The concepts of gender, for example, and infantility and maternity. I had a strong sense from among the audience of, and was strongly moved by, the force they showed in seeking to feel the work. What I heard from people running the festival was that Hungarians are little interested in grasping the concept of a work. It seems that what is important to them, in other words, are their own thoughts and feelings in the moment of viewing a work rather than its author’s concept or its accuracy. This struck me as splendid when I heard about it. For an uncertain genre like contemporary dance to gain a greater profile, I think it will be very important for audiences viewing a work to invest it with their own will, rather than watching passively, and evaluate it on those terms. The great assumption here, of course, is that artists will release high-quality work into the world, but I think an enriched awareness on the part of audiences is also very important. Taking this into account, the work I presented in Hungary was in part still premature. The less one knows from what vantage point an audience will view a work, the less excuse there is for slacking. It is not straightforward for the author herself to complete her work. She must approach it from many different angles and challenge it with many different questions. Unless her own dance evolves – in terms of concept, physicality, necessity, unpredictability, overall rhythm, etc. – as she questions it herself, audiences will grow bored with it. It was only because I showed work in a foreign land with a different language and culture that I became aware of this. It will still apply, however, whether in Japan or overseas. After all, people live their lives amidst different sensations and ways of thinking. What I gained from this experience is that this is precisely why it is important to bring a broader perspective to the creative process.
With this first overseas performance I had the strong impression that, although language and culture vary from country to country, creative work is laid bare onstage across national borders. It’s frightening to expose something this way, and at the same time it is most impartial. And it is precisely this that makes me want to create work that finds interest across national borders. In what ways can we live, in what ways enjoy ourselves within this uncertain genre? After my Hungarian experience, I tremble with excitement at what comes next.
BODY.RADICAL was a wonderful festival where I enjoyed much international exchange and interaction. I would like to express my heartfelt gratitude to Director Batarita, who extended me this opportunity, and to all the festival staff. 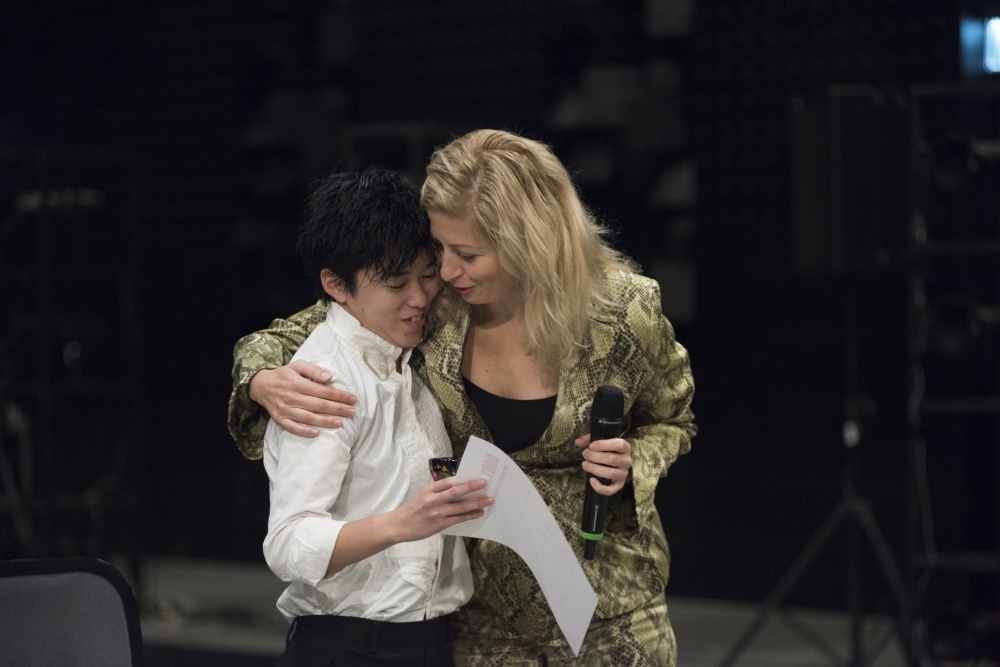