HOME > Column > Feeling like getting to know what“tradition”really means 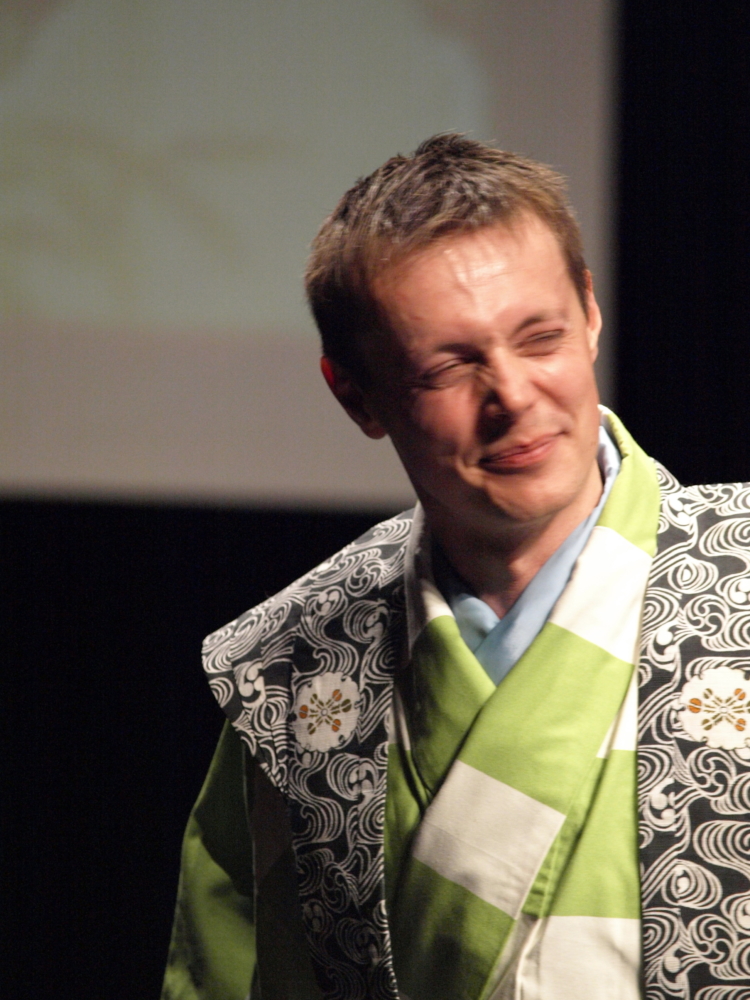 In 2000, our Master Shigeyama Shime had come to Czech Republic, taught us basics and we performed play “Persimmon thief” for the very first time. Next year it will be 20 years since that. In that time, we just copied his techniques, voice expressions – and did the same on the stage. People were laughing. But with each performance after then, we were more and more impressed by what kyogen really is. Through extremely simply looking expressions, Kyogen can extremely attract heart of audience. Yeah, that’s great and we want to continue.

In 2002, I got the great opportunity to start with practice as a Shigeyama Shime’s disciple in Kyoto. Beginning was extremely hard. Barely understanding Kyogen texts, having no idea about techniques, usage of costumes, etiquette, completely unknown world. But as days passed and I had chance to be on lessons, could see professional actors and pro-disciples, I stared just copying their actions. And step by step, felt like I got to know something. At that time, I thought that practicing myself is the hardest thing I can do. 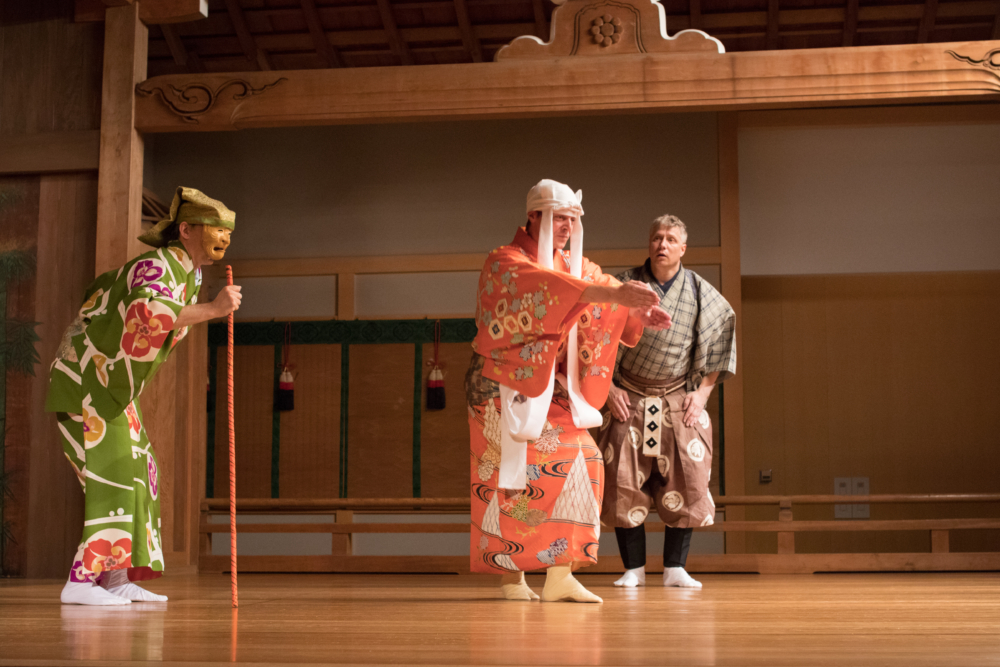 Shigeyama Shime and his sons started to come to Czech almost every year and also my colleagues had chance to touch Kyogen in Kyoto. “Yeah, Kyogen is great and we want to continue”- was the personal feeling of all of us. While I was still in Kyoto, other members formed “Nagomi kai Czech”(Divadlo kjógen) in Czech Republic and started to perform Kyogen regularly. Up till now, Kyogen was performed in Czech language for more than 800 times. What play from original repertory, consisting of more than 200 plays, should we introduce to Europe? How to translate it and how realize it on the stage? 8 Czech people kept working on this.2 heads are better than one. Taste of Czech Kyogen got to deeper levels.

From experience of performing Kyogen in Czech, we can clearly see, how complex, precise and excellent genre Kyogen is. Even being translated, even being performed in country with different culture and historical background, even being performed by foreigners, Kyogen became so popular, that there is a performance almost every week. Clever servants foolishing their masters, strong women scolding their weak husbands… The message inside Kyogen plays is clear. Even more than 600 years had passed, we can still laugh on borders crossing human stupidity. And humans, haven’t grown up at all. Time to time, after playing “Foxes from Sado Island”, which perfectly portrays bribe, some people from audience come with comment: “Today, that bribe scene, it is new text, isn’t? Pass my congrats to the author, that one was brilliant”. I would truly love to pass that feelings to the author of 600 years old play. It is crystal clear, how great Kyogen as a genre is.

It is obvious, that Kyogen can become popular as genres of world theatre. Sushi became world famous food and visitors of Japan want to taste the original sushi taste in country of its origin. The same can happen to Kyogen. Tourists traveling to Japan can set up Noh theatre visit as one of their goals. With rising popularity of sushi, some kinds of tuna fish got to “near threatened animal”. But Kyogen worldwide popularity would bring only good. 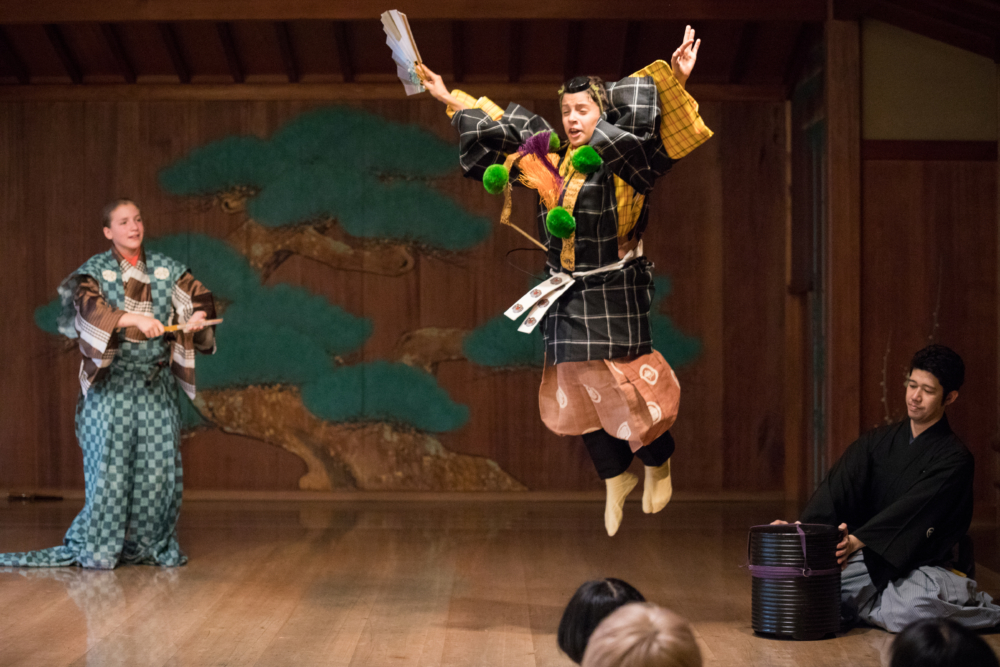 Next year it will be 20 years, since Shime Shigeyama came to teach to Czech. Most of us were in our twenties and we got 20 years older. During this 20 years, with every small success, our passion to continue with Kyogen get stronger and stronger. We tried to brush up our techniques, level up our voice expressions. We focused, how to get ourselves to higher level. And now, there is new goal in front of us. To be able to continue after another 10 or 20 years from now, we urgently need to get young people into our team. 20 years ago, the very start, was not so hard as we thought. Teaching kids and young new people is new challenge, where we feel insecure. Still being far away from technical level of Japanese professionals, we need to teach. But if we once got so far, we want to continue. Working still on improving our own skills, there is no other way. When one starts to teach another people, that one feels much more responsible for his own techniques. This kind of nervousness is as new as inspiring. And also, team couch do not need to be excellent player, to be still capable of supporting young members to grow up.

It is a question, if kids, who are studying Kyogen in Czech, will keep their interests in the genre unchanged, even they get to high school. Would any of them study Japanese? Will any of them go to Kyoto for Kyogen training there? No one knows. But there is no other way to find it, than to teach basics in Czech, get detailed instructions from Japanese professionals and step by step widen repertory. So let us walk this way. To keep tradition fresh and alive, this “transmission” is urgently needed. Even Kyogen tradition goes as far back as 650 years, it doesn’t mean, that Kyogen is just old. Term Tradition in Japanese consists of 2 characters. 「伝+統」 – which means “transmission” and “Get unified”. Transmit all obtained knowledge to next generation. In Europe, English term “Traditio” has exactly same meaning. Tradition – late 14c., “…or practice handed down from generation to generation,” from Old French tradicion “transmission, presentation, handing over” (late 13c.). Regardless country of origin, we need to use the same tolls. 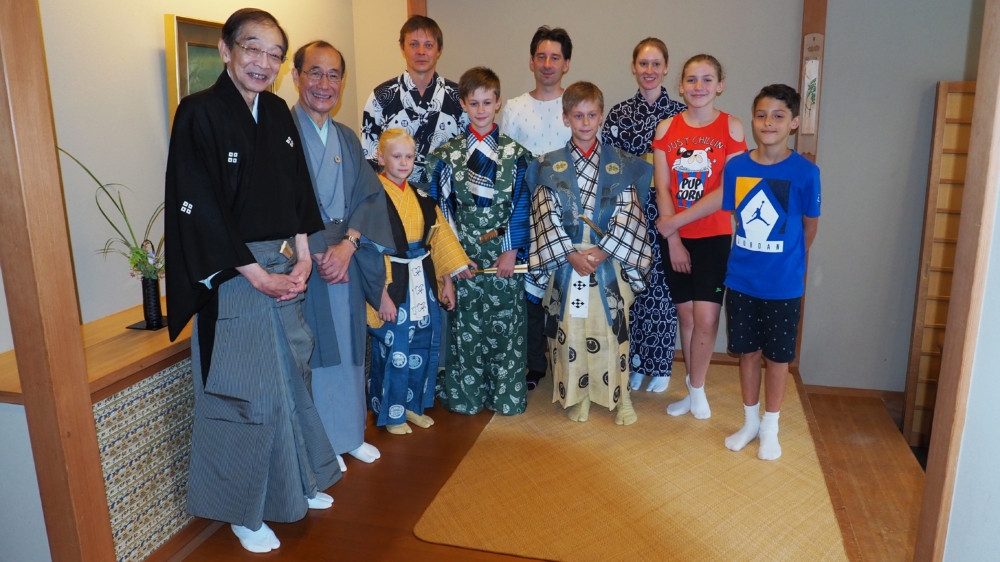 In last 20 Years, we reached several successes. But after we will not be here – and next generation will still continue with Kyogen performances in Czech, finally that could be called as a real success. We express deep gratitude to everyone and all, who had taught us, supported us, helped us. And because we got so far due to all this support, we definitely want to continue. Next 20 years, at least.