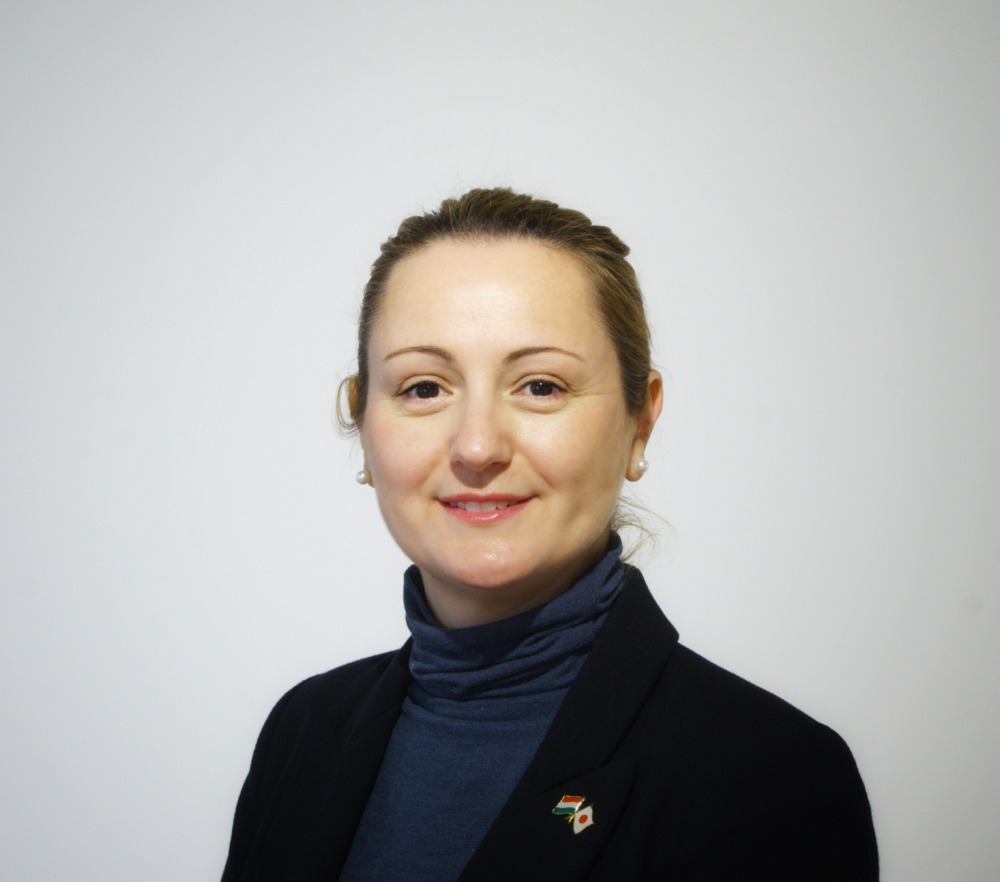 The Visegrád Group (V4) was established in February 1991 in Visegrád, northern Hungary by the presidents of Czechoslovakia (now the Czech Republic and Slovakia), Poland and Hungary with the aim of advancing friendship and cooperation among the member countries. This year is the group’s 31th anniversary, and to coincide with Hungary’s relinquishing of the annually rotating presidency in June 2022, with the cooperation of the Minato-ku Mitakai, a closing concert was held in the North Building Hall at Keio University’s Mita Campus.

This concert comes under the category of “music,” and while this is just one of the many categories in which Japan and the V4 maintain links, it is an extremely important one. Performers included the Javorkai brothers, who had travelled to Japan from Hungary, as well as other musicians with connections to the V4 member countries. The program comprised pieces related to each of the four countries and aimed to highlight their friendly relations and introduce their history and culture, taking the audience on a musical journey.

Proceedings got underway with a welcoming speech by the Hungarian Ambassador, and continued with music from Hungary, Slovakia, the Czech Republic, and Poland in the order in which the V4 presidency rotates. The Hungarian component consisted of Popper’s Hungarian Rhapsody (Op. 68) performed on cello and piano, Kodály’s Couple Dance of Kálló performed on violin and piano, and an arrangement by the Javorkai brothers of Hubay’s Scènes de la Csárda No. 4 “Hejre Kati” (Op. 32) performed by a piano trio consisting of the Javorkai brothers and pianist Ayako Harada, who has played with the brothers previously. 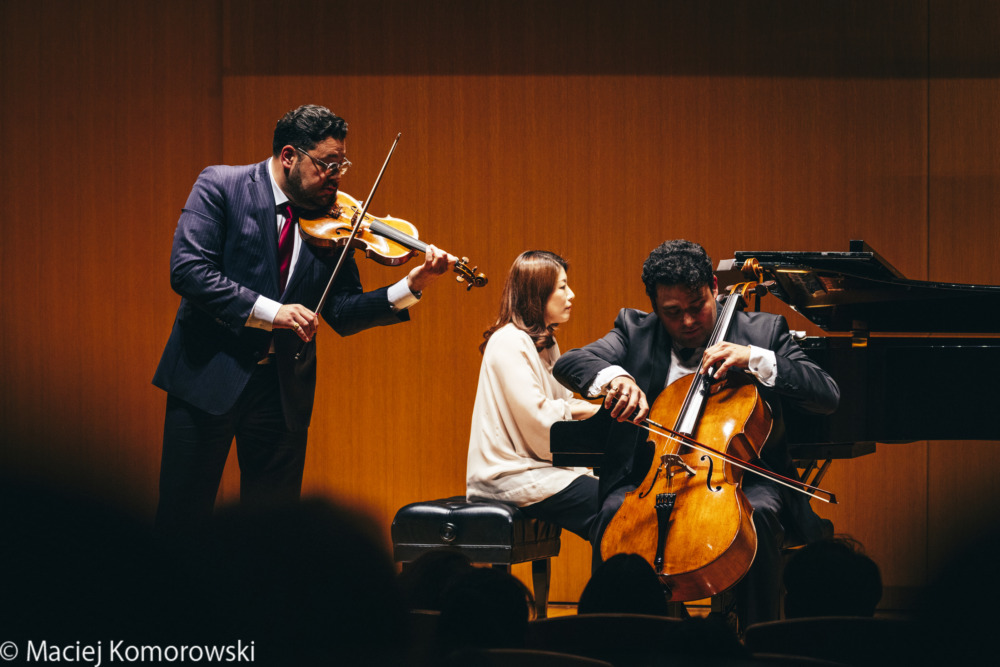 In 2009, the Javorkai brothers were together named Artist of the Year by Jeunesse and Bank Austria, regarded as Vienna’s equivalent of a Grammy Award. They are both members of the Mozarthaus Vienna String Quartet, a quartet officially recognized by Mozart House, the only extant former residence of Mozart and now a museum. During their visit to Japan, they also performed with Ingrid Fuzjko Hemming.

Pianist Ayako Harada was born in Aichi prefecture and after completing her studies at the Graduate School of Music at Aichi University of the Arts she studied overseas at the Liszt Ferenc Academy of Music in Budapest. Among numerous honors she placed first and received the Valentino Prize at the 18th Valentino International Music Competition and won a special award in the solo recital division at the Nagoya Citizens’ Art Festival. She currently instructs students at Aichi University of the Arts and elsewhere. Harada’s piano blended superbly with the brilliant technique of the Javorkai brothers, and the venue came alive as it was immediately enveloped in the atmosphere of Hungary. As an encore, the trio performed Sarasate’s Zigeunerweisen.

The Slovakian component of the concert consisted of ten pieces (1–3, 5, 6, 8, 12–15) from Ján Cikker’s What the Children Told Me, a collection of short pieces for piano, along with Cikker’s Dupak, a piano piece for four hands. Born 110 years ago, Cikker was one of the leading Slovakian composers of the 20th century. The scores for the two works performed on this occasion were procured and prepared especially for this concert by the two musicians, Kensei Watanabe and Arashi Kawamoto. Watanabe and Kawamoto graduated from the same university and both studied at the Liszt Ferenc Academy of Music in Budapest. They are also both recipients of Hungarian government Stipendium Hungaricum scholarships. Using a 1912 Bösendorfer piano he brought back with him from Budapest, Watanabe performs based on the concept “old is new.” Kawamoto placed first in the Emerging Category at the 29th Roma International Piano Competition and is currently studying towards a doctorate at Toho Gakuen Graduate School. The moment the first piece began, the atmosphere in the venue turned into Slovakia, and during the piece for four hands, the two pianists drew the audience in with their superb coordination and dialogue.

The third part of the concert consisted of a piano trio performing parts 1, 2 and 6 of Piano Trio No. 4 in E Minor “Dumky” (Op. 90) by the leading Czech composer Dvořák. Continuing on from the previous component, Arashi Kawamoto appeared on piano, with Kaoru Aiura, who like Kawamoto studied at the Liszt Ferenc Academy of Music and received a Stipendium Hungaricum scholarship, on cello and Hanako Matsumoto, who is doing research on Dvořák as part of a doctorate at the same Toho Gakuen Graduate School as Kawamoto, on violin. Aiura entered the Liszt Ferenc Academy of Music after graduating from the Department of Music at Soai University in Osaka, and is currently instructing students at several music schools while also giving performances. The audience was captivated by the trio’s thoughtful interpretation of this famous work.

In the final part, the audience was treated to several beautiful piano pieces by Polish composers. Pianist Megumi Shimanuki performed Chopin’s Mazurkas (Op. 24) and Polonaise in C-sharp Minor (Op.26 No.1), as well as Paderewski’s Minuet in G (Op. 14 No. 1). After studying at the Liszt Ferenc Academy of Music on a Stipendium Hungaricum scholarship, Shimanuki entered the State University of Music and Performing Arts Stuttgart where she received a Konzertexamen degree. She has worked as a répétiteur at the Liszt Ferenc Academy of Music, was awarded the Zoltán Kodály Prize by the Foundation for the Kecskemét Kodály Institute Hungary and is currently a full member of the Frédéric Chopin Society of Japan. She also gives performances as a Saitama City Cultural Promotion Foundation registered artist. Organized around dance music, the program gracefully guided the audience to Poland, the final stop in their musical tour of the Visegrád Group countries. 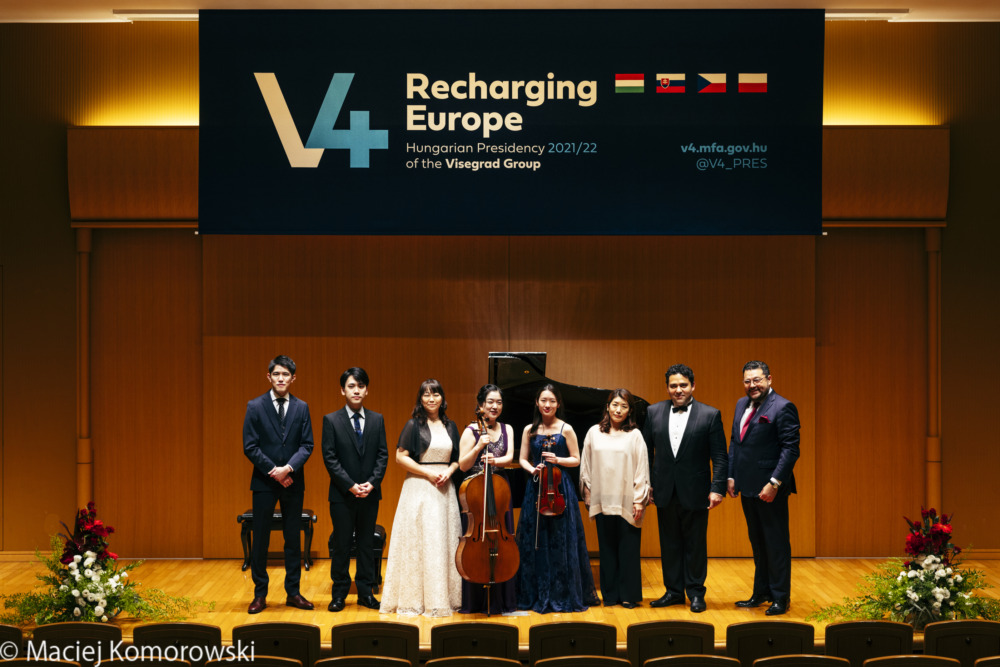 The venue was practically full with an audience that included ambassadors from EU countries and company directors, and at the end of the concert many warm messages were received.

In closing, I would like to thank everyone at EU Japan Fest, Keio University and the Minato-ku Mitakai who cooperated in staging this concert, as well as the many other individuals who helped see it to fruition.