HOME > Column > Voices! Projet La Voix des Poètes, a mystery that could not be solved before the 20th century!

[Vol.252] Voices! Projet La Voix des Poètes, a mystery that could not be solved before the 20th century! 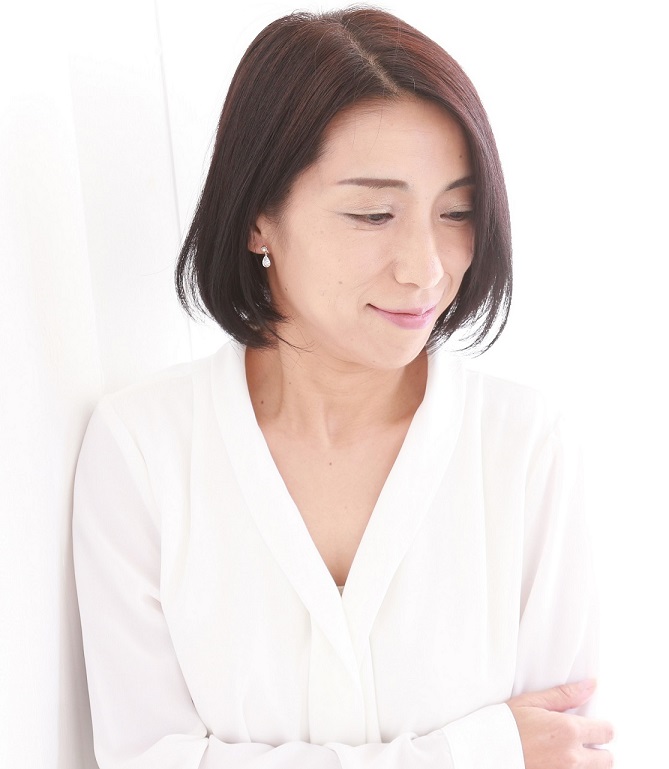 Every path always stretches toward the light. Here is a path. It is a path of unmatched voices in the world. It begins here, in the small island nation of Japan.

The art performance Projet La Voix des Poètes (Poet’s Voice) is a project produced by poet and reciter Taijin Tendo that aims to restore the voice to the flesh.
Projet La Voix des Poètes began on October 14, 2006, with the voice of Kazuko Shiraishi, one of Japan’s leading poets.
The aim of the project is to make Tokyo a city where poets can be heard unvoiced at any time, and at the same time to train the voices of poets and writers so that beautiful Japanese can be heard around the world.
The project, which is characterized by performances in unison, without microphones or music, is the creation of a place where, in this age of digital sound, we can come into full contact with the unvoiced, and reawaken our faith in the power of words that makes us human. Focusing on the poet’s own internal rhythms, it is a simple attempt to stand alone with only a single voice and a single body, but it bears much fruit.
Away from the written word, the newborn poems heard by the ear are as warm as a newborn baby’s voice. The poet’s voice exists as a mother’s womb to question the primordial nature of poetry. 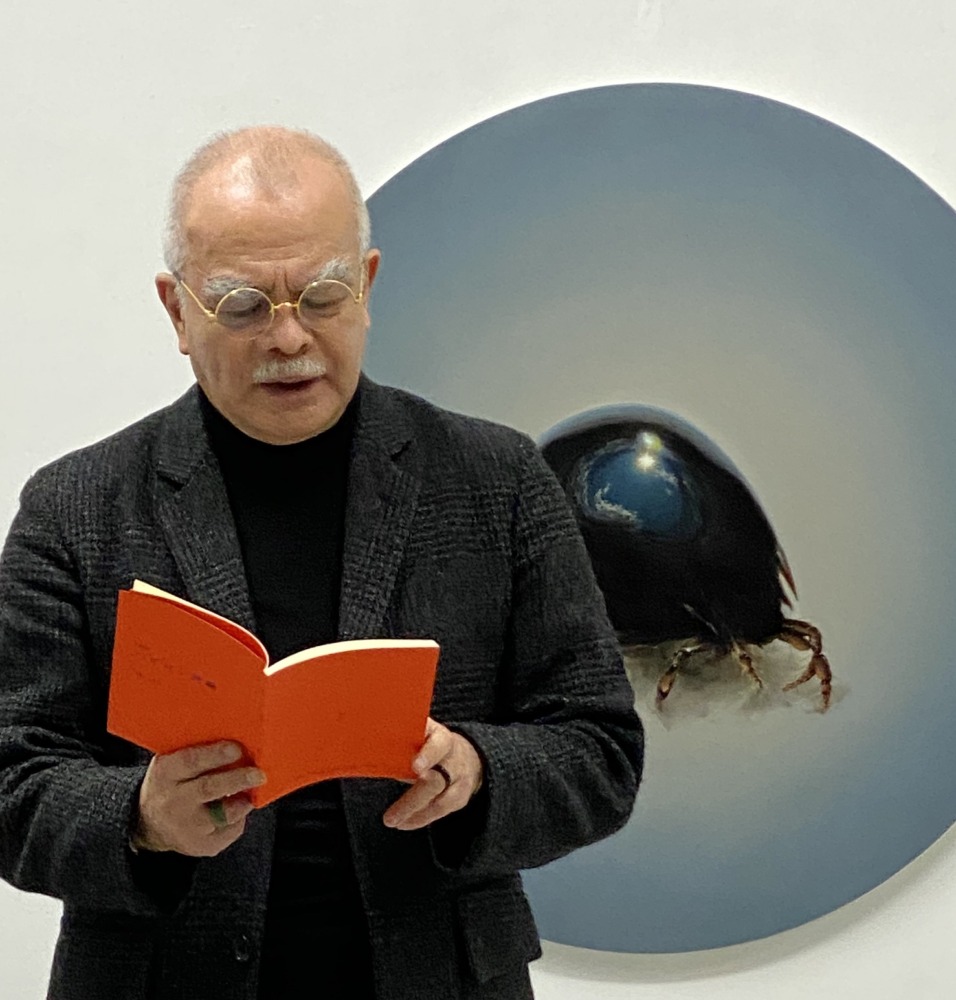 I have now participated more than 60 times. The project is a once-in-a-lifetime opportunity to share with the audience the dynamic generation of words and fresh utterances while feeling the changes of the seasons.
The voice is a once-in-a-lifetime experiment. With the body and place of the poet in the flesh, the power of his breath fills the space-time, and a world of words rises up, with only the invisible voice.
The presentness of the poet is always questioned, and the world of each poem and the writer’s true form are straightforwardly expressed. After many years of participation in this project, I shook off my pre-existing self and felt the emergence of an unknown “I.” In April 2009, the fourteenth time I participated in this project, I changed my pen name and reformed myself. Breaking the vessel of my past name, I found a new rhythm of poetry and started to step into the unknown field of expression.
In addition to the poetry I had been writing, I have expanded my activities to include writing texts for picture books, critiques, and essays, as well as producing programs as a radio personality with a voice, giving me the opportunity to use my voice to bring the appeal of literature and poetry to a wider audience.

The voice transcends time and space, conveying the warmth and breath of the speaker in a very real way.
I was reminded once again that the power of the unvoiced voice, cultivated through this project, transcends national, racial, and all other boundaries, and spreads as a solid reins connecting people to each other. 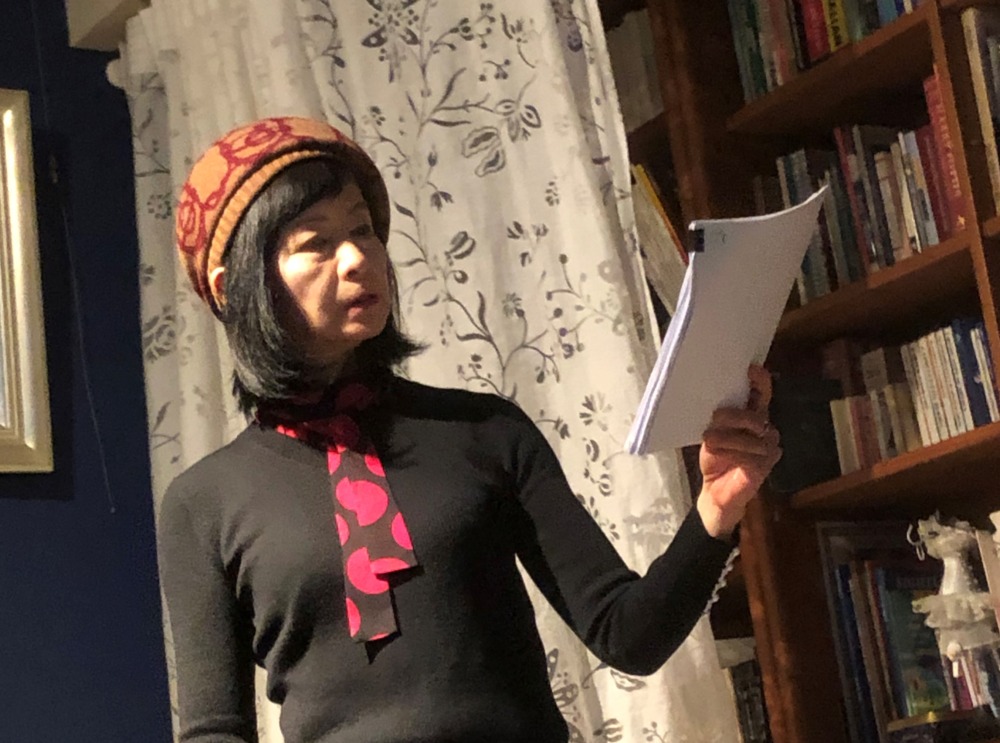 The human voice is truly a wonder. The voice is intimately connected to memory, and unconsciously supports our lives. The gentleness of a lullaby poured from a mother’s lips, the quirks of a loved one who lived, and the many thoughts spoken. When my name is called and I answer, I feel the joy of being understood. Gathering one’s heart to the existence of the voice is a way to release the physicality that tends to depend on digital devices for communication, and to communicate with one’s heart and mind in the form of one’s pure self.
I believe that regaining the primal sensitivity that was originally in our body is one way to make the life of human beings more fulfilling.
Since ancient times, poets have sensed the world of poetry in the wind, light, and the shifting of all things, and have translated these intangible sounds into words.
In the beginning there was the voice. The sound of poetry emanated from the lips, from the body. The poet’s voice can be said to be an attempt to explore the original form of poetry by releasing into the sky the words that were inscribed and sealed in books with the birth of writing.

Since its inception in 2006, the poet’s voice and the project have continued to take place in the midst of the great shaking of the times.
On March 11, 2011, in the wake of the Great East Japan Earthquake, with the anger of the earth at our feet, our words became a single prayer, a pillar of voice that vertically pierced the Japanese archipelago.
What is the power of poetry, the power of words, to transcend the ages? What does language arts mean to human existence? The place of the voice continues to evolve and develop with never-ending questions. 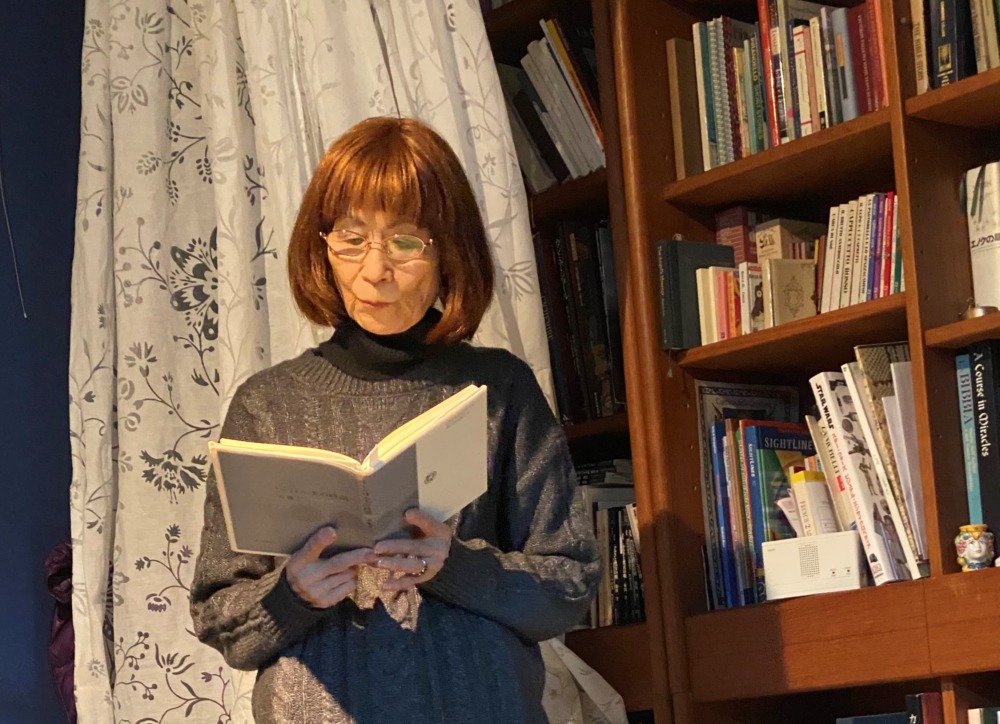 At present, in the face of the unprecedented events of the pandemic, all venues of expression and the nature of human existence are at a crossroads.
However, at this moment, we are breathing. To “speak” as a human being is to be alive. As a sure sign of this, each attempt of the project is secretly strengthening the power of the Japanese language and revitalizing the magnetic field of Japan.
Every day, our lips are covered with a white mask, and many filters and walls block our physical communication.
However, as long as humanity continues to exist, we will continue to breathe, and the poets who inscribe words in time and space will never stop the beat of their voices.

For human beings, language is the very power of life. And the voice is full of infinite possibilities. The art performance Projet La Voix des Poètes (Poets’ Unamplified) is a “unamplified path” that begins on a small island in Japan.
The unvoiced horizon that conveys the solid power of human speech is sure to expand our horizons beyond the confusion of our times. The project will spread its dynamic wings and spread its wings to new sites of sharing, where nothing separates people from each other.
Toward that unseen horizon, I will simply release my voice and watch for the power of the poems and voices of the poets, for the visions that will renew the world, for the brilliant light that will shine at the end of the road.