Human society is a grand mosaic.

On July 22, an airplane took off from Haneda Airport in the middle of the night and flew endlessly across the Sea of Japan and over the Siberian continent. The jet blackness stretched out below us and the stars above us filled the sky. I couldn’t see anything, but when I reached an altitude of 10,000 meters, the hustle and bustle of the city and matters of everyday life became a distant presence, and I was immersed in a solemn mood. For a few moments, I enjoyed this moment of pure bliss.

According to the latest population statistics, the world’s population is 7.7 billion. Every day, there are 7.7 billion different news stories with different events. The media picks up some issues from the mosaic of 7.7 billion, magnifies them enormously, and incessantly relays the processed news. But if you look around the globe, you see politicians, rich people, celebrities, villains… and a lot of people living their lives in comfort. It’s just a mosaic of 7.7 billion scattered across the globe.

The EU-Japan Fest supports almost 800 programs in a year. This includes not only this year’s European Capital of Culture, but also ongoing activities in 46 previous cities and preparatory activities led by future host cities up to 2024. It is the enthusiasm and sense of ownership of the artists and organizers that makes it possible for these activities to be implemented well. Our role is only backward support. Nevertheless, we cannot fail to meet the people involved in these 800 programs and to listen to their thoughts and ideas. That’s why I spend my days traveling around Europe all year round, meeting with artists and other people involved in the program. Last year I spent 112 days in Europe by visiting several cities on a single trip. In each city, I have a busy schedule of meetings and visits to programs from morning to night. However, this time, some countries had restrictions on entry to the country and the number of countries that I could visit was limited. Therefore, I could only visit two countries: Croatia and Serbia, where the event will be held next year. As a result, I was able to stay in Rijeka for nine days and was blessed with plenty of free time. Thanks to this, we were able to see Rijeka from the perspective of its citizens, enjoy slow conversations with the locals, and experience many things. 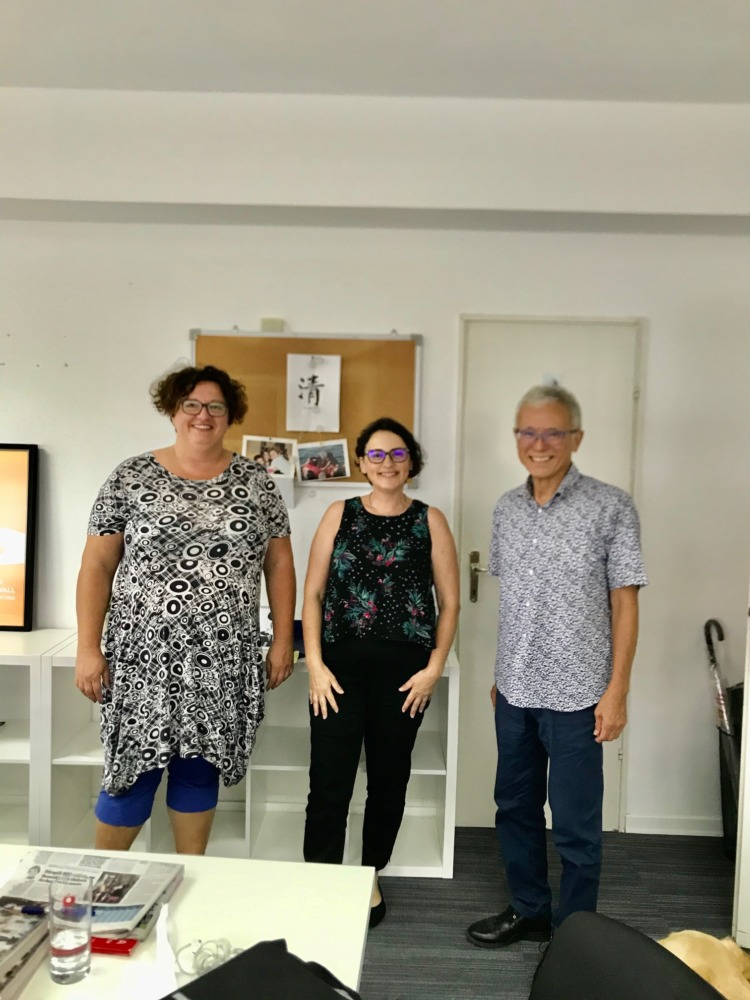 At the Secretariat of the European Capital of Culture, Jasminka is in the middle. On the left is Emina.

After our meeting at the Rijeka 2020’s office, we were relieved when Jasminka, a staff member, offered us a cup of coffee. I had been talking to her over the past few months via zoom, but when I met her in person she had a lot to say that I couldn’t hear remotely. Eventually, with a twinkle in her eye, she began to tell me about a Japanese woman. They met in the fall of 1998. Jasminka was working at a bookstore in Rijeka. It had been raining since the morning, and the streets were deserted. Inside the store, there was a petite young woman of Asian descent, eagerly holding a book in her hand. When Jasminnka approached her, she told her that she was from Japan. As they were in the same age group, they immediately struck up a conversation. She was fascinated by Wim Benders’ film “Wings of Desire” and visited Berlin and then Croatia. The reason for her visit was the Croatian team that had played so well in that year’s World Cup soccer tournament in France. Croatia left the Yugoslav Federation in 1991, and like Japan, they made their first appearance in France. She was one of the fans attracted by Šuker, who became a hero. This encounter led to exchanges of letters between the two, and today they continue to communicate on Facebook. The Japanese woman is the curator of Art Brut. She told me that she was looking forward to the opportunity to reconnect with the European Capital of Culture.

The second story is from the Continental Hotel, where I stayed for seven nights. To prevent infection, breakfast was to be ordered on request. I’m a big eater, so here’s my usual menu: apple juice, vegetable salad, yogurt, honey toast, two eggs fried and bacon, and a café au lait. On the morning of the second day, the staff at the hotel remembered all my requests from the day before. Her mask was hiding her face, but I could easily tell that she was treating me with a big smile on her face. On the morning of the third day, she showed me the screen of her phone. It was a picture of young people from Kawasaki, Rijeka’s sister city, with whom she had been in contact for about half a century. In February, just before the spread of the coronavirus, they had participated in Rijeka’s annual carnival and had danced the night away. The young people who stayed at this hotel had developed a great deal of interaction with the locals, and they left with fond memories of their visit and said, “We’ll be back. They returned home with fond memories of their stay, saying, “We’ll come back again.” 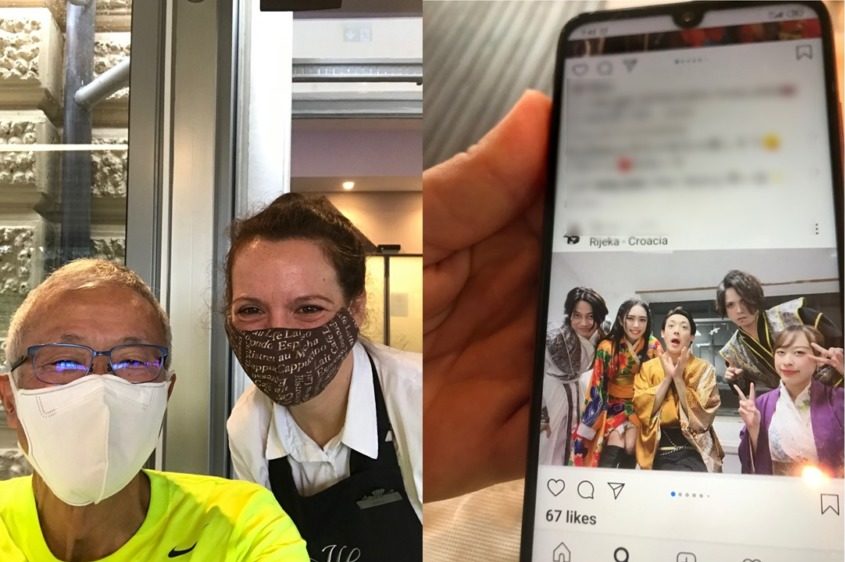 The third is not a story about a human. Even though I had only been in Rijeka for a few days, I was suffering from slight homesickness. In fact, I was missing my dog that I had left behind in my home. One morning after breakfast I was sitting on the terrace of my hotel down the street, watching people go by, when a young man and a small dog caught my eye coming from a distance. The dog seemed to feel my eyes on him, so he pulled his master to me. It was a Shiba Inu. I showed the puzzled young man a picture of my Shiba Inu on my phone. He smiled at me and watched as the dog happily licked my face. He was a 1.5 year old female Shiba Inu from Kennel in Zagreb, he told me. She had been given a name before she came to Rijeka. His name was Michiko. I couldn’t help but to say, “What a noble name. It’s the same name as the Empress of Japan”. He nodded happily. And ‘Michiko’, who kept wagging her tail beside me, was looking up at her master’s face with a vague sense of pride. 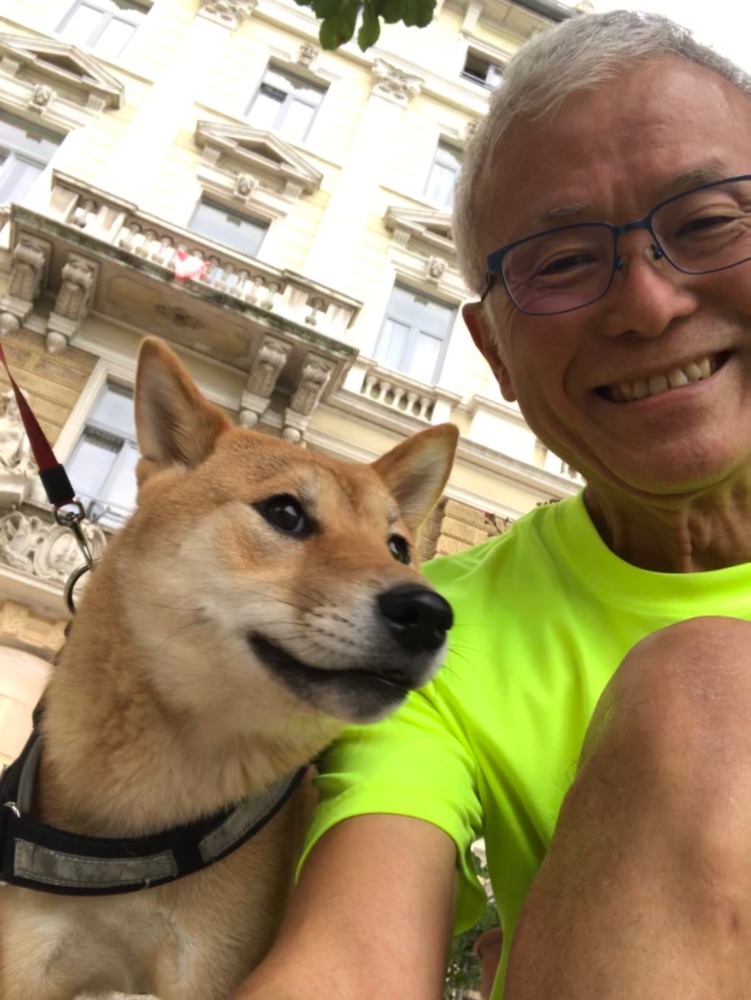