What does it mean to be united with the neighborhoods and in solidarity with the world?

In the aftermath of the coronavirus outbreak, Croatia was undergoing one of the most severe city blockades in Europe. But the more severe the ordeal, the more resilient people become. A local musician, Iva Mosibob, had this to say about the Coronavirus outbreak: “Rijeka’s artists are stubborn. They don’t let anything get in their way”, and continued that artists were inspired in difficult times”.

As I mentioned several times before, during the lockdown, the European Capital of Culture connected the world online. As a result, citizens and local artists easily slipped through various physical limitations, gathering wisdom beyond borders, engaging in dialogue and delving into the content of their programs. There is no doubt that the accumulation of knowledge gained during this period will be utilized after the convergence of the pandemic.

In Rijeka, it has become difficult to hold large-scale events in which artists from around the world participate. For this reason, smaller programs, especially those involving Rijeka and the neighboring municipalities, have attracted more attention and increased their presence. One of them was a program on the small island of Cres in the Adriatic Sea. Five years ago, when Rijeka won the title of European Capital of Culture, it launched the 27 Neighborhood Program, a program of cooperation with the neighboring communities. On the island of Cres, with a population of 3,100, discussions by the islanders also began. After much deliberation, the islanders came to the conclusion: “Let’s build a bridge to the harbor on the island of Cres”. 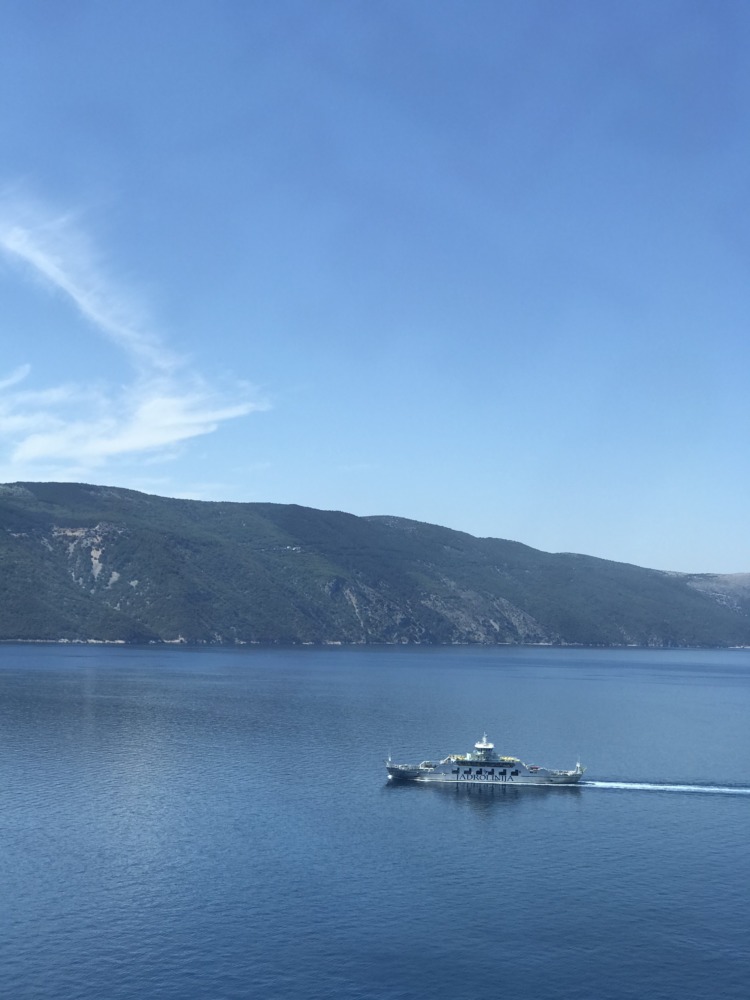 Heading to the island of Cres by boat

The Dalmatia region surrounding the island changed its rulers over the course of 2000 years, starting with the Roman Empire, followed by the Republic of Venice, the Kingdom of Hungary, Napoleon, and the Austrian Empire. After the Second World War, it became Yugoslavia, and since 1991, it has been the Republic of Croatia.

During our stay in Rijeka, the team from the European Capital of Culture took me to the island of Cres. We drove south for about an hour from Rijeka city and then, took a ferry to the island. On the island, Inge, a curator of a local museum and the organizer of the program, and all the other people involved in the program were waiting for us. They greeted me with a warm smile and said, “Thank you for coming in the midst of a pandemic. I wandered through the narrow corridors of the old town of Cres, taking in the architecture of each era that dominated the region. The city itself was a small museum in itself, a perfect blend of different cultures. Eventually, we reach the harbor. The Adriatic Sea stretched out in front of us, and the midsummer sun was pouring down unsparingly. The harbor is well-developed along the inlet, and the two banks are crammed with yachts moored on either side of the harbor. 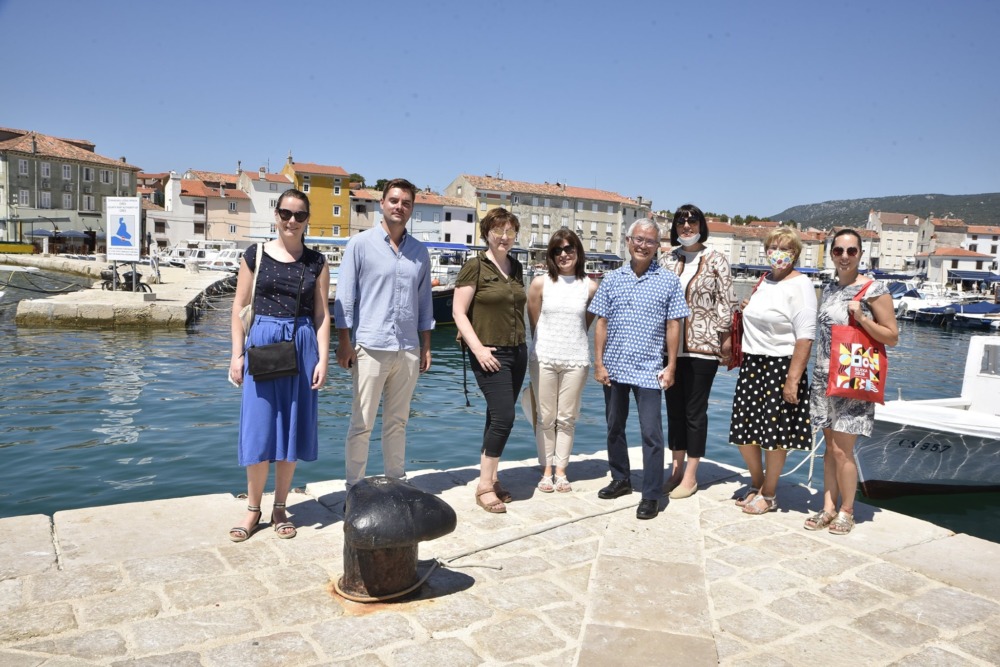 Rijeka 2020 and the people of Cres Island who were showing me around.
Second from left is Deputy Mayor Mr. Marin and third from right is curator Inge.

The conclusion they came to was to build a bridge connecting the right and left banks of the harbor. They wanted to build an ultramodern bridge that would be in harmony with the deeply historic landscape. Inge and his team used the Internet to search for information on all kinds of architects. As a result, they found several Japanese architects who were internationally active and had a track record of success. What was surprising was their ability to take action. They contacted the chosen architects directly and came to Japan for consultation. During their stay in Japan, they met with several architects and brought the information back to the island, and finally, the islanders voted to select Mr. Tetsuo Kondo, an up-and-coming architect for the project. 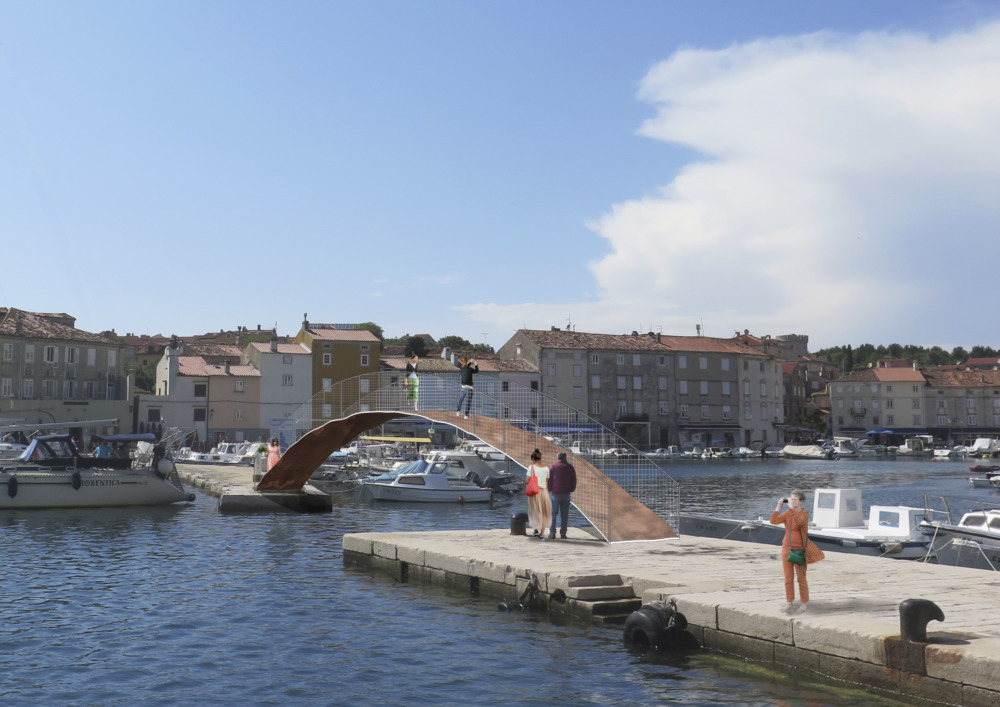 In fact, Mr. Kondo was invited to previous European Capitals of Culture. The most memorable one was an architectural project in Tallinn, Estonia, the European Capital of Culture in 2011. He visited the site many times and listened to the stories of local citizens. What he found was the negative sentiment of the citizens towards the forest: in 1991, Estonia regained its independence after half a century of occupation from the Soviet Union. For a long time, Estonia’s deep forests were implicated by rebel guerrillas known as the Forrest Brothers, and naturally, the Soviet army was on high alert. Any civilians entering the forest led to being shot to death. Because of this history, even in 2011, twenty years after re-independence, when freedom was attained, citizens were still afraid to enter the forest.

Mr. Kondo was able to align himself with those public sentiments. He built a corridor connecting a number of large trees in a forest near Tallinn. Day after day, many citizens lined up in long lines to enjoy a walk along this corridor. They felt the sensation of being able to roam freely in the forest. This achievement must have touched the hearts of the islanders on the island of Cres. Mr. Kondo’s design was completed. The construction has been postponed due to the pandemic, but I look forward to the day in the near future when the monument will appear as a brilliant landmark in the history of the island of Cres. 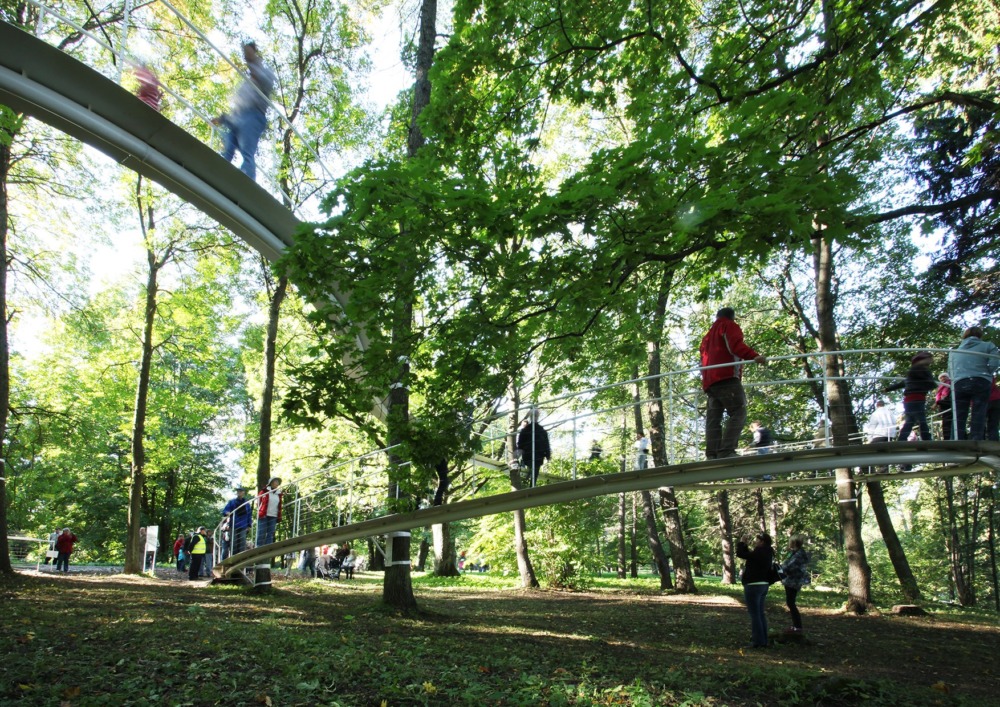 “A Path in the Forest” in Tallinn /©Testuo Kondo Architects

I felt the fundamental power of the European Capital of Culture in seeing such an innovative initiative being developed on a remote island, which is said to be underpopulated in Japan. In today’s world, the local and the global are two sides of the same coin. This program brilliantly proves that where there is enthusiasm on the part of those involved, there are no regional differences in arts and culture.