Surprisingly, my boarding on a return flight was refused.

From Novi Sad, we drove through the open countryside to Belgrade Airport. It was a very pleasant drive. During the hour and a half journey, I enjoyed conversations with Đorđe, a driver of Novi Sad 2021. He proudly told me “This summer, it was difficult to travel outside the country. However, with the rise in popularity of travel within the country, I was reminded of the beauty of Serbia”. I had a lot more fun and learned more about the country’s history and life, not only in official meetings but also in private conversations. I’ve been having such conversations during my visits to Serbia for the past five years, and I’ve become a fan of the country. Eventually, we arrived at the airport. I said goodbye to him here, and I was filled with gratitude.

I rolled my suitcase and went to the Austrian Airline’s counter. My flight was supposed to be from Belgrade to Frankfurt via Vienna, with a connection to Haneda. When I presented my e-ticket and passport at the counter, the staff’s face clouded over by seeing my documents. She began to exchange pleas for help with a man who looked like a manager who was waiting in the back. He shook his head from side to side. I shouldn’t have been doing anything wrong, but I had a bad feeling. Eventually, she said to me with a thoughtful look on her face, “Your reservation suggests flying from Belgrade, which is outside the EU, to Vienna and Frankfurt in the Schengen countries of the EU. However, only one city can connect within the Schengen zone on the same day. This is a notification from the EU. Therefore, you should fly directly from Belgrade to Frankfurt, but unfortunately, there are no flights to Frankfurt today. I immediately reacted to the unexpected situation: “Austrian Airlines has been informed by the EU that there are no flights from Belgrade to Frankfurt today. Why did Austrian Airlines accept a reservation that was not flyable when they had been notified?” I was not convinced. The Mr. Manager shrugged his head and said, “We are check-in personnel, not Austrian Airlines staff”. I said, “I would like to speak to the Austrian Airlines manager then”. I retorted. But the person in charge who appeared a few moments later did the same thing. 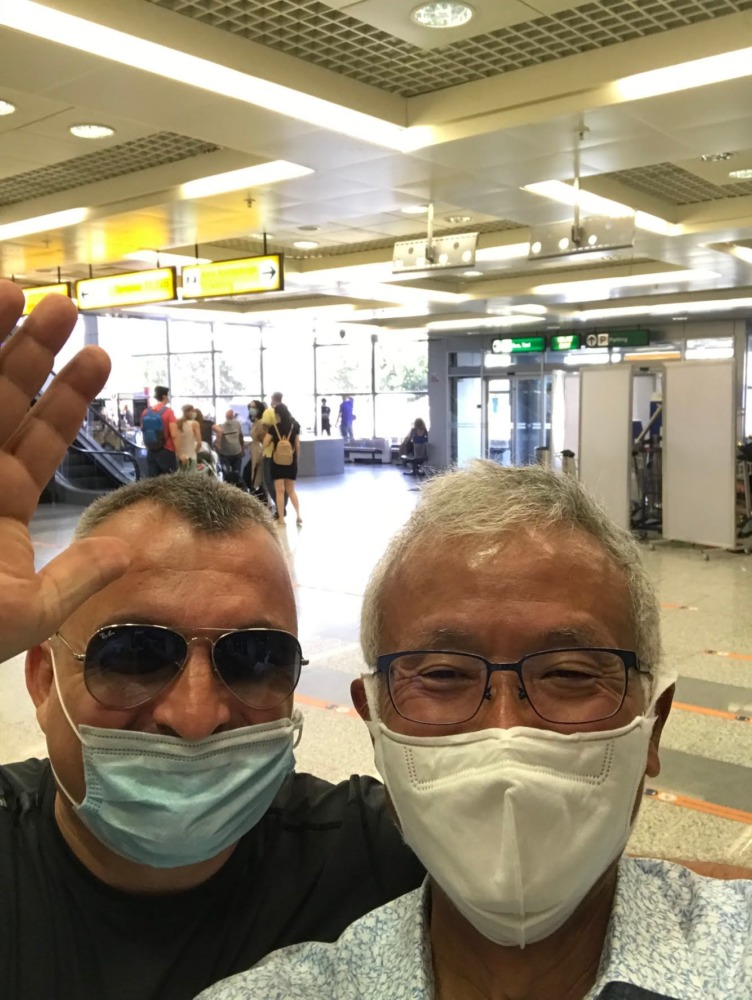 Đorđe, who drove me to Belgrade airport. I didn’t know what would happen then…

The situation was even more serious: “We can’t change your reservation here. You must make the change at the Japanese travel agency that issued your ticket”. Their response was unflattering. It was already 9 pm in Japan and I called Tokyo immediately, but the agency was already closed. The only way to be sure was to contact Japan tomorrow morning and ask for a new flight to be rescheduled. I contacted Vladimir of Novi Sad 2021 and he immediately secured me a hotel in Belgrade.

The Schengen Agreement mentioned above, is an agreement that allows European countries to cross the border without inspection, and Norway and Switzerland are also part of the agreement, but not Serbia. Moreover, at this point in time, Serbia was on the list of countries at risk of coronavirus infection. It was possible for European countries to enter Serbia, but it was not possible to enter European countries from Serbia. Isn’t it a good thing that we don’t enter the country by transit? What kind of logic is good for one country to pass, but not two? I was frustrated by many inexplicable matters, but I decided to consider this as an opportunity for an unscheduled stay in Belgrade that God had given me and headed to the hotel.

At that time, Japan was hit by a second wave of the disease, which exceeded the first wave in April and May. The number of deaths was among the lowest in the world, but the real threat was not the virus itself but the psychological impact. The number of suicides in Japan in August had skyrocketed to a much higher level than the number of corona-related deaths. I wanted to return to Japan as soon as possible because I wanted to share what I had seen and experienced during my two weeks on the ground in Europe with Japanese people, artists and children. I thought of the youth brass band from Higashikawa-town in Hokkaido, who were scheduled to visit Ireland with the executive committee chairman Mr. Kunibe this year. When I visited the town in June, I heard the words of a junior high school student “We’re really looking forward to our performance and homestay in Ireland”. For them, their “dream” has become a concrete “goal”. I keenly felt that it is our responsibility as adults to make their dreams come true at any cost. The global pandemic calls for human solidarity and action beyond national borders. During my stay in Belgrade, I kept in touch with my colleagues in Tokyo and planned a solid schedule after my return to Japan.

The next one would be uploaded on 16 October.