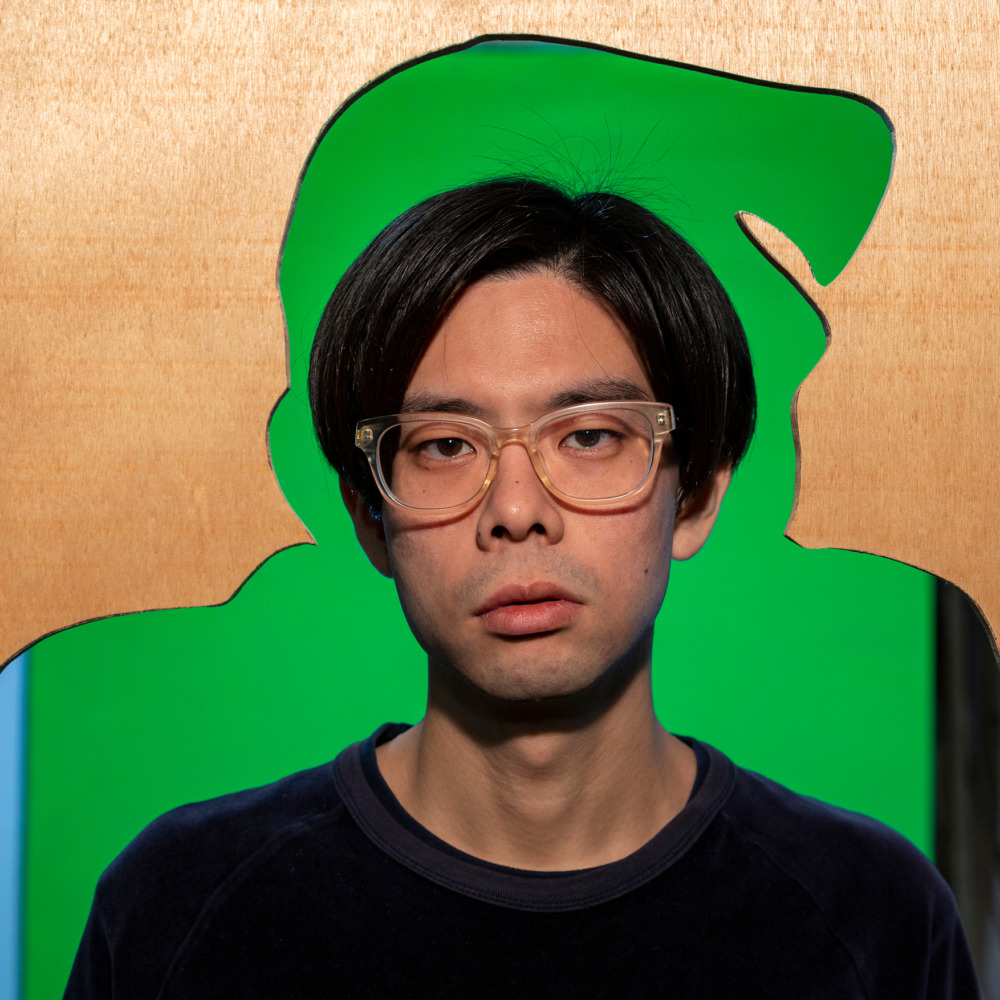 This year was one in which my art practice grew in leaps and bounds.

In January, I presented a comprehensive installation combining narrative, video, objects and performance as part of the solo exhibition “Second Texture” at Gallery TOH, which recently opened in Yoyogi, Tokyo. Inspired by manga artist Daijiro Moroboshi’s Kao Kao sama ga toru (Kao Kao sama passes), it depicted the scenery in our minds as we confront the pandemic by presenting together surface layers of our urban landscape (various advertisement-like images and painterly images) and our own surface layers, or kao (faces), as people living today.

I experimented with various things at this exhibition. First, I created a narrative that runs through its core, which was sold as a short story at the venue. I also introduced performance. At the opening reception on the first day, I staged a performance that involved getting a tattoo on my own back. 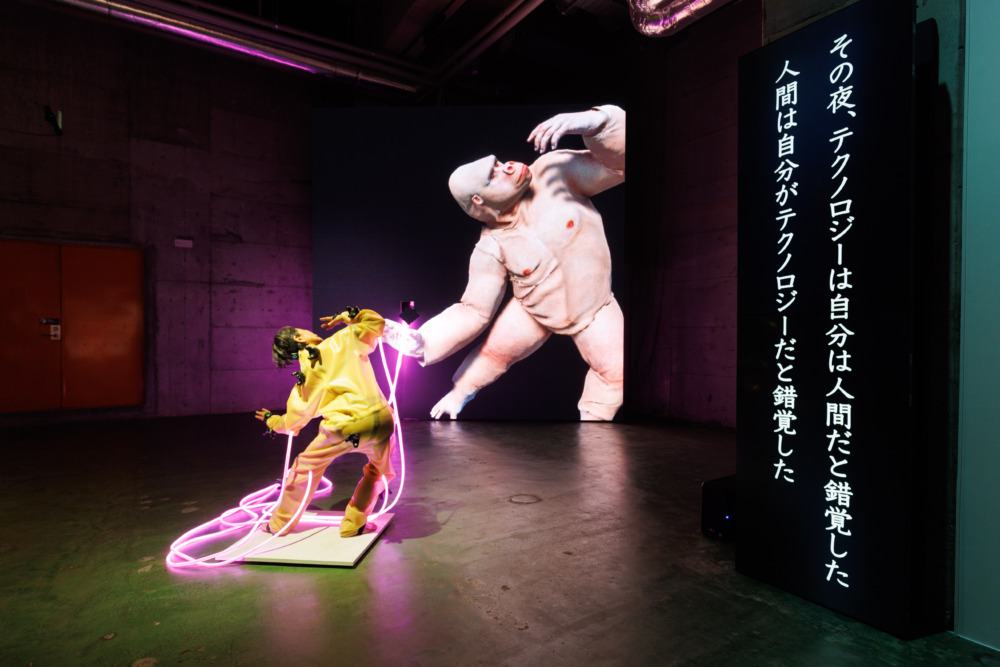 These actions and the narrative appealed to viewers’ emotions while leaving a somehow uncanny impression, contributing to the success of the exhibition.

In the summer I participated in “Ripple Across the Water 2021” organized by the Watari Museum of Contemporary Art, presenting We can’t help feeling it close where we soak up the sun.

Over the last year, searching for my own middle ground has become a theme of my work. In this I was greatly influenced by philosopher Koichiro Kokubun’s Chudotai no sekai (The world of the middle voice).

We are not “pure” entities, but “impure” entities in the sense that all of us must rely on others to live. I remember the impact the words to this effect written in the book had on me. Certainly, we do not make every decision on our own, and all manner of activities can only occur in the context of relationships with others. It was as a result of having ideas such as this ever present in my mind that I created We can’t help feeling it close where we soak up the sun. 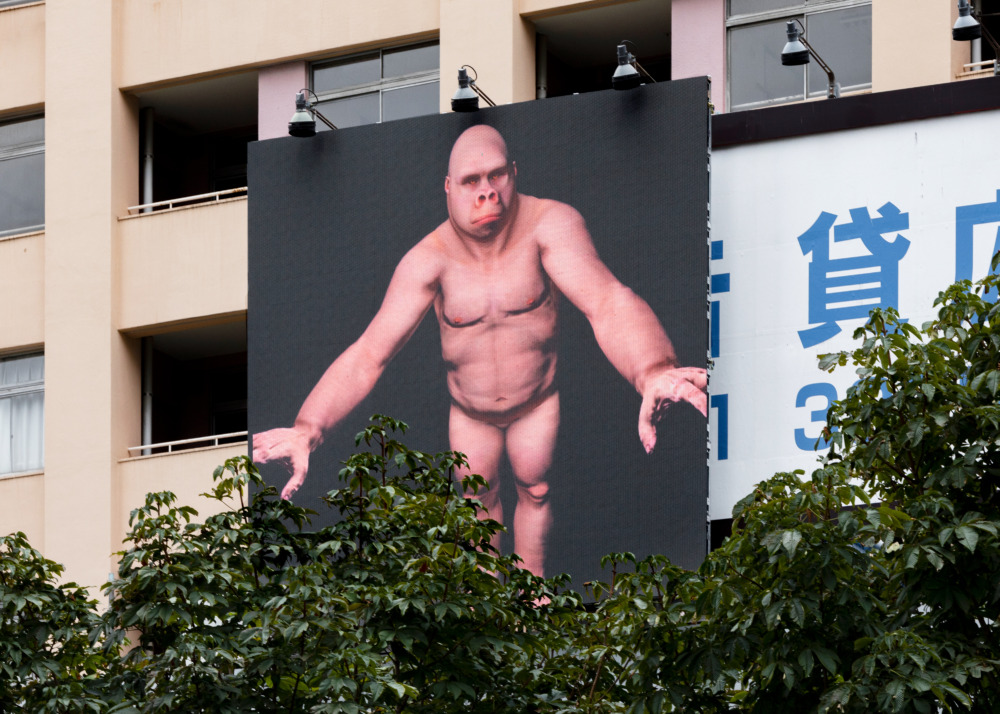 A person dressed up as a gorilla… A gorilla whose fur has fallen out… These and other words could be used to describe the uncanny figure I revealed in a prime location in Aoyama. My intention was to pose to the people living in cities today – whose exposure to advertising has left them only able to think of things passively – the question, “Isn’t this how you appear?” In the video, the gorilla is wearing its own skin, which stretches like rubber and clings to its body. It then takes it off in a seductive manner as if performing a strip show. To present this exhibit, my first outdoor video work, I installed a billboard display, forcing my way in on the sly among the advertising on Aoyama Avenue.

The result caused bewilderment in a range of senses among the various people on the street, with some delighted at the sudden appearance of the strange gorilla, others pretending not to have seen it and walking past at the same speed as usual, and others still walking off with perplexed looks as if wondering whether it was art or simply a prank. However, this was what the curator, Koichi Watari, had expected. Something he always said during discussions in the lead up to the exhibition was that cities are becoming increasingly boring. His face when he declared at our very first meeting that he was a gang of one intent on disturbing the order of Aoyama was full of delight. Honoring this gutsiness, We can’t help feeling it close where we soak up the sun turned into the largest work I had ever created. Because the neighborhood itself became the artwork. 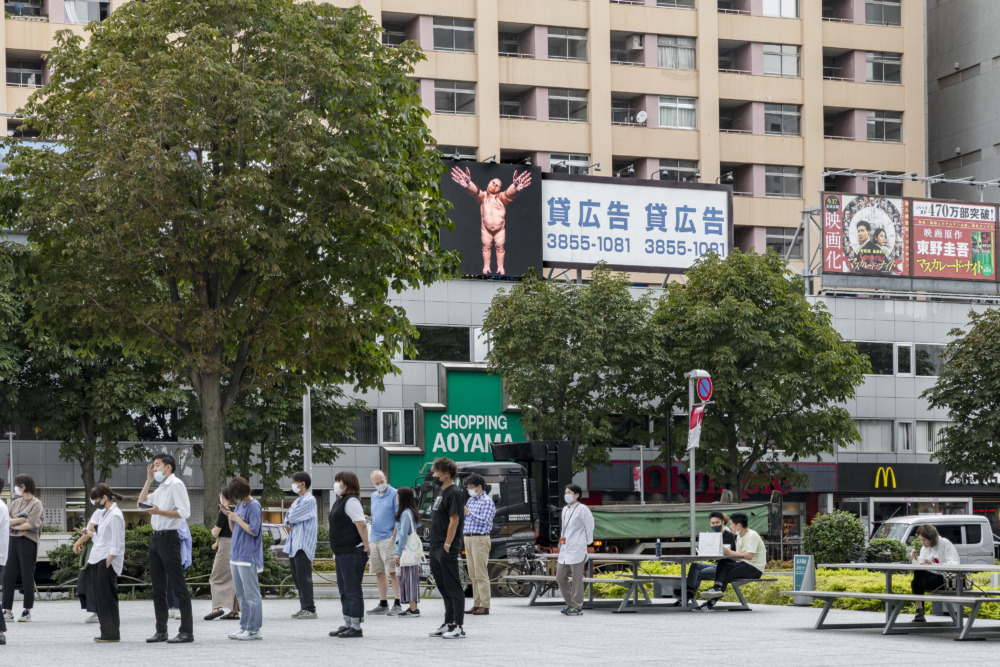 The day before “Ripple Across the Water 2021” opened I received a phone call informing me that I had been selected as a Terrada Art Award 2021 finalist. There were four other finalists, all around the same age as me, and we were all invited to take part in a show at an exhibition space owned by Warehouse Terrada. At this point we each received a prize of three million yen, which was to fund the creation of an artwork. I had submitted a plan that involved refining as a performance piece the gorilla video I presented at “Ripple Across the Water 2021,” on the basis of which I had been chosen as a finalist. “Ripple Across the Water 2021” ended on September 5, but as I was unable to begin work immediately, in essence I only had around two months to finish the piece for the Terrada Art Award 2021 Finalists Exhibition. At this point, I want to state that Maihime, the work I showed at this exhibition, could be called the crowning achievement of my career to date. There was a corresponding response from viewers, and it was recognized by myself and others that a masterpiece had been completed. Because at the planning stage Maihime was beyond the scale of my previous works, actually creating it was hard work. There were many mountains I had to cross. I had to honestly confront the question of what I truly wanted to get across. This entailed confronting “love.” I wanted to convey what I was thinking about humans, about technology. I had conceived of the work as akin to making a confession to a large audience. Because it was such a major undertaking, I ended up receiving cooperation from many people. Every day I had meetings, carried out inspections and actually worked on Maihime with professionals in various fields including programming, costume-making, dance and music. Because of the short timeframe, a single decision would have a considerable impact on the quality of the work. This added to the stress, but the process overall helped me grow as an artist. I concentrated on completing the essence of the work while leaving things I didn’t understand to the experts. The Terrada Art Award 2021 was truly the culmination of these efforts. The thing I felt first of all as a result of making this work was that when they see something good, people are truly moved.