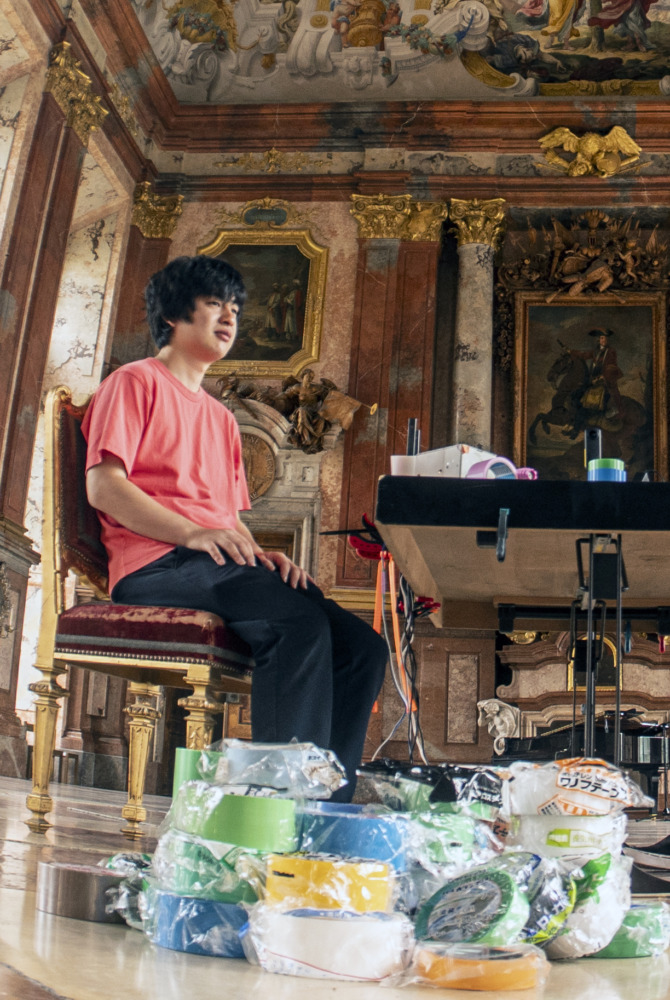 Since 2016, I have been working on a series titled “Counting Appearances,” in which the events that appear in videos are converted into numerical values using a mechanically operated magnetic counter so that real time and the time in the videos are simulatively linked.

In the works that make up the “Counting Appearances” series, the things that are converted into numeral values were initially physical objects, but gradually the subject became the relationship between the actions of human bodies and objects, and in the most recent works the subject is solely the movement of human bodies.

Thus, in the course of making the works, my attention shifted to the movements of bodies in the videos and physical phenomena involving movement.

As an extension of this I started using virtual reality (VR).

I found the sensation of putting on a headset and holding a controller in my hand to manipulate things while becoming immersed in video intriguing, and it was from around the time that I began thinking about this sensation that my latest project commenced.

In January 2021, I started up a VR headset I had bought in around October 2020 and set aside after playing around with it for a short while. I tried various pieces of software (including a range of fitness-orientated games that involved moving one’s body), in the course of which I downloaded and started up a 3D modeling program. 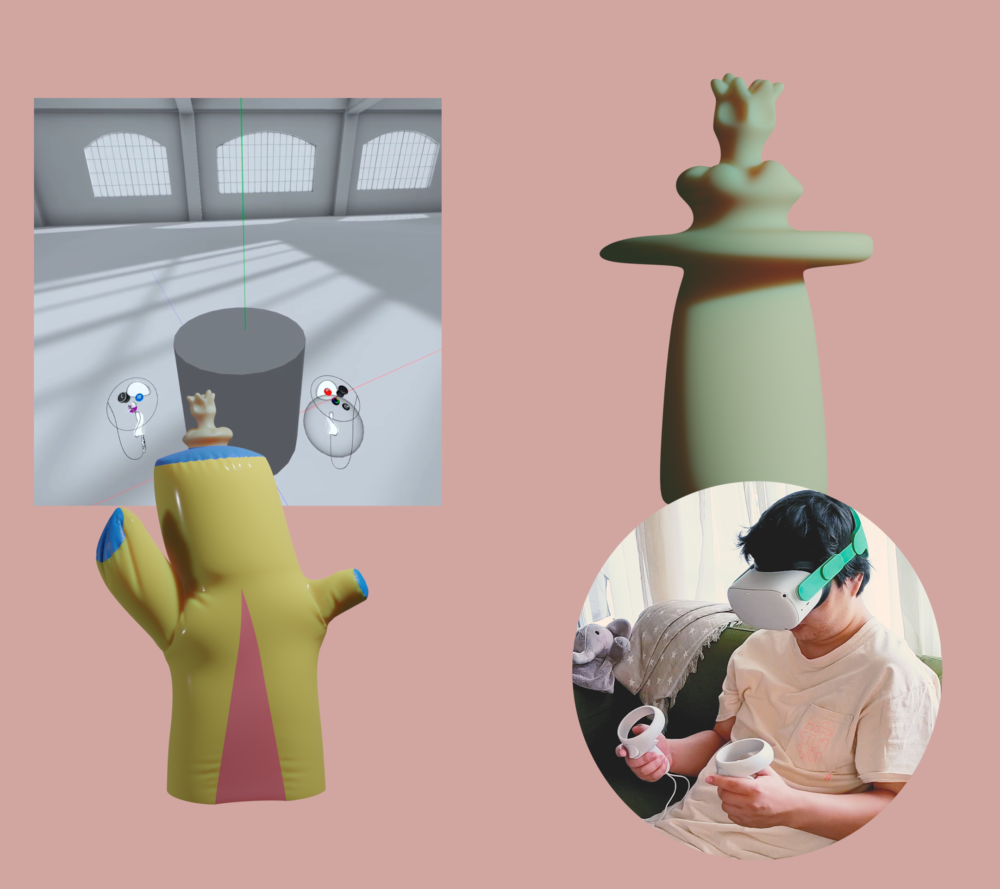 I felt that the sensation of doing 3D modeling with VR was just plain thoroughly interesting.

This was around a year after I moved to Yamaguchi in 2020 in the midst of the Covid-19 pandemic, and also coincided with a period when I was thinking about my approach to making works until then and my approach going forward. I had starting playing around with VR because I just wanted to try something new. To help me explore the sensation I had found so interesting, from the following week onwards I decided to make a habit of completing one model each day using the VR headset.

In the course of doing modeling with VR, though it’s hardly surprising, I discovered that one of the reasons it felt so interesting is that one can perform operations intuitively: objects are manipulated in three-dimensional space by moving one’s face, changing one’s point of view, moving one’s hand and so on. This was clearly different from my experience of using 3D modeling software until then, which involved using a mouse and left me feeling frustrated (precise handling was difficult).

By continuing this every day, my body gradually became accustomed to the headset until wearing it became a kind of habit.

The controller is at once a tool for manipulating virtual space and an extension of my hand.

When I grip the controller and put on the headset, my mind turns to what it is I am manipulating.

Inside the VR headset, my hand is replaced with a hand that grips the controller virtually.

Come to think of it, a mouse is also operated with the hand. The same when one writes using a pencil.

Through a daily routine involving VR, which I began after being influenced in no small way by an interest in the “body,” my interest in the existence of “hands” grew stronger.

As a means of connecting the objects that came into existence every day through the movement of my hands operating things (here, the VR controller) and the movements of my hands themselves, and this was unexpected even to me, I came up with the idea of creating something based on hand puppets.

Because I sensed that they were compatible with the properties of a computer, because there was something interesting about the fact that the body of a hand puppet is the same as the hand manipulating it, and because I liked their form, I added hand puppets to my daily routine.

The way hand puppets move gives the impression that they might be about to speak.

Depending on the movement of the puppets’ bodies (i.e., the hand making them move) and whether or not I could make them speak, perhaps some kind of puppet theater (a story of some kind or a part of one) could result.

These were my thoughts around this time. Another interesting thing about making a hand puppet is that the puppet encloses (hides?) the hand manipulating it, the form of the fabric covering the hand.

With these questions and concerns still in my mind, in August I began experimenting in earnest with making puppets move.

Using a hand motion capture device that records human hand movements, I captured the movements of my hand and transferred the results to a hand on my computer.

Then I attached the head of the hand puppet I was creating.

Next, based on these movements, using software for making clothes on a computer, I made the body (fabric) of the hand puppet. I created the puppets’ movements by simulating the movement of fabric on the computer. 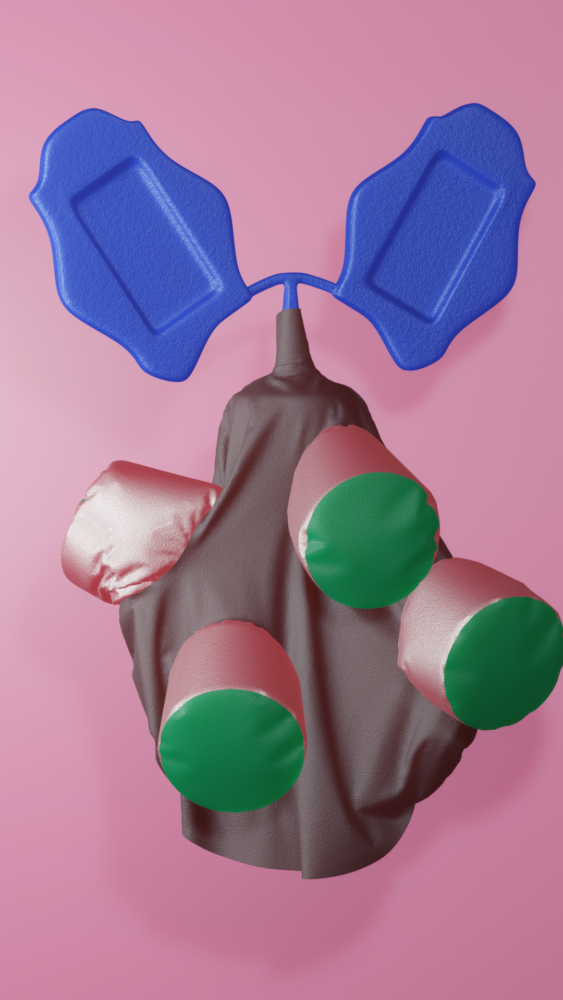 I made this creative activity part of my daily routine to help me move my hand while thinking. 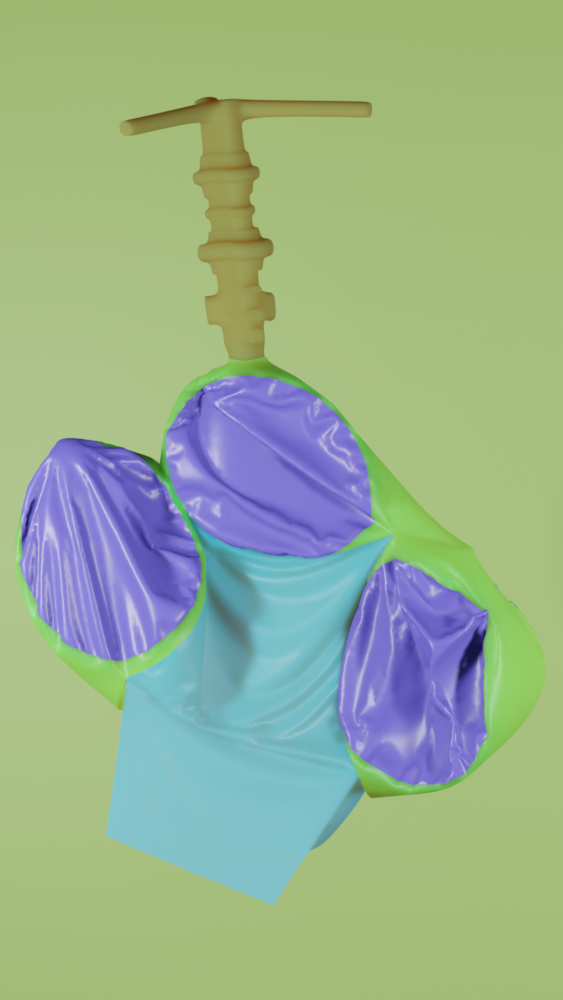 Based on my thinking during this process, as the next step I am currently proceeding with a project that involves inviting people working in CG, artists and dancers as guests and interviewing them about their approach to making works, how they feel about working in VR space and about bodies and hands as we work together on modeling the puppets’ faces using VR. I am undertaking this project for the purposes of research aimed at updating my own practice and approach going forward, and ultimately plan to post images and other details of the project to my website.

Every day is filled with trial and error as I push ahead with this project with the aim of completing my puppet theater-like work in time to present it to the public next year. I also want to conduct research on the history and thinking around hand puppets and puppet theater in Europe and around the world, and on the relationship between the body and clothing.