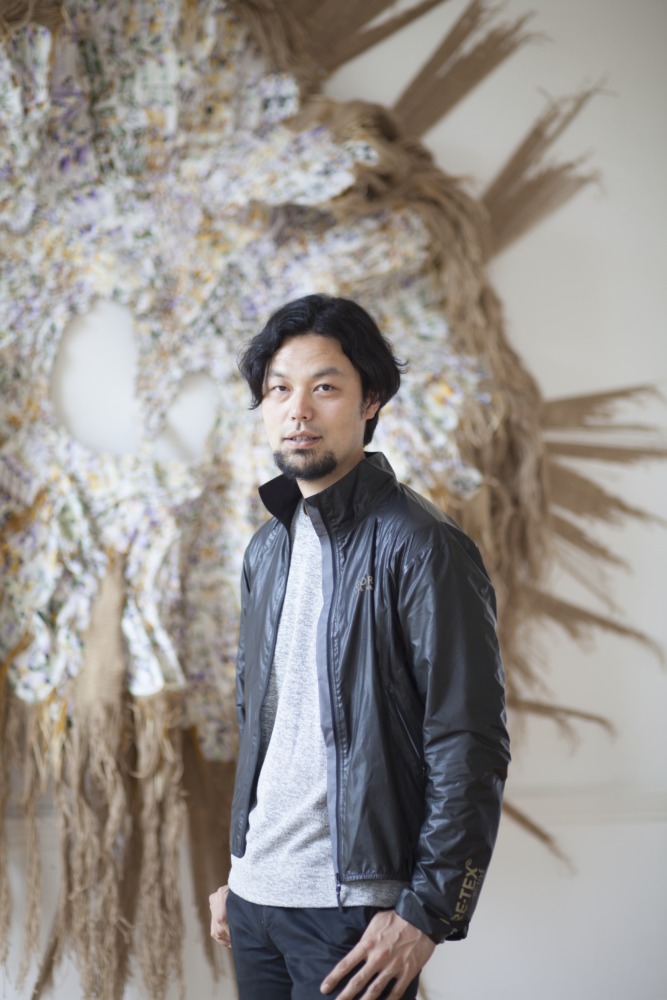 As part of my creative research in the second year of the COVID-19 pandemic, I pursued activities in 2021 around the two axes of individual studio work and artist collective work drawing on neighborhood. Previously I had aimed to express through paintings and drawings the processes and patterns of self-organization, and in 2021 continued and further expanded on this creative research.

First, with regard to my individual studio work, in May I published a study titled For the philosophy of poiesis: poiesis, bricolage, and protein structure (https://www.artresearchonline.com/issue-8e), and based on this way of thinking have created artworks to implement this philosophy of production (poiesis).

Since 2020, the world has experienced the fury of Covid-19, with which AlphaFold, an artificial intelligence program that predicts protein structure and has contributed to virus research, has made rapid advances. In light of this, I started researching the structure of proteins from square one and attempted to simulate these three-dimensional structures using the creative model of my woven paintings (2020, Takuro Someya Contemporary Art). The aim of this was not to recreate the structure of proteins, but to show together the respective higher-order structure of protein – a product of nature – and human production. My basic stance is to treat production (poiesis) as a temporal process.

Poiesis is a bundled sequence of actions separated in the midst of time, harboring accidental properties occasioned by mediators such as language, musical scale, and rhythm, or matter multilayered in function and/or purpose, and a method of art production that views art as a dynamic state. Venturing further into its temporal nature, I would describe poiesis as the self-organization, while amidst time, of discrete moments of time, inserting rifts in time oneself by the arrangement of compositional elements. Incidentally, if we accept such a generalization as to some extent correct, then it is actually possible to identify poiesis not only in art, but in human intellect that is constrained by time and rules, such as in games. This is the realm of the intellect, for example, that sees a player of chess, igo or shogi in the middle game inventing the best move or a new move in response to their opponent’s move, rather than the knowledge or correct answers they would wield in the form of established tactics in the opening, or checkmate tactics in the closing phase of the game. I find this all fascinating, including the present-day mutual infolding into this realm of the intellect of human and computer courtesy of machine learning software. Seen from another perspective, a process like this, that of branching into a range of possibilities while choosing actions, is also built in to painting production. In this year’s studio work I constructed and put into practice a production system that would unpack this process. In the new work titled Painting twins I (2021, The POOL), in order to express the concept of “branching production” I undertook production of two paintings using an identical process, and achieved the said expression of the concept by, whenever the choice between two different brushstrokes arose, using those different brushstrokes in the different paintings. 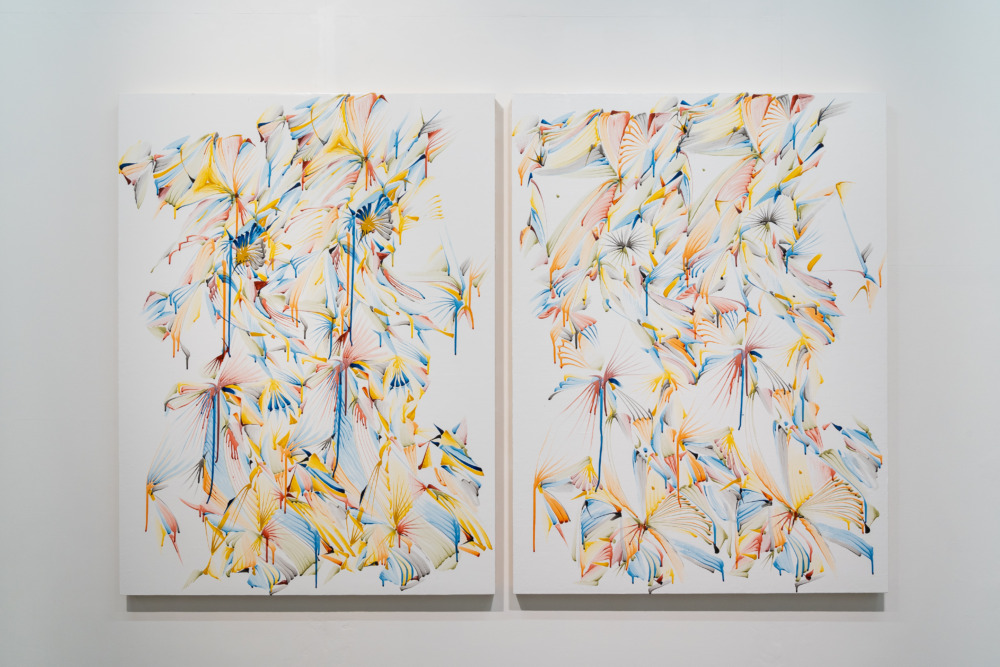 Secondly, the artist collective work drawing on neighborhood. The collective to which I belong, “Pondparnasse” was formed in November 2020 by artists Yusuke Asai, Natsuki Takayama, Erina Matsui, and myself (Goro Murayama), all artists based in the area of Tokyo formerly known as Ikebukuro Montparnasse (Chihayacho, Shiinamachi, Minaminagasaki). Parnassus is a mountain in Greek legend that gives Montparnasse in Paris its name, and is known as the birthplace of poetry, music, and learning. Ikebukuro in Tokyo, meanwhile, traces its name to its original reputation as a boggy area full of springs (ike meaning pond or lake), and the resulting low land prices, combined with convenient transport links, resulted in a proliferation of artist’s studios there from the late Taisho era to around the end of World War II, attracting people from many different backgrounds and forming a distinctive artistic and cultural enclave. “Pondparnasse,” born from a merging of this mountain and lake, was formed with the intent of undertaking neighborhood-based collaborative work, and of stimulating local culture, in ways informed by the legend of Mt. Parnassus and the history and geopolitics of Ikebukuro Montparnasse. The style of production also involves self-organized processes that could be described as social poiesis, and explores possibilities for group work other than the supervised production generally undertaken in movies, anime, manga, and studios with an apprenticeship system. 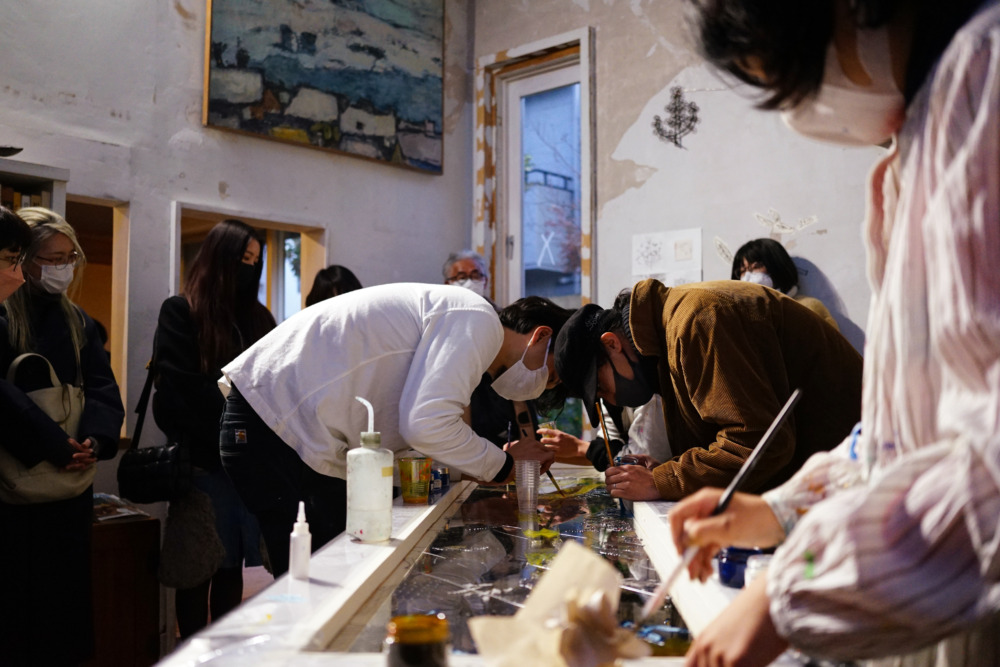 2020’s “Pondparnasse” exhibition attracted considerable acclaim, and in 2021 we were invited to take part in “Rokko Meets Art 2021,” there making work in residence that took as its motif the abandoned Maya Kanko Hotel, a heritage building over 90 years old, for which we received a special sponsor’s prize. In December we also received funding from Arts Council Tokyo and the Agency for Cultural Affairs to stage the “Ikebukuro Montparnasse 2.1 – trace back to the water vein” art project (Ikebukuro, Tokyo). This consisted of exhibitions unfolding at four venues around Ikebukuro: the Turner Gallery (Minaminagasaki), WACCA Ikebukuro (Higashi-Ikebukuro), former Hiroshi Kasukabe atelier (former studio of painter Hiroshi Kasukabe) (Kaname-cho) and Kohonya honkbooks (Nishi-Ikebukuro). The exhibition at Kasukabe’s former studio was of particular note, the studio being a remnant of the Ikebukuro Montparnasse era built over 80 years ago, so the public art-making conducted there gave both visitors and artists a valuable feel for the period. 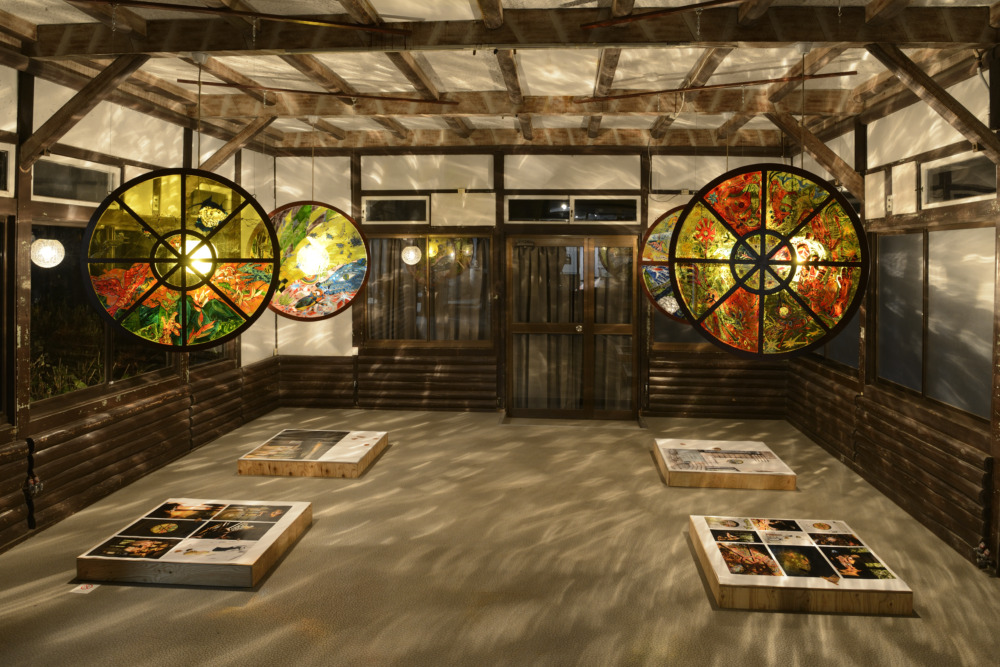 With the pandemic limiting travel further afield, there is a need to stimulate local culture that is within walking distance, rather than accessed by public transport. Activities of this sort are crucial for forging even closer bonds between artists based in this area of art historical significance, and importance in manga expression (eg Tokiwa-so, where the apartments home to Osamu Tezuka, Fujio Fujiko, Shotaro Ishinomori, Fujio Akatsuka were located). Ultimately, “Pondparnasse” aims to revive local culture, reconsider the history of local culture, and at the same time make the “Ikebukuro Montparnasse” area a more vibrant, enriching place to live. Encouraging the development of neighborhood culture during the pandemic is certainly our most important activity at present.