HOME > Column > Overcoming the Distance: Testing the Power of Presence

[Vol.79] Overcoming the Distance: Testing the Power of Presence

“Test exposure”, a historical notion from the area of image registration techniques was chosen as a title of the 16th Media Art Biennale WRO 2015 due to its manifold meanings pointing at the need of experimental approach within the broad field of contemporary art. It also reminds of the art’s ability to shed light on ideas and phenomena by using certain parameters.

As the Canadian experimental filmmaker and the WRO 2015 participant Mariella Nitoslawska noticed: “[…] there’s no such thing as “correct exposure’ any more than there is a correct ways of seeing. How to expose means what to expose.”

The objective parameters of a “correct” exposure are rather obvious in regard to photography and image-oriented time-based arts: one needs certain amount of light and time, the objects exposed need to be in a certain distance to the technological machine used within this process. But what do we need to prepare an appropriate exposure, a meaningful display of contemporary art practices in their contemporary variety of approaches, forms and techniques? What kind of tools and mechanisms are needed to arrange an exhibition space, enabling to freely resonate various ideas and concepts? How to validate and question conventions of presenting the artworks, reaching the audiences, testing the format of the exhibition as a communication space between artists, their works, exhibition makers and the viewers?

Presence seems to be a crucial factor when building up communication spaces in form of contemporary art displays. According to the Merriam-Webster dictionary, the word presence means the fact of being in a particular place, the state of being present, as well as the the area that is close to someone. Presence is needed to overcome spatial remotness and avoid a state in which people are not involved with each other. In other words, we need to be present, on site to build a relation of mutual involvement. 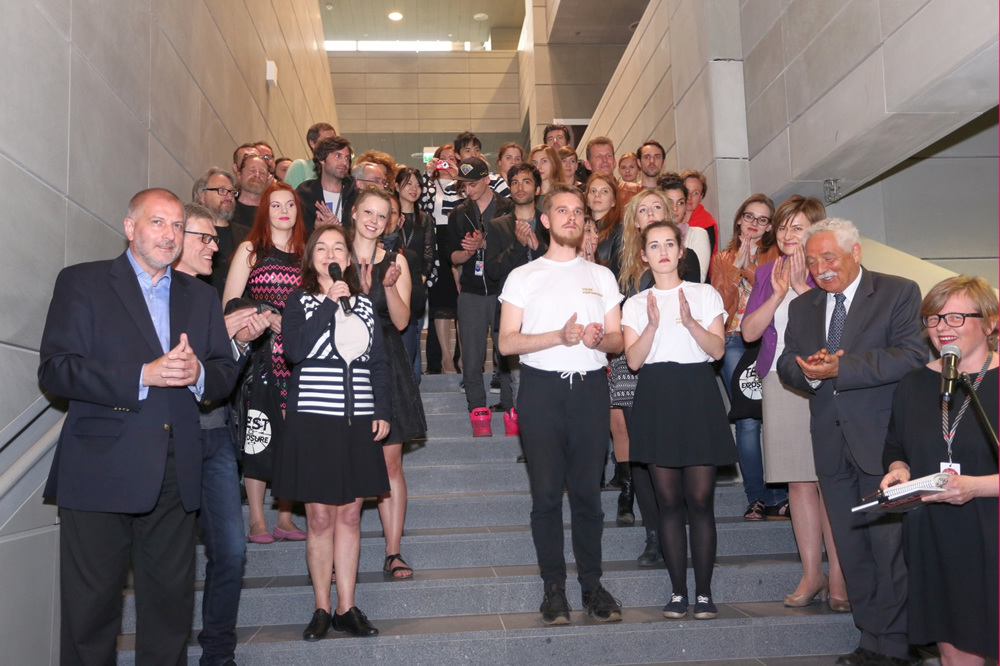 With the communication media we’re obviously able to effecttively fight distances, we practice telepresence in many different ways (the idea of telepresence has been an infuential topic for media art), we work remotely, even if not speaking the same language. But the actual physical presence of people involved changes profoundly the level of mutual understanding and quality of actions carried out.

These were my thoughts while working with Japanese artists on their presentations within WRO 2015 Media Art Biennale. Although we could very well elaborate their presentations working remotly, it was their actual presence in the particular place, their state of being present with others, within the area that is close to this international community gathered together around this very event in Wrocław gave strong added value to their works.

It was great to meet again some of the artists and curators that I had met in Tokyo earlier this year -Katsuki Nogami, the young artist awarded in 2015 the Campus Genius Award had submitted two of his performances to the open call for WRO 2015. We met each other in Tokyo and this encounter resulted in a better understanding of his artistic practice and, finally, in accepting his proposals. 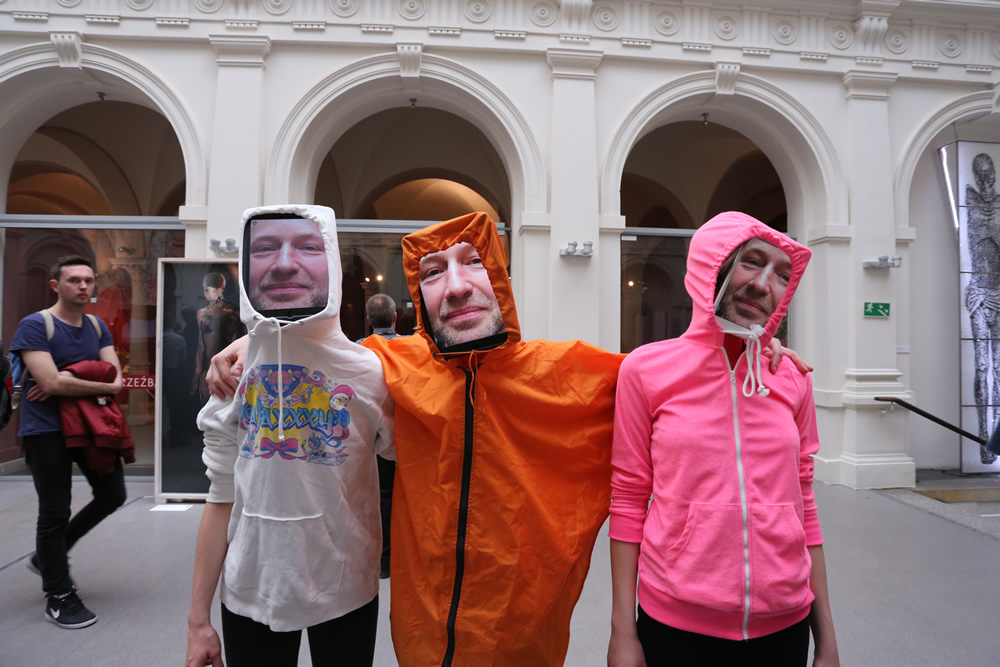 He was probably one of the best recognized artists during the WRO 2015 Biennale, his participatory performance YamadaTaroProject was carried out in public spaces with the citizens of Wrocław and the festival audience. During a few days the artist cooperated with a group of volunteers, among whom were also the students of Art Mediation Department of the Eugeniusz Geppert Academy of Art and Design in Wrocław. Despite the obstacles in their verbal communication in foreign languages, they splendidly worked together, communicating with each other and with the people of Wrocław on a higher, non-verbal level within a space of mutual understanding. It was a joyfull action dealing with serious issues, such as privacy and exploitation of human relations in social networks operated by commercial entities. His second performance, Rekion-Crepitation diverted the direction of audience’s focus: it introduced the idea of artist’s inner body as a sound instrument. Thanks to special microphones, supersonic wave speaker and special software we could hear the normally non-audible inner creak sounds created by movements of the bones in the artist’s cervical spine. The sound was audible due to the supersonic wave speaker attached to a robotic arm, the movements of which were synchronized with the head movements of the performer. A live broadcasting from the inside of the artist’s body created a noisy sound performance that captured the attention of the audience.

The interactive installation Dancing Mirror by Seiichiro Matsumura, who after his first presence at WRO Biennale in 2005, this year came back again, was a work that required the presence of the audience to create a joyfull interaction. A hidden camera captured the movements of passers-by and turned them into untroubled choreography of repeated gestures, stepped-up movements tuned with a simple and cheerful melody. It was the entrance piece to the Test Exposure exhibition in the new building of the University Library, welcoming the audience with its simple, yet powerfull charme. While supervising the exhibition there and giving guided tours to our audience, I had witnessed outbursts of laugh and joy resulting from this simple piece. People who were starngers before entering the space of this work started to cooperate on this collaborative choreography. It was also one of the pieces that made up the Little WRO program -a curatorial track, a guided tour through the regular exhibition prepared especially for families and children. It was great to observe these interactions taking place across the genrations, especially during the opening week of the WRO 2015 Biennale, when the artist was present, spending most of the time next to his work. 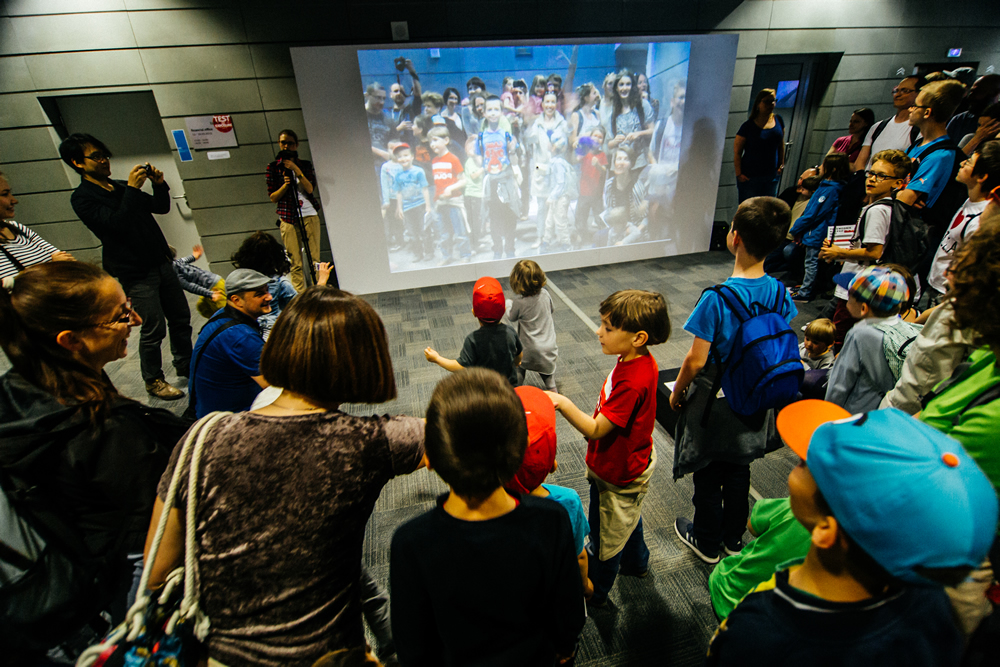 Haruka Mitani, a young artist and co-author of Renai no Daikyouen, an experimental film made by scratching and painting directly on exposed 8mm film has probably benefitted most from her presence in Wrocław. I was truly happy observing her long discussions with such classics of media art as Wolf Kahlen of Germany who had became a sort of her master, spending long hours at the screenings, wandering through the exhibitions, explicitly soaking with the festival’s atmosphere. It was her first attendance at an international overseas festival and I appreciated how intensively she engaged with other artists and their works.

Construction in Kneading by Ryo Ikeshiro, a live generative audiovisual performance premiered at WRO 2015, was another piece that would not be possible without the artist’s presence. The audience appreciated his speculative inquiry into a virtual life form based on a n-dimensional fractal inspired by the Mandelbrot set. The live “audiovisualisation” of data and algorhytmic procedures, generating sound and moving image in real-time has provided an example of a highly original aesthetics. 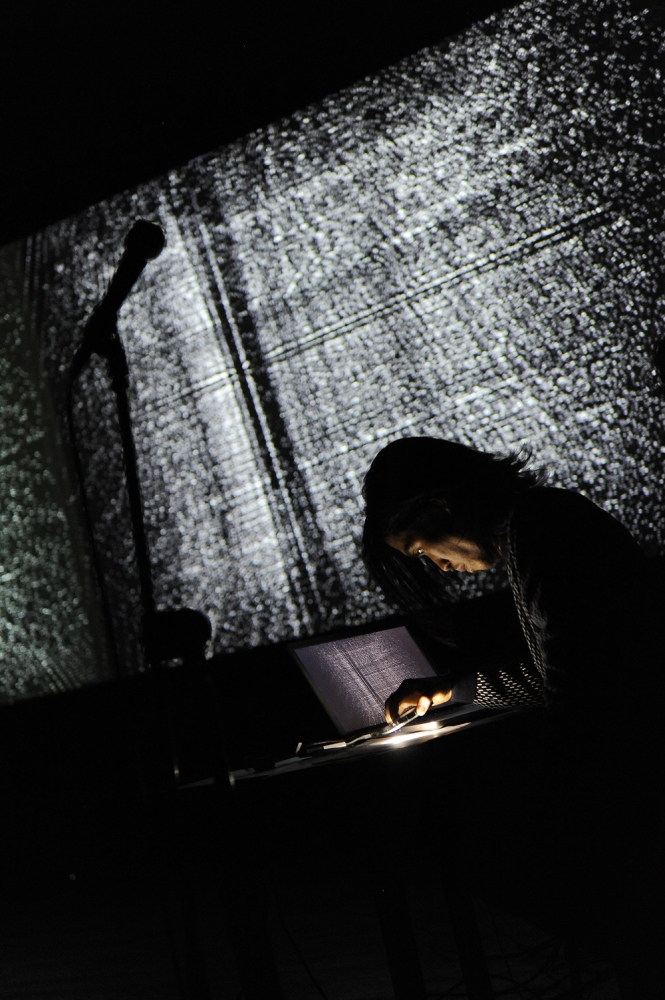 The WRO 2015 Biennale created a space to develop professional contacts and bonds. Such an example of a meaningful presence was the study tour to Poland undertaken by Ms Keiko Okamura, the curator of Tokyo Metropolitan Museum of Photography whom I met earlier this year in Tokyo. Along with Ms Yukiko Shikata, the member of the Critics and Editors of Art Magazines Award Jury of WRO 2015, she was a meticulous observer of the festival’s events. Being there together, we could discuss further possibilities of programmatic cooperation within the Japanese program of the Eco-Expanded City exhibition planned for 2016.

Not all of our plans could be realized: we had to accept our limitations in regard to spatial and logistic demands of certain works, but the overall outcome of the projects is very satisfactory. Due to the ECoC Wrocław 2016 and the next regular WRO Biennale edition in 2017, we have an extended possibilities to carry out projects that couldn’t be realized this year.