With the support of the EU-Japan Fest Japan Committee, Nagomi Kyogen Czech has now played over 700 performances since our date in Leipzig, Germany, in 2007, not least in Tokyo before Imperial Prince Akishino in 2008 and as well at the National Theater in Košice and in such locations as Lithuania, Kyoto, Prague and Brno, but these performances at European Capital of Culture Plzeň and in the associated program at Brno were for us special. Here I would like to review these performances with gratitude. 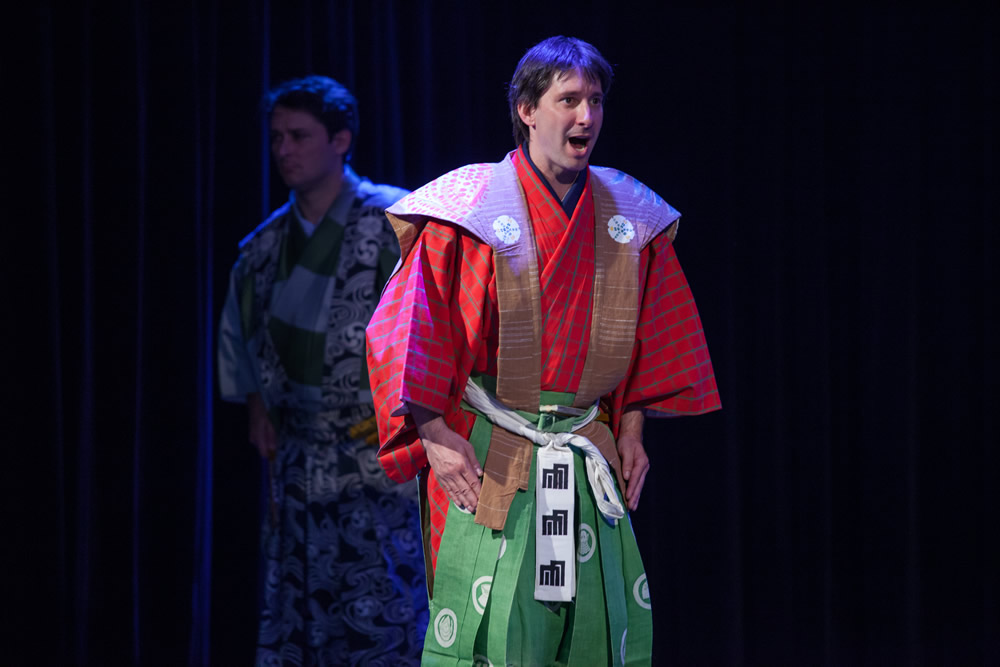 In Plzeň we won acclaim for our bilingual performance in Japanese and Czech with kyogen master Shigeyama Shime and, with some audience members who had traveled all the way from Japan, by ourselves in Czech alone. In Brno a program of children’s kyogen performed by Czech children aged six to nine who persevered with our instruction was received with much warm applause.

These four performances on our home ground in the Czech Republic will likely have indicated to master Shigeyama, and to the EU-Japan Fest Japan Committee which has long watched over Nagomi Kyogen Czech, the slow but steady progress we have made with our work locally. I strongly believe that it was at the same time an important opportunity to demonstrate our raison d’être to a Japanese audience. 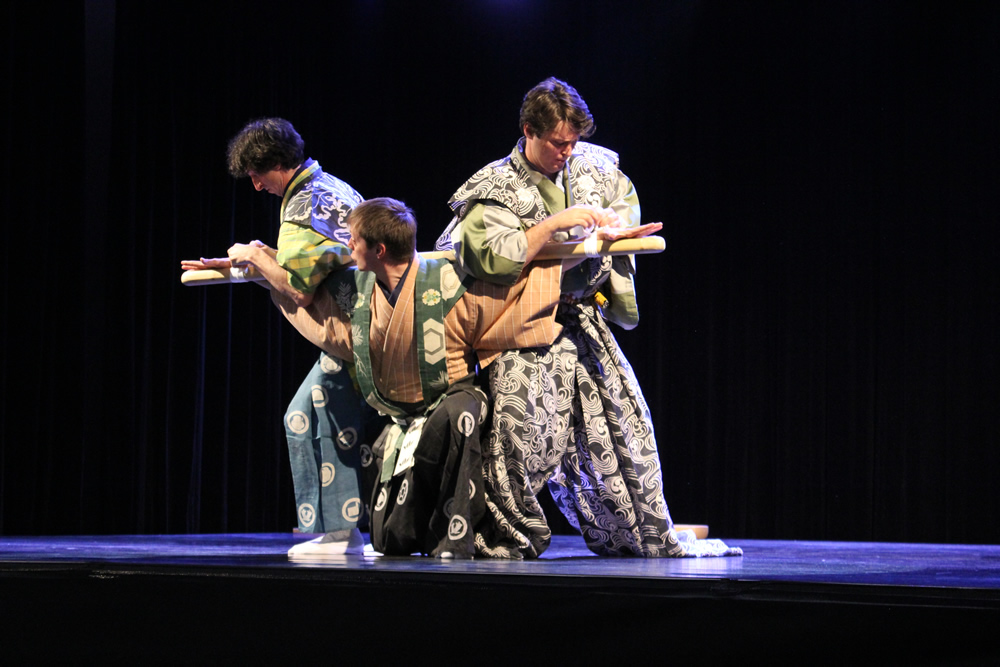 “Hey, these foreigners are performing kyogen, a traditional performing art originating in Japan, and foreign audiences seem to enjoy it.” “Kyogen and this Czech kyogen troupe seem to be gaining recognition in Europe.” “It’s not the case that foreigners cannot take up a fan and dance, if they work at it, just as Japanese can learn to handle a violin bow.” If these were the sentiments of Japanese audiences after we performed, I think these performances truly did succeed.

And just as Japanese people are discovering the potential of Japanese culture overseas, so are Czech audiences undergoing a change in their awareness of kyogen. Bit by bit its depth and splendor are becoming apparent. Kyogen is showing itself in something more than the mere momentary appeal of alien culture. It employs movement, form, text and costume, and all contain “meaning”. In Japanese cuisine, now recognized as a world heritage, “the cook does not use strong spices to engage the interest of the diner, but draws out his pleasure with a focus on fine detail.” Likewise, kyogen makes use an outstanding text to please an audience with laughter while crafting a delicate ambience through dance and chant. It is most splendid, and by no means simple to achieve. 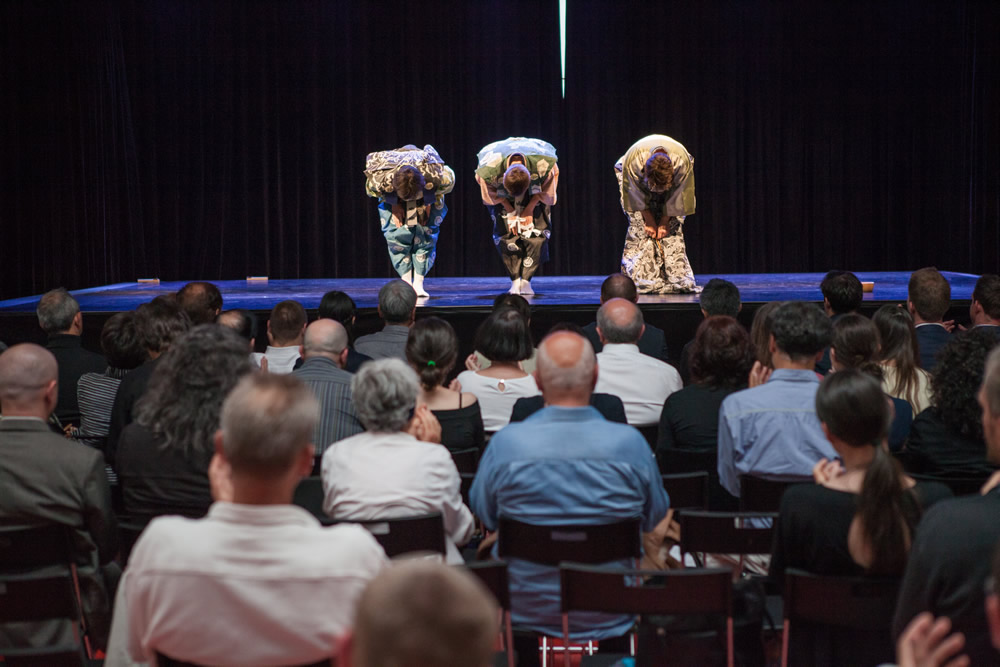 Here is something Shigeyama Sennojou said to me in the dressing room some years ago: “Kyogen is a wonderful thing. Just wear the costume and speak the lines, and even an amateur or a child or a foreigner can make it amusing. But to take it to the next level, that is difficult.”

Since the Meiji Restoration in 1868, people overseas have been drawn to the depth and perfection of Japanese culture, and to the high degree of aesthetics it has cultivated over many long years. People overseas have acclaimed different aspects of Japanese culture, as in falling in love at first sight with the ukiyoe of Utamaro and Hokusai. Unfortunately, the same thing did not happen with the noh or kyogen. Since there was a language barrier to start with, overseas audiences never had the opportunity to gain a “feeling” for appreciating the fine qualities of the noh. It was tantalizing, as a picture might be to a blind person trying to see it. However, by devoting my passion to becoming a bridge for Japanese culture, by studying with Japanese masters, by translating scripts, by researching costumes, stagecraft and much else, we feel that at last we are beginning to see.

I am gradually coming to see what Sennnojou meant when he spoke of kyogen as “wonderful”. With feelings of heartfelt gratitude for the chance to perform kyogen at the 2015 European Capital of Culture, I will now be making every effort to walk step by step on the difficult path to “the next level” as I discover the inner strength of kyogen. 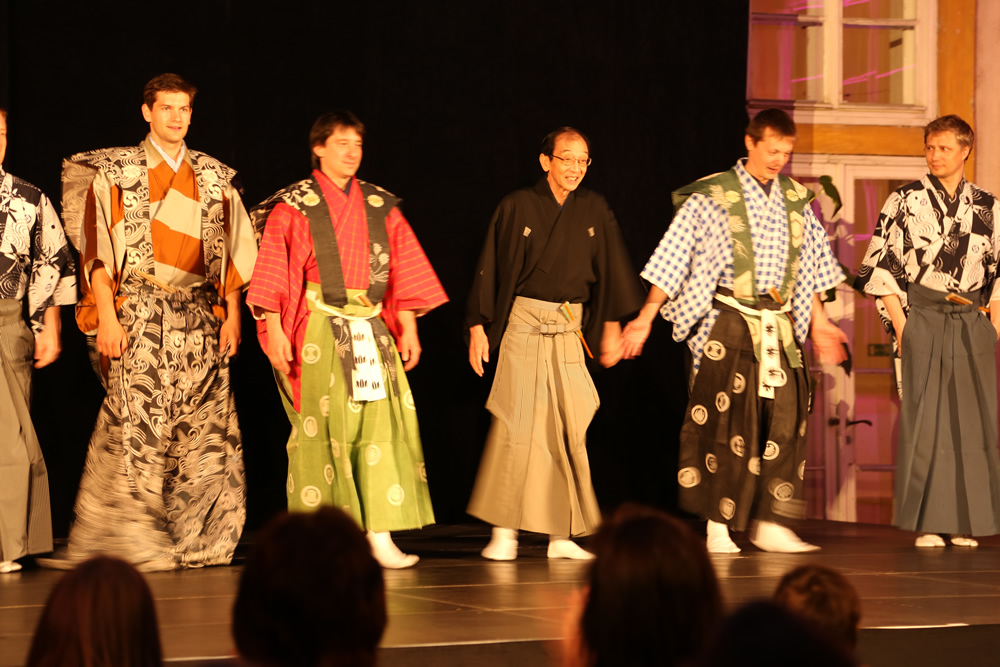