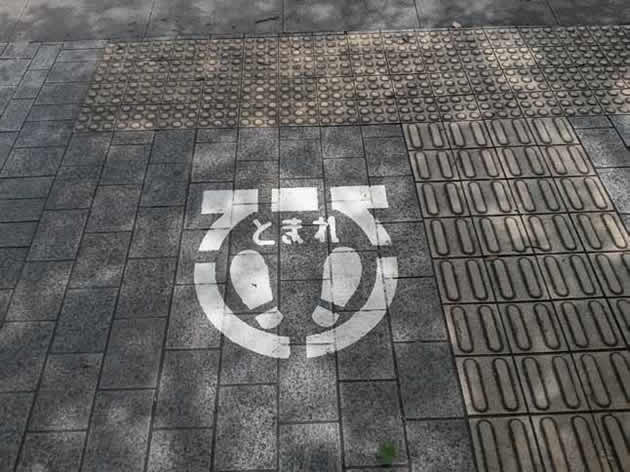 Tokyo is one of the world’s largest cities with 13 million inhabitants and an extent of over 80 km, which makes the area the largest metropolitan area in the world. In Tokyo the word “highway” makes sense since the major thoroughfares rises in big bridge systems over the city’s ordinary streets and roads, while a complex subway system runs underground. Everything is as it’s layered on top of each other, which means that it is more difficult to define what a hidden place is, and what is well known mainstream. If you go behind the big gray concrete masses of skyscrapers many small dense alleys with shops and restaurants pops up, and if you continue walking, you might be lucky to find a Shinto temple, tucked behind the dominant concrete buildings.

At a time when my calendar was open, and I walked random around I found such a small peaceful spot in one of Tokyo’s most crowded areas of Shibuya. It’s often in these uncontrolled moments you’ll get the greatest experiences. This is the time when you put commitments behind you and get experience of moments. In these moments you often discover things you had not expected to see.

Beside the temple a small fine landscaped garden with a pond filled with turtles was placed. A quiet and peacefully place with a completely different aesthetics in the middle of Shibuya’s enormous throng of people, traffic and noisy billboards. Japan is well known for gardens, where every little detail is filled with symbolic meanings often related to zen or other traditions. The random meeting with the temple, the garden and the utter calm in the middle of Tokyo’s hardship was probably the most essential moment of my trip to Japan, which told me that I was on the right track.

My primary purpose of the trip to Tokyo was to find an approach to a zen-inspired reflection space on a rooftop in Aarhus – a quiet place where the city people can relax for a moment, in the midst of the bustle and everyday obligations. The small garden and temple that lay tucked showed me that it is possible, to create tranquil oases even in the world’s largest city.

Shinto (“gods’ way”) is Japan’s indigenous religion. About 117.4 million Japanese are Shinto followers about 89.8 millions are Buddhists, about 1.5 millions believe in Christianity and 11.1 million have other faiths. The majority of Japanese people are both Shinto believers and Buddhists.

In Shinto one believes in the essence of nature and not a prophet or a god. Shinto is a fertility rite, nature worship and ancestor worship, which includes roughly 8000 “gods” – or kami – which covers among other phenomena in nature as sacred trees, mountains and waterfalls, or awe to exalted beings or human figures. The greatest kami is the sun goddess Amaterasu. The Faith means that Shinto believers do not see conflict with other religions, as for example, Jesus, Buddha or Mohammed – they are a part of the whole.

The “reflection terrace” in Aarhus will of cause not be transformed into a Shinto temple garden, but more likely a zen-inspired place with space for contemplation. But in a global world with many religions in the same city, the Shinto way of thinking is exemplary. No matter what religion or tradition you come from, a common place for relaxation and tranquility might just be one of the things we can share if you want. Although I had deselected the idea of building a rooftop garden, as it’s basically the way most people think when it comes to the use of rooftops, the meeting with this place inspired me to bring back the idea of making a single, symbolic and centrally located bonsai garden, to provide a framework for reflection, which also provides space for “meditation and contemplation” or other “method” to focus awareness and to create balance in body and mind.

Before my departure to Japan, I had planned to investigate whether there is an approach to include sports events, focusing on the body’s balance of mind and consciousness. Sumo wrestling, which was my starting point, will definitely be a rethought event on a rooftop, but Sumo is a huge industry with a host to traditions, ceremonies, and a traditional battleground of sand that definitely could be impressive to transform into a platform on a roof terrace. But it will be tremendously expensive.

Through the EU-Japan Fest Committee I was made aware of the difficulty in implementing such a complex and commercial show, which I got the opportunity to experience live. And although there is amateur sumo wrestling at the University of Tokyo, it is still difficult to build up a scene of heavy sand on a rooftop. In Aarhus, I was made aware of the proper functioning Kendo- and Aikidoklubber in Aarhus. 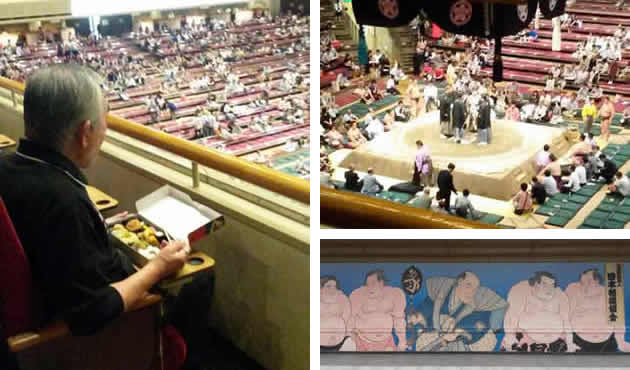 Many martial arts in Japan ends on “do” (dou) Judo, Karatedo, KENDO, AIKIDO. The little word “dou or do” means something as “way” or “method”. The different “ways” are based on Zen Buddhism and attempts to cultivate the human mind by actively learning to concentrate or focus the consciousness, so you can eventually achieve a deep existential tranquility. The goal can be reached by many different ways. Tea ceremony is another way that the Japanese called Chanoyu or Chado, Sado. The knowledge I got through my fantastic hosts from the EU-Japan Fest Committee on the “Do”, and the visits that were arranged for me, where I experienced Kendo and tea ceremony, did put things in perspective, and shows that the combination of a meditative reflection with a small bonsai garden and evenings with Tea ceremony and display of KENDO AND AIKIDO seems obvious. 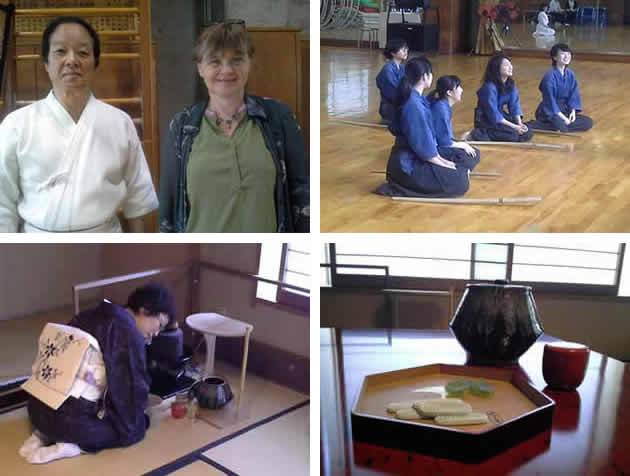 There is a tendency to condense cities while rural depopulation in many parts of the world. This has put interests on the concept of urban farming. The fact is that people lack space to grow crops and flowers in the dense communities. This is one of the reasons why the rooftops of several train stations in Japan now has been transformed to places with small gardens, which can be rented and cultivated with both eggplant, rice, beans, flowers ect. These Soradofarms was started by the East Japan Railway Company, and so far there are at least five Soradofarms in Tokyo and other Japanese cities. Elsewhere rooftops have been transformed to parks, sports or cafes as small space away from the busy streets.

The small cultivation spaces show how to use the hidden potentials of the city rooftops. In addition to the zen-inspired reflection space on rooftop, it is also thought that the Association Hidden Places experimentally will test whether it is feasible to keep animals on a rooftop – pigs or chickens. The Japanese Soradofarms is undoubtedly a source of inspiration to combine crop cultivation and animal husbandry on a rooftop on a week’s trial basis in 2017.

No doubt that Tokyo has been a great source of inspiration for the Association Hidden Places. 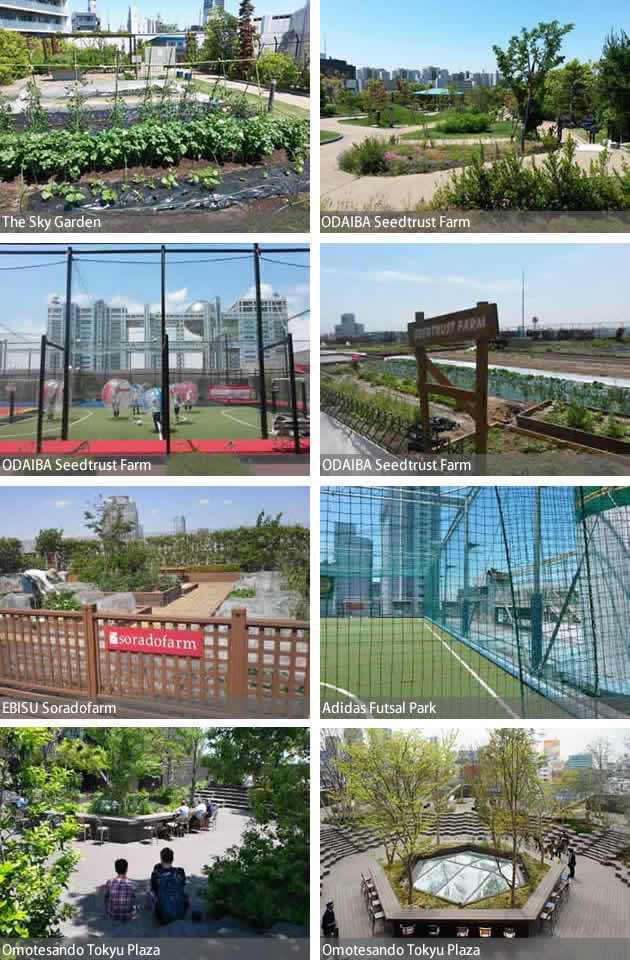