HOME > Column > What I noticed in Pilsen

Use your opponent’s strength, advises aikido. Don’t rely on your own muscle or brawn. The discipline emphasizes relaxing one’s body, releasing unneeded strength. Due to how different this makes it seem from the rough and tumble we tend to associate with the “martial arts”, aikido seems to draw practitioners who seek in it something other than a way to build strength. Many seem to be more interested in beauty or health, in learning its deep spirituality or a pastime that speaks of Japanese culture.
The way I came to aikido was that, while learning about my own mental tics, I noticed that the mind and body are deeply related with each other. It seemed to me that more than being related, each was in fact very much also the other. And so, as a way to change my mental tic of freezing up with tension, I started in on aikido with its emphasis on letting go of tension, of not relying on one’s own muscle – its emphasis, in short, on relaxation.
My visit to Pilsen brought opportunities to re-experience the importance of relaxing and of giving thought to aikido as Japanese culture. 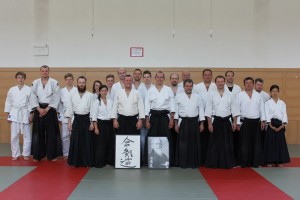 During my five-day visit to Pilsen from the 4th to the 8th of June 2015, on the 6th and 7th I took part in the aikido seminars given by Petr Krumphanzl. Aikido exercises consist of the instructor first showing those taking part a form of the technique he is teaching them as a pattern and describing it to them in simple terms, and then the students pair off and practice the technique. It was basically the same flow and atmosphere as a practice session in Japan, but what struck me as different was that in Japan a student would receive advice when relying too much on his own strength in the exercise, for example, or when her form was lacking. My impression of the practice sessions overseas, meanwhile, was that the students apply themselves to the exercise mutely. It was a curious atmosphere, in which Japan seemed more like what we think of abroad and abroad more like what we think of Japan, and I felt that I had more opportunity than usual to think on my own. As well as exercises in technique, the practice sessions included exercises employing weaponry like wooden swords and staffs, practice in “sensing the opponent’s body” by slowly testing how much an opponent’s shoulders and arms move to one’s rear, and iai face-off exercises to assist with understanding of aikido. Each exercise was of an important movement, and altogether the seminars seemed to bring together much that is useful to both beginners and rank-holders alike.

Time and again during the seminars I engaged in the exercises tense with the notion that “we must perform this exercise so that we each learn something, however small, from the other.” This may have been how I allowed tension to creep into my body too, and right after the practice sessions I experienced pain here and there in my upper body as though the muscles had all tightened up. But I recalled how Petr would call out now and then “Enjoy yourselves!” in encouragement and how the first thing for the students in Pilsen was to enjoy the practice sessions, and so I decided to take part in the exercises with mind and body “relaxed”. And then I found that I was able to enjoy the moment, seeking advice on my own initiative about techniques where I did poorly and actively seeking out partners to work with. Oddly enough, there was no pain in my body after those practices.
This development made a renewed impression on me of the importance of using the body, as we are told again and again in practice, with unneeded strength released and without relying too much on muscle power, and of loosening up mental tension so as to be open to enjoyment in any situation – the importance, in other words, of relaxation. 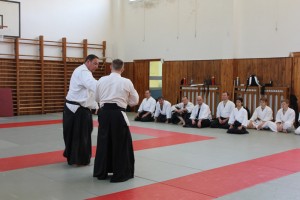 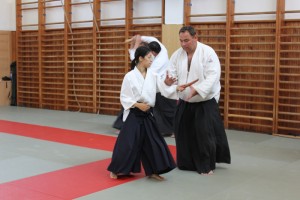 What gave me occasion to consider aikido as Japanese culture was the experience, over the two days prior to the seminar, of attending the practice sessions that people in Pilsen take part in regularly. The participants are mainly young people: office workers and students on weekday evenings, or children at a slightly earlier hour. Although the instructor is not someone for whom aikido instruction is his primary job, he does have proper rank and training in aikido techniques. That practice sessions are held at the high frequency of every weekday is direct indication of the enthusiasm of people overseas for practicing aikido and of how aikido is spreading pervasively throughout the world.
And this enthusiasm shows up as well in their reasons for inviting an aikido instructor to visit from Japan. Though I’m sure everyone has his own reasons, one would be for the chance to learn from that particular instructor and another was to experience the lingering influence of that instructor’s teacher and try to find something in that. 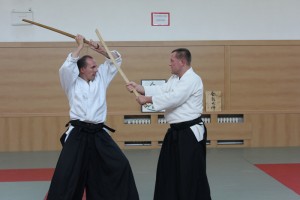 It is natural that as aikido spreads around the world it departs from the framework of Japanese culture and acquires other, national or regional flavors, but I rather think that Japanese culture will continue to run through the essence of aikido and to play an important role in it. I refer not to the visible aspects of Japanese culture, such as the training or formal outfits, but to the salient presence of such aspects as the mindset and the use of the body. For example, even if they do not think of it as “Japanese culture”, people overseas seek these out from many instructors at a high level of achievement, and those of us born in Japan take notice of the Japanese culture running through the essence of the discipline and we feel the importance of continuing to learn it and apply it in practices and in our daily lives. The key to this awareness is in relaxing the mind and body, its continued application leads to one form of cultural exchange through aikido and, I think, rewards those involved in the exchange with pleasure and with recognition of new aspects of their several cultures.

In closing, I would like to express my heartfelt gratitude to everyone at the EU-Japan Fest Japan Committee who provided me this wonderful opportunity; to Petr Krumphanzl, who served as instructor at the seminars; to Jaroslav Sip, who drove the process of organizing the aikido seminars; and to everyone else involved in so many ways. Thank you very much.