[Vol.72] Dreams of a Wondrous Evening in the “Land of People/Light”

Pilsen, the central city in western Bohemia, in the western Czech Republic. In the Czech language Bohemia is “Čechy”, which gives us the term “Češi” referring to the people of the region. I took part in the first Light Festival, an arts event held as part of European Capital of Culture Pilsen 2015.
As well as along the Radbuza river flowing through the center of town, the event involved exhibition of artworks of light in the basement of the beer factory where Pilsner beer originated, inside buildings in the town center designated a historical architecture preservation zone for its baroque structures, and projection mapping, and also in eight locations such as under a bridge and the remaining brick chimney of a retro, abandoned factory. Its significance was in “lending winter vitality” and “rediscovering” the “heritage” of “scenery and place”.

My exhibition space was a thirty-minute walk from the center of town. Below a large riverbank terrace where the Radbuza meanders and spreads out, the approach overlooks a dynamic opposite bank and beautiful nearby village. Along the celebrated waterfront, where the river itself, in forest enclosed by bluffs, was formerly a public swimming pool, are strolling paths, a boat landing and a drugs and alcohol rehab facility, making for a public space at the intersection of nature and the daily routine. It is a quiet place where people walk their dogs and children come and go at leisure.

But on that wondrous evening it took on a different face. 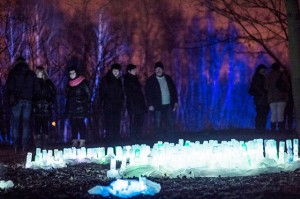 The surface of the river illuminated a deep blue and the riverside trees aglow in whites and blues, a warm candlelight flickered and the space transformed into a magical one just as though plunged into a fairy-tale world. Here everyone gathered around the flames for the endless music and spectacle.
In the pitch black of a forest, part of that world yet separate from it, is where my 400 “light bottles” bloomed like an ice pond or so many flowers, crafted from plastic bottles collected by Pilsen residents and festival staff, colored beads of Czech glass, countless small waterdrop lenses made from substances aspirated from the plastic bottles, and LEDs.
The exhibition space I was at first assigned was in the center of town. The change was made after I arrived, due to the lighting from the adjacent soccer field and for safety considerations. My honest question for this location one could hardly call central was, “Will people come?” While preparing the piece I went alone to this place darker than any I had seen in all my life, stumbling along the frozen nighttime path and anguishing miserably over how readily I bent to the original pitch made for it.

But just where did all these people spill out from that evening? Down the festival track came people dashing with tripods and cameras, families with children, art fans, merry children, couples stopping to smile. The small space was crowded to higher density than at an event in Japan and, there being no difference between Japanese and Czechs in the expressions on the faces of people enjoying light, they created an unimagined solidarity that preserved the fairy-tale country of ice pond and flowers of Pilseners and light.

For all my lights in this piece I used Czech-made bottles. Unlike Japanese bottles, they were of a thin material, pale green and blue like the “forest glass” predecessors of Bohemian glass, and with delicate patterns and elegant curves in the baroque manner. I selected and cut the bottles, and volunteers from Pilsen assembled each one of the lamps. During the term of the exhibition I used LEDs and scraps remaining from the cut bottles to make flowers, and in a workshop with visitors we planted additional ones among my work, where I was astonished by the the care and tenderness of their placement. 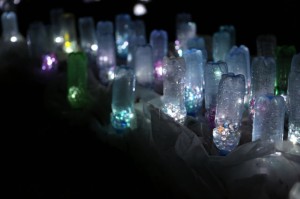 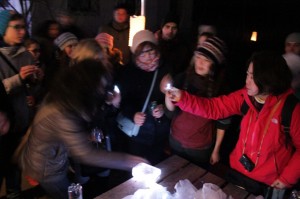 “I can’t join the workshop, but I’d so much like to have one,” and “Can we take in the show?” and “I’m from Electrical City. What kind of batteries are you using? It’s amazing!” People’s reactions too sometimes exceeded expectations. Despite my disarray throughout and the constant annoyance I caused people with my shortcomings as an artist and as a person, with my poor language ability, with my product changes resulting from different climatic conditions from Japan, my pitiful, shoddy handiwork benefited from the support of many people during the process of putting the work together. With help from different people collecting bottles and procuring other materials, doing advance work, providing the exhibition space, drafting specifications during production, executing construction, interpreting and assisting in the workshop and much else, I experienced how splendid are the people of Pilsen — their delicate sensitivity, kindness, sincerity, strength and encouragement. It was for me a time of deep gratitude and much joy.

In the first awards at Smart Illumination Yokohama 2013, a creation of a new urban nightscape “fusing art and energy conservation technologies” held in the city of Yokohama, I won a prize for my “Light Bottles” made up of solar lights, Japanese plastic bottles, laundry detergent and other materials. In line with the concept behind Smart Illumination Yokohama, this floor of plastic bottles, in which I used bottles sold by a company in Fukushima prefecture, at the same time presented the example of the skylight lighting used in slums in places like the Philippines as an inexpensive way of changing the way people live in the city that has the same effect as the deck prism on a boat.

Over the year between then and my Pilsen residency my pursuit was only of variations of that product that I could develop into an installation. Now that I think of it, there was an element of pressuring myself, or perhaps forcing the issue. And thinking that the invitation to Pilsen came because how my use of plastic bottles and solar power engaged issues of ecology and recycling, somehow I tied my own hands in the matter.
Engaging openly with Czech bottles and the people in Pilsen, I remembered that how I first came to use plastic bottles was not about recycling, but in finding a hidden creative utility and function in routine, commonplace products and the childlike emotion with which I wanted to use their beauty and appeal. On the other hand, when I left Pilsen to visit the forest, the industrial park and even the waste processing plant, I regained an awareness that routine industrial products reveal the culture and the social backgrounds of the people who make them. Mustering my courage, I seem to have managed an exhibition that embarked on new ideas exploiting the particular characteristics of Czech bottles — their beautiful form, their feel, their lightness — and the below-freezing environment and other differences from Japan.

Even so, at the introduction of my lights people called them “lightning bugs” recalling the drawings of Jiří Trnka, the famous animator from Pilsen. And that fairy-tale display earned me the honor of mention on the Pilsen 2015 Facebook page for “the conception gained from the work of Japanese artist Kazumi casting light on familiar objects.” It is as if in pursuit of those words that I now seek greater freedom in production and expression as I use light and familiar materials in my work. There are many challenges — in terms of project execution, communication abilities, organizing my thoughts, decisiveness — that this experience made clear to me I must meet, but they will make the task easier and I hope to go on to fix them one by one. 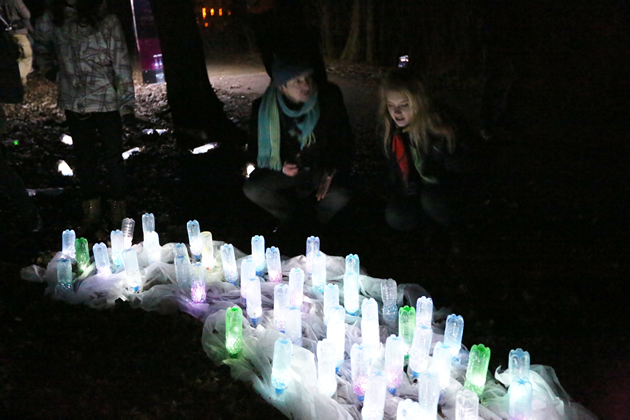