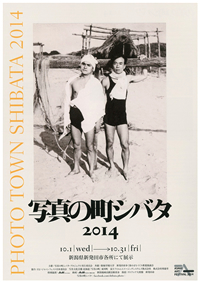 We conduct an activity called Shibata Photo Town Project in the city of Shibata in Niigata prefecture. Run by local volunteers, each autumn the group holds an event also called Shibata Photo Town. The main component is an exhibition called “Town Memories” in the shopping district featuring photograph posters selected from albums, and since last year we have also held a photographer’s exhibition on the theme of “land and memories”. This year it featured work by Arturas Valiauga, a Lithuanian photographer who was the first international artist hosted by our group, to work on volume 11 of “European Eyes on Japan/Japan Today” featuring Niigata prefecture as seen by a Lithuanian photographer. In the winter of 2009 Valiauga offered an iPad slideshow exhibition showing a collection of his work titled “Japanese Daily Menu” of photographs taken during his stay in Niigata for “European Eyes on Japan/Japan Today” together with a new collection called “Between the Shores” depicting people traveling the Baltic Sea.

When curator Mikiko Kikuta first suggested “an exhibition of European eyes on ‘Photo Town Shibata,'” my instinctive reaction was “interesting”, but I felt a touch of anxiety as to whether our small/medium-size regional city Shibata could manage the manpower or hosting capacity to accomplish an exhibition by an international artist.

My anxiety proved needless when crowds of local people visited the event space while the exhibition ran, and not least by the first-day reception attended by the Lithuanian ambassador to Japan and his wife. The Kanemasu brewery provided the venue, and with the warm cooperation of Kanemasu President Takahashi and the whole staff we enlisted the power of an exquisite location for an exhibit called “Japanese Daily Menu” in the form of a brewer’s warehouse. 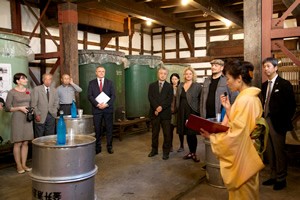 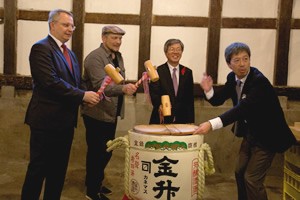 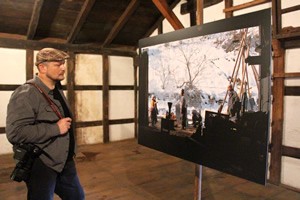 Arturas and his work

Agakita (“North Aga”) is what in Niigata we call the area that Valiauga photographed north of the Agano river. At the center of Agakita, the character of Shibata is informed by both the older traditions of a castle town and its socioeconomic progress flourishing as an army garrison during the Meiji period of the late 19th and early 20th centuries. In the photographs of historical record that remain with merchant houses and the long-standing photography studio founded during the Meiji period, it is truly a “town of photography”. Shibata Photo Town works together with the city and local universities to preserve the culture of photography that is a regional asset and to archive local memories. Something that I also feel when photographing for “Town Memories” is the introversion of Shibata, where we may have photography and culture of good quality but little to present to the outside world, and so I experienced some anxiety over whether an artist or works from a country with which Japan is hardly familiar would be received in a town somewhat like a closed salon. At the same time I was expectant that the sincerity and grace of Valiauga’s work would appeal to Shibata people. In fact, both the artist and his work were made extremely welcome. As well as having visited Japan several times before, Valiauga and curator Egle Deltuvaite fit into Shibata very easily. The day they arrived in Shibata I heard that they were at a day-trip hot springs to shake off the dust from their journey and went to say hello. My first meeting with them as they relaxed in the lounge after emerging from their bath is a fine one. 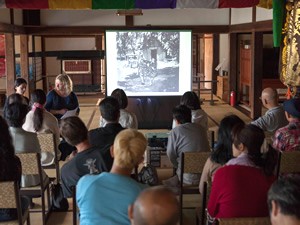 Presentation
“The Current State of Lithuanian Photography”
by Egle Deltuvaite

I understand the point of the European Eyes series to be to “rediscover through the eyes of the foreigner scenery with which we are overly familiar.” The new perspective that I myself gained was rather one that knows no borders: an affection for the activity of people against a background of land and a realization of my mission to keep alive memories of the land. After living nearly 20 years in Tokyo, Shibata as I returned to it had become a land of ossified memories, “a hometown with which I was hardly familiar”. It was because I thought it an opportunity to unravel these that I joined the activities of Photo Town Shibata in 2013. Driving through the snowed-in agricultural zone the other evening as steam rose from the snowmelt pipes, Valiauga’s work came to mind. I felt that I was inside what ought to be for me a parallel world: Niigata as seen by a Lithuanian photographer. This is at once evidence that he got close to the nasty Niigata winter and the activity of the people who live there and also, I felt, a sign that his memories had cycled to me via his work. If they cycle and re-cycle this way, are the memories not alive? This is a theme consonant with our “Town Memories” project.

The day after the opening of the exhibition, Egle gave a presentation on “The Current State of Lithuanian Photography” at Hokoji, the family temple of the old feudal lords of Shibata. It was a symbolic location for her discussion of the relationship between photography and Lithuania’s unhappy history, and the audience of 30 were enthusiastic. After her talk 26 gathered for a social event titled “Getting to Know Lithuanian Food and Culture” at the Taico-ya cafe, and conversation bloomed as we sampled Lithuanian foods. The venue was also showing the photo exhibition “Japanese Eyes on Lithuania” of work by Yukihiro Yoshihara from his visit to Lithuania, making for an opportunity to experience Lithuania in several different ways. An artist resident in Shibata, Yoshihara is one of the founders of Photo Town Shibata and, partly from his connection with Lithuania after visiting in 2013, devoted his energies to making this exhibition happen.

At the reception His Excellency Ambassador to Japan and Minister Plenipotentiary Egidijus Meilūnas made an impressive speech, remarking, “It is what joins together people of different countries, faiths and backgrounds that we call culture.” I had the keen sensation that this really did happen in Shibata, and through photography. The ambassador and his wife were wonderful people, and between them and the gentle Arturas and Egle, Lithuania has a growing fanbase in Shibata. In a continuation of this happy friendship, a screening and exhibition of Yoshihara’s work “140 Years of the Yoshihara House” was held at the Lithuanian embassy in Tokyo in February 2015. For us it was something special and an honor to be able, together with the ambassador and his wife, to share the history of the Yoshihara Portrait Photo Studio, a symbol of Photo Town Shibata. In their distance from the center and their coastal locations, Niigata and Lithuania share similarities of history and climate, and I feel that their cultures too resonate. Arturas and Egle also expressed hope for re-invitation to Niigata on another project and for our relationship to continue in future. 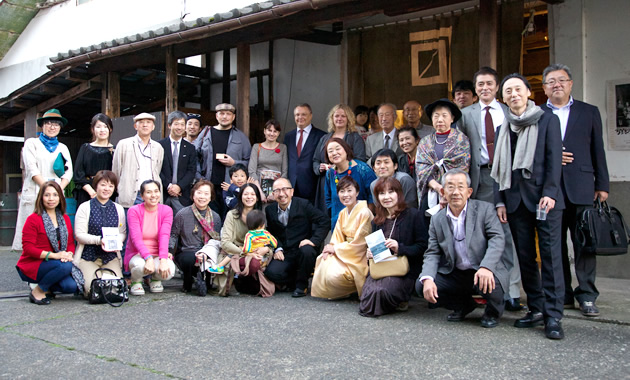 Participants of the reception.
Mr. Yukihiro Yoshihara (middle in the front row)

In closing, my regret is that there is too little space left to name everyone who helped, but I would like to express my gratitude to everyone involved who assisted with my inept managerial efforts.