The 22nd EU-Japan Fest
International Youth in Concert in Riga2014

“How about a trip to Latvia?” It was the middle of March when Secretary-General Kogi put the question to me at the Swedish embassy.
Take Fény to Latvia? We would have only four months to get ready. The children were about to start a new school year: How much could they be involved? My mind swirled with these and other worries. But it was Latvia, the great land of choral singing that I’d heard of since I was a child. It was a song festival to be held there! No mistake but this tremendous opportunity would be our first and our last. My wish above all was to take these wonderful children standing before me full of enthusiasm. With that thought in mind, it didn’t take long for the parents group, always unstinting in their support and encouragement, to reach a conclusion.

Four years on from taking part in European Capital of Culture Pécs 2010 . . . The choir was now a young one, half its members aged twelve and thirteen. Parents and children came together from the start and worked as one so that we were perfectly prepared for Latvia. These being young children, I worried about their frame of mind, trying to shift them from anxiety to anticipation as our departure date drew near. And when the day came, everything was ready. 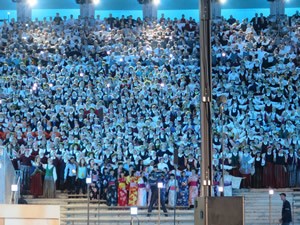 The children were tougher than I’d imagined. Each day was a grueling one, but I heard no whining from any corner. Just once, when we were sopping wet after a heavy downpour on our way to the World Choir Games (WCG) and we’d left behind a rain that could fall again at any minute to board a bus weary and wondering whether we would be able to change before taking the stage in 30 minutes, the youngest of our singers ran out of steam. It was then that one of the bigger children said, “We’ve come all this way and now you’re going to pieces?” That’s what we needed! We can do it! Encouraging each other, we quickly changed clothes inside the bus.
As it turned out, the rain held off during our performance, and I think proudly representing Japan at such a wonderful production was etched deeply in the children’s memory. The grand choir of 20,000 was truly magnificent! Sounding like a cry from the heart of the Latvian people, their voices were somehow melancholy and yet warm. Taking pleasure in the sound of their voices, I was trying to think of the Japanese counterpart to the song . . . and found none, which left me a bit forlorn.

As Fény we have been blessed with regular opportunities for interaction with choral groups from overseas. Each time the children have practiced so they would be able to sing a song from the other group’s country in that country’s language, and the WCG was a good opportunity to reap the fruit of those efforts. Once we reached the hall, a Fény group went in search of the Hungarian children to sing to them in Hungarian. When I saw them form a circle far off and heard a cheer go up, I thought they would be singing together in Hungarian, but it turned out they sang “Katyusha” in Russian together with some Russian children and then “Siyahamba” with South African children in their language. Admiring how adeptly they pursued international exchange in the other children’s languages, I was also moved by the circle of children that formed through song. No language barrier to be found there. Even if they couldn’t converse, they shared their feelings through song instead of language and became friends regardless of nationality. Watching the happy children, I was truly happy that we’d come. 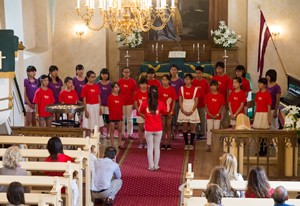 And then there was the church performance that I had pleaded for. I had long wanted to give the children the experience of singing in the resonance of a church so it was the greatest joy to accomplish this. We had no rehearsal and unfortunately had to appear in t-shirts and shorts, but the children were marvelous! From the moment they began singing I felt something hot welling up in the corners of my eyes and I stood as much of it as I could, but when I saw their faces that was it for me. Who was it that cried first? was the question of the day, and no mistake but that it was me. Use song to experience life with emotion! is what I always tell the children, but it’s always myself who is more emotional than anyone. I was swept into a vortex of emotion. I think it spread to the audience and they experienced emotion too. It was a concert that reminded one how it is only when singers experience emotion that an audience will as well. I would like to express my gratitude to everyone who arranged for this concert, a once-in-a-lifetime experience.

The International Music Festival for Youth took place in fine weather and a lively atmosphere. For our outdoor performance I had been worrying about the acoustics, about the piano right up until the day we appeared, but when the time came it was my costume that was the problem. And then we had to arrange yukata for the group of children whose trunk had not arrived. That something like this would happen was beyond expectations so in fact we felt rather overwhelmed (keeping it from the children) from the very beginning. Thanks to Ms.Gunta and the Riga Chamber Choir, however, I gained the undreamt and precious experience of wearing Latvian costume. Such flexible improvisation was truly a blessing. Even now I laugh to think of the doubtful look on the children’s faces, but it could only be from Latvia that we have the splendid memory of the children wearing yukata and the conductor in Latvian costume. The children and everyone else looked wonderfully happy during our performance on a gorgeous stage. Since we didn’t have a mike check or any kind of rehearsal, there were a few stumbles but the children made it through on gumption and smiles! As I stepped off the stage, an older woman handed me a basket of red fruit, saying “Thank you” in Japanese. I think my eyes must have been welling with tears. Whether it was someone who spoke Japanese or someone who was moved by our song, by the time I realized I wanted to talk to her she was nowhere to be seen. It was like this after we sang at the church as well; the kindness and warmth at the bottom of Latvian hearts was always present for us. This may be an important thing that we Japanese, children and adults alike always too busy, have forgotten. 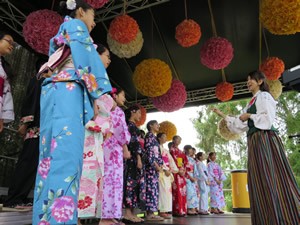 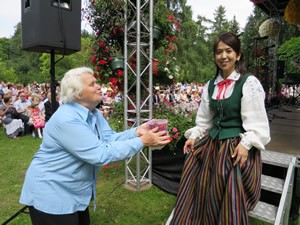 The children had the extremely valuable experience of six-day homestays on this trip. As the children have described it in their own reports, the Latvian families took them in and treated them as their own. This was clear to us every morning just by looking at the children’s faces, as well as from the way they speak of it that makes their eyes shine. We are truly, truly grateful.

For the children there is no mistake that everything was fresh on this tour. They had a sense of where Japan fits into the world, and many opportunities to consider what it is to be Japanese. They learned how song is an avenue to many wonderful friendships and experienced for themselves the tremendous power of song, and I am confident that this absolutely has the power to affect the children’s futures.

I would like to express my gratitude to everyone at the EU-Japan Fest Japan Committee and to everyone else who assisted with Fény’s Latvian tour. My heartfelt wish is that these wonderful activities will continue into the future. Thank you very much.