Can there be anyone in the world who has not seen a tree rooted in the ground? Even in desolate desert regions or in cities filled with concrete, one can always find trees with their roots planted in the ground. Bonsai is the expression, within a pot, of scenery featuring trees that lies within the mind. This is why there are no factional schools in the practice of bonsai. Rather, our teaching is that bonsai is about learning from Nature. One trains a tree nurtured in a small pot and raises it in good health. Given an environment where plants grow, bonsai is something that anyone can enjoy without regard to age or gender, even in environments with different languages, cultures and histories. Without ever leaving the earth, their living beauty often appears as one of the family who develops together with you as time passes, or as a teacher showing you important things that may be learned from the providence of Nature. 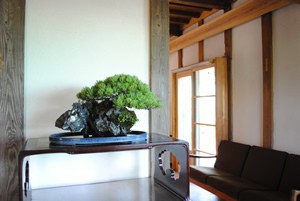 It was early in the year that I received a request to appear at the 17th Bonsai Slovakia fair to be held May 24 to 27. It would be my second visit to the Slovak Republic, following Cultural Capital of Europe 2013 held last year in Košice. I hadn’t even dreamed of visiting the very next year, but it came about through the passionate request of Vladimir Odnejčík, who since 1988 has operated Bonsai Studio Nitra, the first specialist bonsai shop in Slovakia. I have heartfelt gratitude for how my encounter with him led to this opportunity to visit Slovakia again.

Bonsai Slovakia is a composite event that Odnejčík has held annually since 1998 with bonsai as the core attraction, but featuring tea, music and other attractions as well as bonsai in presenting cultures from around the wider Asian region. Bonsai from around the country are displayed individually on their own low tables just as in Japan, and some spaces are distinctively decorated, making for a rich variety of exhibition styles. There are shops offering bonsai, tools, tea, tea utensils and various other articles so that visitors who take an interest can get started right away. 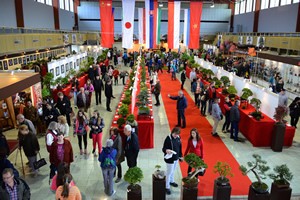 My invitation was to appear in a bonsai demonstration at Japan Day, an event held on the second day of the fair. A demonstration consists of applying, before an audience, techniques to an entirely ungroomed tree that has been planted in a pot in the cultivation stage and completing, within a given time period, the work of orienting the tree as bonsai and styling its form. One identifies the tree’s personality, begins with establishing its front and angles, and then employs pruning shears and wire to style the trunk and branches.
For my material I used a juniper native to Slovakia. On the morning of the demonstration I selected one of the trees cultivated at Odnejčík’s home that was suitable for demonstration and brought it to the fair.
May 25th, Japan Day. His Excellency Akio Egawa, Japanese ambassador to Slovakia, offered some spoken remarks, and the various presentations of Japanese culture included a samisen performance by Czech resident Kenya Sato, and sencha and matcha tea demonstrations. 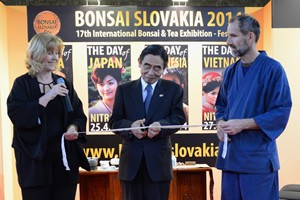 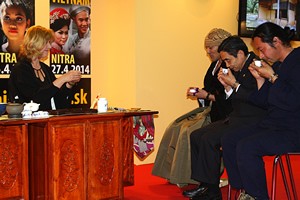 The bonsai demonstration began at two p.m. With me on stage were two bonsai enthusiasts from Poland, one from Italy and three adorable siblings, two boys and a girl ages eight to twelve, who enjoy bonsai in Slovakia. We had three hours to do our work.
As we each set about our work on the stage, Odnejčík as master of ceremonies provided detailed commentary on what we were doing and took questions from the audience.
I first offered several candidates for the front of my bonsai and, while seeking opinions from the audience, drew out the personality of the tree and determined the front that contained its possibilities, all the while explaining my thinking. I then spent as much time as I could on pruning and wire training as I worked towards completion. In the pruning stage I removed the unnecessary branches, lopping off about half the tree, and then wound the branches in wire and arranged them in suitable positions. What I mean by a suitable position is one that, while a person is making alterations, will not produce an artificial flavor at the stage when the wire is ultimately removed. Bonsai are formed objects, but my personal understanding of bonsai is that if you can devise a “form that might exist in Nature but does not, or that would seem not to exist in Nature but does,” the shape that it will take after some years have passed will be a fusion of the human and the natural. The finished piece was what we call a “semi-cascade” (han-kengai ), in which the tree grows downwards but not below the pot, and I felt I was able to give the tree a direction for its form as bonsai.
The demonstration finished a great success, and as I stepped off the stage a man came to me with a question. “Was it necessary to cut this branch?” Well, I’d cut it because it was necessary to do so, of course, but it appears to be true both overseas and in Japan that many bonsai enthusiasts have misgivings over the action of cutting a branch. They accept it when I explain that one prunes branches considering the shape of the tree overall and the way it will grow in future, and the initial pruning, which takes care of some seventy percent of the work, comes to require judgment taking into account its present and future state. 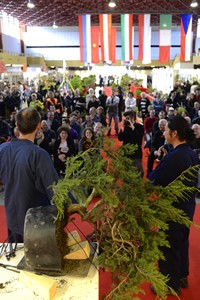 I stated above that bonsai is a pastime one may enjoy wherever plants may grow, but there is one more important thing. This is that the trees will wither without human attention. An environment permitting human attention is one in which the tree may be nurtured without serious harm. More than a few bonsai trees have lived longer than any human being. Given a society and household at peace, bonsai may live as bonsai in a world without war or conflict. In Japan many trees survive that have been handed down even in the midst of numerous critical difficulties. My wish is for bonsai to pass their days as bonsai in countries around the world as well as in Japan, for their beauty to inspire people over time, and for bonsai to take root in the world as a “seed” constructive of peace.

I truly look forward to someday visiting Slovakia again and seeing that the bonsai I initiated there has grown in health. 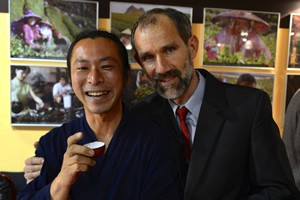 In closing, I would like to express my heartfelt gratitude to the EU-Japan Fest Japan Committee and to Mr. and Mrs. Vladimír Odnejčík for providing me this opportunity.