I always thought cultural exchange gives some expanding and widening of consciousness – as well for performers as audience. This is very important point for cultural understanding and this is the way how culture can foster mutual communication between different nations. Also I personally have a desire to see and to work with admirable Japanese butoh and young contemporary artists and dancers on our stage. Also I noticed it is necessary to introduce local audience with amazing Japanese artists. That’s why I put my effort for making such event as Japanese dance programme in Latvia. Sometimes it feels like to move mountain when struggle and effort worth it. And it’s become reality because we have such a good and reliable partner as EU-Japan Fest Japan Committee office. Also I am thankful to our festival team which was very helpful and open for my offers. This year during international contemporary dance festival TIME TO DANCE Latvian audience experienced different and controversial Japanese performers – for the first time in Latvian dance history! I really felt happiness when I experienced creative process of collaboration as well enjoyed masterclasses and performances.

As Latvian leading dance critic Mrs. Dita Eglite mentioned in her article about the festival: “Japan’s presence in the festival had a double meaning. The biggest winner definitely was audience. They had the opportunity to see a very good, professional performances.” 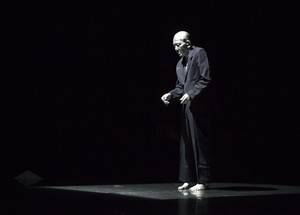 Butoh master’s Ko Murobushi presence created special spirit of the festival – Mrs. Dita Eglite described her feelings regarding Ko solo: “Ko Murobushi’s peformance “Ritournelle” provided an opportunity to see the artistic essence of butoh and the performance of real Japanese. As mirroring the fact that for Eastern culture bodily thinking and awareness are more important rather than rational, during the performance my body both intuitively and instinctively came close to the story of Ko Murobushi’s body.”

Opening of the festival were taken place in the beautiful medieval churche’s garden. Yukio Suzuki company’s performance “Waltz” were inviting audience into passion of Japanese body in the set of European art’s images. As Yukio Suzuki says after the festival: “It was great experience for me to perform in the yard of church which has very good atmosphere and makes our performance more strong, beautiful. The festival also is the place to communicate with many artists and audience. We saw each other works, talked about our expression. I believe that it will lead to next projects.” 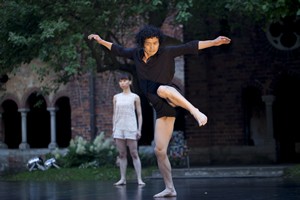 Also public was very moved by Japanese interdisciplinary dancer Hiroaki Umeda’s performance. He performed stunning dance technique together with expressive multimedia – those elements very obvious built up image of contemporary Japan ? offensive advertisement, cyber-human movements and some very touching, still moments of inner enlightenment. As Mrs. Dita Eglite says: “Hiroaki Umeda’s both performances demonstrate how Japan charasteristics are cleverly connected to the possibilities of performative practice by modern technologies. As there were very precise nuances of imaginary play with the video, so my body has experienced this connection as physically and emotionally.” 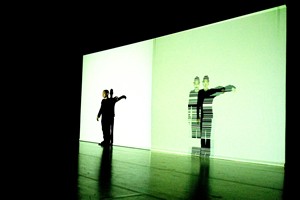 I suppose it was a great success to see different generations of Japanese artists during festival. Younger participant – visual artist Soshi Matsunobe were collaborated with established butoh dancer Ko Murobushi as well with me, Latvian dancer Simona Orinska. As I was involved as an artist in this project “Z.I.M.E.” I would like to express my gratitude to Ko Murobushi for sharing his plentiful artistic experience. This was a very special meeting for me – through Ko’s personality I can clearly imagine his epoche which is different from my life experience and art’s statements – sometimes challenging, sometimes very close. The most important things I learn from Ko Murobushi – how to be very profound in artistic statements as well keep focus, honest and clear body language in dance. Also Soshi Matsunobe talked about his artistic questions regarding collaboration: “Is it possible to give a story and a decoration to the dance which denies a story and a decoration? I set it as the purpose of this stay to solve this question and to make new type performance… Finally I made “a figure of cube made from only light”, and the image seems to be floating in the air. This is “middle of decoration as an object and decoration as a lighting”, “middle of figure and ground on a stage”.” 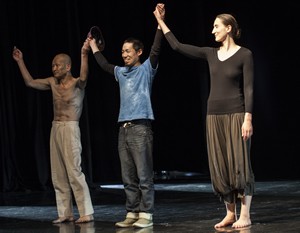 Also Ko’s manager Kimiko Watanabe has a reference regarding experience during the festival: “It was pleasure for us that we could participate in the Festival. We are very thankful for people in Festival who gave effort to invite us from Japan. It is the first time for me to visit Latvia and I got many impressions. Organisation of the Festival was fantastic and also audience was so nice. They tried to be with performers, dancers who came from Japan and it created beautiful moment in the place.”

Soshi Matsunobe as visual artist also collaborated with Latvian dancers and choreographers in closing event of the festival which was set in an amazing art place called NOASS on the river Daugava with stunning scenery of Old Riga. Soshi showed lot of effort for both collaborations – he made lot of images and finally has a nice and humorous performance as a performer with his piece “Humming”. Also we made some focus on Japan, inviting local Japanese people for making masterclasses of Calligraphy, Sushi making, Origami and Japanese language. Finally it was a great communication between Latvian and Japanese people and all evening has a very wonderful, light, uplifting, joyful atmosphere.

We also have some visions and ideas how to continue collaborations in the future with Yukio Suzuki as well Ko Murobushi. Hiroaki Umeda and Yukio Suzuki also expressed interest to work with Latvian contemporary dance students in the future. So we keep on move this mountain – and finally it will transform into light and colorful butterfly.