” … in my experience, Tokyo crossings are very much like the circular paths as I have been encountering here in traditional Japanese gardens, thoughtfully designed through the garden-city landscape. People immerse themselves in their (digital) worlds but at the same time they belong to this extended »flock«, moving, at intervals, without catching an individual with its touch. Solitude in gardens is an obvious thing, whereas in multidirectional pedestrian crossings, it is different, the dynamics between an individual and the crowd is extremely intense and fluid. Sequences of red and green are structuring the choreography of life, of walking and standing still. The movements, voices, words are folding the noise and silence fields of time …”
(a fragment from the author’s working notes, Tokyo, 12 November 2013, 22:31)

During my short inspiring project trip to Tokyo, I was most impressed by its traditional gardens, multidirectional pedestrian crossings and sonority aspect of both. To me, crossings such as the one in Shibuya were like contemporary gardens with circular paths where each person takes their own “infinite path”. It was here that I performed my “Infinite Path to Eternity” (November 18 2013, 18:51, 12”, soundwalk fragment:http://aporee.org/maps/work/?loc=20754). When walking, people constantly draw movement curves along these paths, their rhythm determined by light and sonic signals resembles dictated stillness. The principle of circular movement is used for these crossings, just as it is for gardens. It really is possible to take “the infinite walk”, to draw the infinity symbol (∞) by walking. 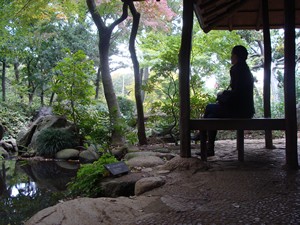 These gardens are embraced by a distinctively urban landscape with skyscrapers and other tall surrounding buildings creating a constant artificial background for the gardens sonority. Goddess Ekho is fully enriched here, her musically gifted roar never ends. Given their spatial, visual, haptic and other sensory characteristics, gardens represent specific and temporally sensitive sonic field. Interests in the formation of sonic areas are changing and so is their intended use, their actual and potential effects. I am much interested in researching this on a more profound level.

Poetry sonor, chrono-spatial poems is something I do in connection with walking in natural and urban areas. (Paths for Poems, the chrono-spatial poems archive:
http://aporee.org/maps/work/projects.php?project=pathsforpoems). I use sound recording also as a medium for archiving my own language flow, immersed in sonic spheres of the environment. My poems are not composed by writing but by walking, standing still, uttering, with the flow of out- and inside personal spaces. Chrono-spatial poems are trying not just to capture a copy of amplified moments, but to isolate an extended frame of time-personal time, confronted with unpersonalized time of surrounding.

Gardens have been the locus of many of my works so far, sonority and body movement-walking-being in the centre of my interest. To me, walking is a meditative practice, a way of emptying the rational thought to give way to the poetic language. In Maribor, where I live, a part of the city park is called “the Japanese garden”. It is designed around a maple tree, a small pond, a stream and a footpath. It is here that an important part of my sonic poetry was composed; such as the walking poem, 31 March 2013, 18:47, 3’10”, sonopoetic path, Maribor :http://aporee.org/maps/?loc=17412&m=hybrid). 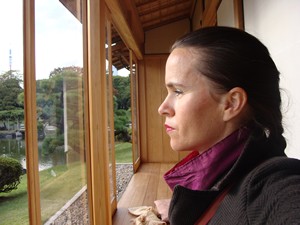 While in Tokyo, I prepared a specific variation of mywalking poems -an audio miniature for mobile phone, entitled “her walking poems: folding Maribor Tokyo” (http://aporee.org/maps/test/edit/mfm/?id=145). It consists of fragments of poems, uttered and recorded at the location of Japanese garden Maribor. For this piece I relocated sonic material from Maribor to the Shibuya multidirectional pedestrian crossing. After one transforms his mobile phone into the temporary radio receiver (see this link for details on “radio aporee miniatures for mobiles “, created by Udo Noll, Radio Aporee, http://aporee.org/mfm/),one can take a walk through poems, listen to them while he or she is executing one’s own walking choreography. Another miniature I prepared at the location of Japanese garden in Maribor, where I expanded in-situ poetry sonor with sonic material form Tokyo gardens and crossings (http://aporee.org/mfm/tracker.php?id=120) Whilst listening to voices and sounds, also the recorded ones, one travels within the ethereality of concrete reality. Voices are like intermediary portals, while moving through them, they are not only being condensed by time and space, but also driven by the zero gravity of the travelling body.

After experiencing aesthetic value of some of the traditional gardens, enjoying their serene beauty and inspiring sonority, I hope to find possibility and support for further research work on natural and cultural landscapes and their sonic fields, to continue with performative field recording practise throughout traditional Japanese gardens in Tokyo and Kyoto, with locative poetry sonor, study of philosophy and aesthetics behind the materiality and visible and to extend audio archive of sound modalities of gardens and crossings
( http://aporee.org/maps/work/projects.php?project=gardenscrossingssonority).