HOME > Column > SWEDISH STYLE IN TOKYO 2013 BACK IN TOKYO 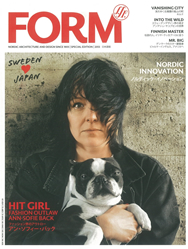 For five years I was lucky enough to live in Tokyo, where my husband served as the Swedish Ambassador to Japan 1997-2002. During these years we experienced the growing attraction between our countries. This was the era when we initiated Swedish Style in Tokyo, a multicultural lifestyle event, which has continued ever since. In the other direction we arranged a huge Tokyo Style event in Stockholm in 2004. Many bridges were built these past years, and the traffic is still as intensive in both directions, albeit in new free forms. During the autumn of 2013 Swedish Style was present in Tokyo through exhibitions and a unique Japanese issue of Form magazine, thanks to the support by EU-Japan Fest Japan Committee and other partners.

Since 2004, I am the managing director of Svensk Form, the oldest design organization in the world, founded in 1845. We also publish the magazine Form since 1905, bringing Nordic Architecture and Design to readers in Sweden and internationally. Considering the good relations with Japan, and the interest for Swedish design, we decided to make a special issue in Japanese of Form magazine, intended for longer life than our normal series. On November 4th, we arranged a launch at the Tsutaya Bookstore, Daikanyama, in cooperation with the architects behind the building, Klein-Dytham, living and working in Tokyo. At the launch a talk was arranged with the participation by Swedish Ambassador Lars Vargö, Astrid Klein, Mark Dytham, Teruo Kurosaki, and the Japanese Fashion designer Junko Koshino with husband Hiroyuki Suzuki. Klein-Dytham Architecture are the founders of the popular speed presentation PechaKucha Night, which started in 2003 and has now spread to over 700 cities worldwide. During Tokyo Designers’ Week, we made joint venture during their PechaKucha Night before some 1000 people, where Form was presented. Form magazine is available for Japanese readers at Tsutaya Bookstore, Midori-so, the Swedish Embassy, and through our partners of the project. 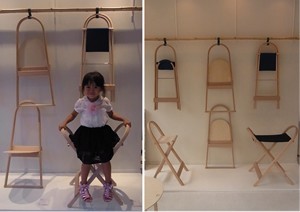 The PG Gallery, represents several Swedish brands and designers. One of them is the eighty-year-old master Åke Axelsson. Just as the youngest generation, he has moved over into small scale and flexible furniture, in a new Nomad series, everyday chairs, available through his website. This series sums up 60 years of his active career as interior architect, designer and co owner of the company Gärsnäs. A retrospective was shown in Stockholm, and two exhibitions followed in Tokyo, arranged by his partner PG Coad & Materials in their gallery, as well as in Volvo Showroom in combination with an art exhibition by daughter Katarina Axelsson and artist Shinichiro Ogata under the title Sweden Style + Tokyo Style, arranged by Joni Waka. Åke Axelsson was one of the first to make Swedish Success in Japan in 2001. PG Gallery also exhibited a new series of chairs made by Japanese Designer Hiro Tsukue, living and working in Sweden.

The exhibition Plenitude was shown at the Swedish Embassy through October, consisting of textile works by 18 Swedish and Japanese artists, curated by Thomas Laurien and Yasuko Iyanaga. As the title suggests, the artists have tried to explore the expression Plenitude and the richness of the time consuming working process. The shibori technique is originally Japanese, but has today become somewhat of an umbrella name for handmade textile craft, and how you can color, manipulate and transform them into various shapes and concepts.

Sweden has several companies in the forefront of children’s products and environment, the theme of the Kid’s Week at the Swedish Embassy produced by Business Sweden in Tokyo on October 25-27, which attracted some 1 700 visitors, including media. The rights of children has long played a vital role in Swedish design philosophy and society. Products should be functional, well-designed and inspiring to a child, and can contribute towards a secure, safe and stimulating childhood and adolescence. 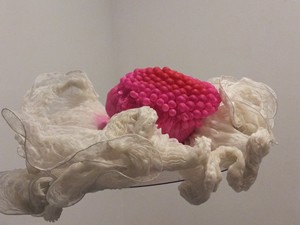 Our devises People before Products, Sharing not Showing off, and Fun, friendly and informal have always guided our projects, all created together with the local partners. Without their engagement, it would never have has such an impact. One contact led to another. Collaboration is key. It is never enough to sit by the desk at home and produce projects for abroad, if the communication goes only one way. Besides quality, there has to be a dialogue, a genuine local interest if you wish to reach the right audience.

The first Swedish Style in 1999 was rather modest, with the Swedish Embassy, as always, as the hub. It was also the era in the end of the 90’s when Swedish design and lifestyle was booming around the world. Art, photography, dance, music, food, fashion, design and food in the broadest sense were on the agenda. Swedish style was always run on a low budget, fueled with local enthusiasm, guerilla marketing and quality cutting edge culture. Tokyo is a huge and attractive city. The many young volunteers are today the best ambassadors for the Sweden-Japan relations. When budget was small, we always gave priority to bring people over to make their own contacts and relations, thus continuing on their own power. 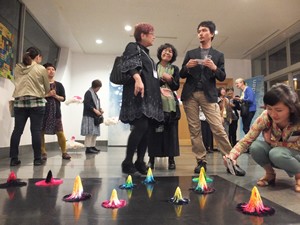 The cultural core was crucial for the success, including experimental and problematic angles as well, never just the glossy image. Japanese tourists today travel to Sweden to do Life Seeing , wanting to take in a part of the whole Swedish lifestyle. The Japanese coming to Sweden appreciate our tradition of good design at affordable prices, natural in every day life. The informal, democratic and non-hierarchical approach, also had impact in the strongly hierarchic Japanese society, opening new possibilities.

The interest for Japanese culture in Sweden is just as strong. The traditional refined culture has long been subject for our admiration. For one, the designer Wilhelm Kåge, brought a bespoken Japanese exhibition to NK in the early 20th century. During the 50’s and 60’s the modernistic Scandinavian Design activists partnered with several Japanese designers, in ceramics, furniture, glass. Usually we think of Japan with zen gardens, the minimalistic style, refined care for details, and our mutual love for nature and quality materials. Our shared shyness, less is more, and lagom, just enough. All this is true and remains, but today there is also a contemporary wave of attraction.

The young Swedish generations have grown up with animé and manga, and many learn Japanese. The vivid imagery, the kitch and kawaii, Japanese pop, the dressed up characters Cosplay is big in Sweden. The exotic attraction we find in the extreme and futuristic approach in Japanese literature and culture with one foot in the future and one foot left in tradition. DJ’s from Tokyo are big in Sweden. The early sushi boom in Sweden, continues in a deeper interest in Japanese food culture. The many Swedish designers and artists coming to Tokyo are in love with the street culture, the building workers’ fashion and Tokyo Hands. There is nothing like the energy of Tokyo. The constantly changing scenery and cityscape, the intensity and sense of living ahead of time. 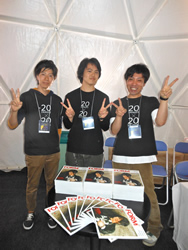 Some of these characteristics we tried to bring with us in the huge Tokyo Style in Stockholm 2004, when we used all of Stockholm, to interact with the various characteristics of the city as a magazine. 400 artists and participants came from Tokyo, in collaboration with just as many Swedes in institutions and on the streets to give the public a feeling of Tokyo wherever they went. This left long lasting marks, and new collaborations in the aftermath. Our similarities and the strong opposites attract. The flow continues, but in new lines. New generations have new tools of communications. The emotional and aesthetic attraction is still there, the hype over the design object seems to have given way for a new social engagement and strive for a more sustainable urban lifestyle.

Tokyo Style will again make a mark during the Umeå European Capital of Culture 2014. The non-profit organization, EU-Japan Fest Japan Committee are supporting Japanese Culture to come to Riga and Umeå 2014. We are looking forward to continue our warm relations.