[Vol.61] “Linz Before European Capital of Culture and After” The Case of Ars Electronica

Ogawa：In 2009 Linz was selected European Capital of Culture as a city with roots in art and technology as culture. Ars Electronica Linz, the international cultural body that played a major role in that endeavor, was formed in 1979 and this year marks 35 years of operation. Could you tell us the background and story of how Ars Electronica came about in the city of Linz? 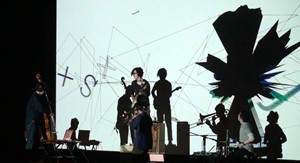 Stocker：Thirty-five years ago Linz was well-known as a city of industry and especially steelmaking, but had no prominent cultural platform. Wedged between the renowned tourist destinations of Vienna and Salzburg, Linz was in need of its own identity. The city’s strategy went like this: Advanced industrial technology → focus on computer technology → future-oriented cultural development in art, technology and society → development in the cultural lives of people living here → attract smart and creative people → such people want to make their homes in Linz.
The concept of art and technology was an easy fit for a city whose image, to begin with, was of industry that developed technology. And then in 1979 the Ars Electronica festival began as one in the midst of art, technology and society. And attracting the people of Linz by making the Klangwolke,* a unique event with community participation, a regular thing, rather than just hosting experts debating important ideas, was of tremendous importance. Involving large numbers of people as a place promoting discussion of how the insights of technology and art will change the future, and archiving this－that was the role of Ars Electronica from the very beginning.

Ogawa：Since hosting the European Capital of Culture in 2009, the creative sector in Linz has grown to 3,848 firms as of 2012, over 3.5－fold the count of 1,073 in 1995, apparently a tremendous success of the original vision. What was the secret behind this? 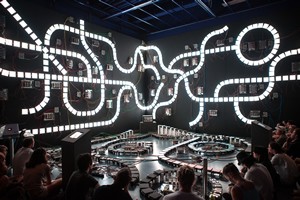 Stocker：I think the first thing to mention would be how the preparations for the European Capital of Culture program were well thought through, especially budget allocation. Rather than using the entire budget in the 2009 year of the European Capital of Culture, some was allocated to the year before in 2008 and some to the year after in 2010, and rather than disbursing the whole on projects already planned, some was set aside for new initiatives as a seed fund for the future. Also, the cultural support had a sustainable element to it. Examples of that success would include the Höhenrausch exhibit at the OK Center and also the film festival and comic festival. These began in 2009 and by this year, 2013, have become regular events. The year of the European Capital of Culture was also an occasion for Ars Electronica to perform major renovations at its center, which now draws visitors from throughout the world as an international cultural platform for media arts.
Also of great importance for the European Capital of Culture project was striking a balance between inviting art in from outside and support for ideas with local initiative. If you emphasize the former, you may have a year of great exuberance but later only memories. 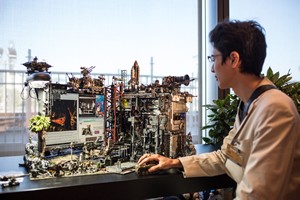 Ogawa：What results has Linz achieved with its experience as 2009 European Capital of Culture? How does Ars Electronica see its future? 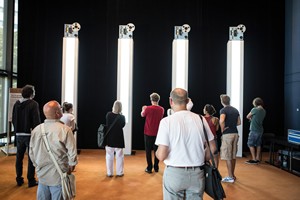 Stocker：One result that the European Capital of Culture brought to Linz may be the networking among stakeholders. Linz’s cultural institutions－its tourism and cultural managers, and its museum, concert hall and theater directors－have maintained their lateral lines of communication. This is something that was incorporated into the European Capital of Culture proposal and was part of the strategy. The hub is the deputy mayor, who oversees cultural affairs and serves as locus for discussion among the directors of cultural institutions. The experience that began at this time is functioning extremely well. For example ? and this is a project now duly underway－the officials responsible for tourism sought proposals for Christmas events in the town square from Ars Electronica and the OK Center. Normally it would run the other way (the cultural institutions would request use of the square from the city tourism office), and it is the communication I mentioned that permitted this to happen. For Ars Electronica also, the European Capital of Culture was a good experience looking to the future. It proved that the works of artists in the fields of art, science and technology curated by Ars Electronica are extremely important and effective in touching off interest in and debate on society among ordinary people. The future is always presenting us with challenges. I am confident that artists can play an important role in the development of culture and society.

* Klangwolke: An outdoor show staged along the shores of the Danube that began as part of the Ars Electronica festival. The event has drawn audiences of 100,000 since its inception in 1979 and is now an annual event. (The current population of Linz is 190,000.)