For Nagomi Kyogen Czech this year was one of tremendous good fortune. We were blessed with the valuable experience of studying for nine months with Motohiko Shigeyama, the kyogen master of the Okura school who was resident in the Czech Republic as an ambassador of culture, and performing for local audiences with professional kyogen actors. Further to our good fortune was the call from EU-Japan Fest for our Czech team to appear in two kyogen performances together with Japanese professionals at Košice, this year’s European Capital of Culture.
Here I would like to report in detail on the first of these performances. 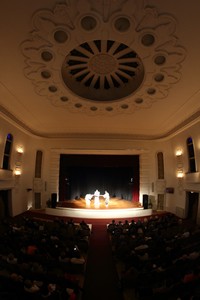 At Košice the premier kyogen piece “Buaku” was a Shigeyama family performance, Shime and Ippei along with Motohiko.
“Buaku” is an especially distinctive piece within the kyogen repertory. A kyogen performance usually lasts 20 minutes or so but “Buaku” takes over twice as long, and whereas kyogen is generally comedy, the first half of “Buaku” has no laughter at all.
As “laughless kyogen” – that is, one with a story so deep that the audience finds nothing to laugh at – “Buaku” speaks more to the depth of the kyogen form. It would be rather closer to the noh and Shakespeare’s tragedies than it is to typical kyogen.

To outline the plot, the story begins with Buaku’s master furious that his servant Buaku has not shown up for work, whereupon he calls another servant, Tarokaja, and directs him to slay Buaku. Being close friends with Buaku, Tarokaja refuses this order but is told, “If you don’t slay him, I’ll kill you myself with my bare hands.” And so he can only take down the house’s hereditary sword and set out to slay Buaku.   Thinking that a frontal assault would fail because Buaku knows of the sword, Tarokaja decides to trick Buaku by presenting him with some river fish, then while he grasps them boot him into the river from behind and strike him dead. Buaku is at first surprised and then angry that he is to be tricked and killed, but in the end he resignedly offers his neck. However, Tarokaja is unable to kill his old friend Buaku and, weeping, lets him go. He tells Buaku to flee to some other land since he will tell their master that he has done the deed. When Tarokaja returns home and tells his master he has killed Buaku, the master is pleased and in fine mettle sets out for an excursion in the mountains east of Kyoto.
Meanwhile, since he could never make the visit again once he had gone to some other land, Buaku makes a last, farewell visit to the shrines of those mountains, where he runs into his master. “It’s Buaku,” exclaims the master in alarm, and Tarokaja explains it away by saying, “No mistake but I slew him, it may be Buaku’s ghost that we saw.” Going stealthily to where Buaku has hidden himself, Tarokaja finds him and instructs him how to appear in the guise of a ghost. 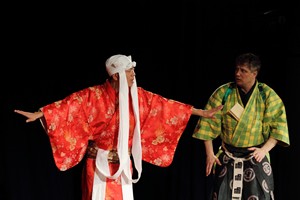 Taking sudden fright at the mention of a ghost, the master nervously sets out on the way back, but once more Buaku’s “ghost” appears before him. His master stricken with terror, Buaku speaks of meeting his father the late lord in the other world, and his forlorn master bursts into tears. When Buaku tells his master that he has come to borrow his sword on behalf of his late father, the master gladly hands over the sword and a folding fan. Gaining confidence, Buaku further explains that he has been appointed to escort the master as well to the other world, and all exit in pursuit of the master, who flees in dread.

Kyogen is in general a comedic form. However, “Buaku”, a standout among its standout pieces, is, like “Tsurugitsune” and “Hanago”, no mere comedy. These are psychological dramas that touch on the very deepest parts of the human heart.

In “Buaku”, for example, the master puts to Buaku as “ghost” questions that trouble every human being, that no one can answer. “Buaku,” he calls, “are there really a hell and a heaven?” In Buddhism, in Islam, in Christianity, in all the religions, only one thing is certain: “All who are born one day shall die.” On the other hand, none of us know “what happens after we die”. It may perhaps be the very essence of kyogen that “Buaku” depicts such profound themes as “comedy” in extremely concise fashion.
It is pleasant and comfortable to construe kyogen as comedy. When we consider how every one of its pieces neatly depicts our human frailties, duplicities, blunderings, our humanity, kyogen becomes inexhaustibly interesting. 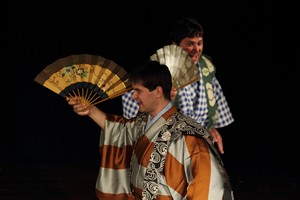 The “comical kyogen” that we have played in the Czech Republic is well-received by audiences, and Tarokaja has gradually become a popular character. But to let people know that there’s more to kyogen than that, we have been wishing for Czech audiences to once see “Buaku” with an outstanding cast. And we have now played “Buaku” at the national theater in Košice with the best cast imaginable, the members of the Shime Shigeyama family, notwithstanding concerns over the condition of Shime’s father, Japanese national treasure Sensaku Shigeyama, who passed away in May. It was two brothers who played the scene in which Buaku, seated onstage, calls out to Tarokaja, about to slay him, “Strike as it pleases you.” Could anyone, of whatever nationality, watch this without goosebumps? It was enthralled by the harmonies unfolding onstage that I myself fed the subtitles. It was a moment, but rarely seen in the European theater, that actors and audience became one.
What follows after that scene is the “kyogen-like”, comical “Buaku” that continues to a comedic ending, but the audience until the end waxed with an “unlaughing tranquility”, rising as one in explosive applause filling the silent space just as the actors took their leave.

On March 3 at the national theater in Košice, one of my dreams came true.