HOME > Column > On Taking Part in “Days of Poetry and Wine”

Universality is what I seek in my poetry. People may wonder what I mean by that: simply put, I would like for my poetry to be read, to be readable, a hundred and a thousand years from now.
Yes, it’s an outsized ambition. But since it was the effect on me as a reader of poems from a hundred and more years ago that made me want to write poetry, it was only natural that I would want to create poetry that could stand along what I had read myself, that would in its turn inspire other people to write poetry themselves. I even hope that works written “here in Japan now” will develop a broader readership, transcending “here in Japan now”, transcending time and transcending place. 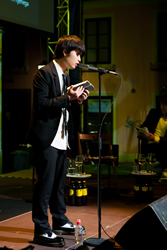 So how do things stand?
I’ve published two volumes of poetry and sometimes hear from readers how they feel about them, but that tells us nothing about how things will be a hundred years from now. As for transcending the place we call Japan, since my poetry collections are in Japanese and from a Japanese publisher, I couldn’t even imagine how they might spread more widely.

And so things stood when it was suggested to me that I give a poetry reading at a Slovenian festival called “Festival Dnevi Poezije in Vina” (Days of Poetry and Wine). I accepted despite certain misgivings: it would be my first time overseas, no one would be coming with me, I speak hardly any English, and there would be no interpreter I could count on. Stronger than my misgivings was the desire to read my poetry, and have my poetry read, before an entirely new audience who would know nothing either of me or of Japanese.

For the festival I had my poetry translated into Slovenian and compiled in a single pamphlet, and I gave three readings around Slovenia.
At the first two readings I first read my poems in Japanese and festival staff then gave readings of them in Slovenian. When I gave a reading in Japanese, even those in the audience who didn’t know Japanese responded to the rhythm of my Japanese accompanied by music. The second time in particular the music didn’t play properly because of equipment trouble, so that second audience had only the rhythm of my speech to respond to. Then the Slovenian reading followed my own reading. My poetry transformed into sounds that I had never heard before. But it was without question my poetry. I was reminded of resonances concealed within my poems. In a complete switch from how they had first listened in response to the rhythm, the audience now listened quietly mulling over the sense of the words. I know no Slovenian. The audience knew no Japanese. Mediated by my poetry, each of our “understanding” and “non-understanding” reverberated together. 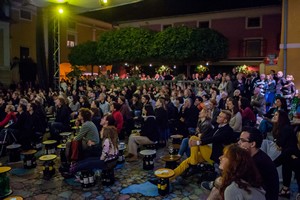 My last reading took place on the main stage, where translations of the poems ran on the screen as I gave the reading myself. The audience could catch the rhythm from my voice and also read the meaning of the text on the screen. Divided between voice and text, meaning and rhythm, my poetry mixed together again within time. This unfamiliar style of reading caused a commotion among the audience that before long turned to applause.
The audiences here know nothing about me. And precisely because they know nothing about me, they respond directly to my speech. This direct response gave me such a kick as I may not have felt since when I began writing poetry. The Slovenian audiences and I shared the anxiety and excitement of not knowing what lay ahead. We shared a space that was genial and yet replete with the expectant thrill and tension of what would happen next. This is it. This is the thrill. This is what I wanted.

Backstage, though I know hardly any English at all, I was able to make a few friends by using body language and the few English words I do know. Since I am basically leery of people, I wonder whether we would have hit it off so well in a situation where we shared a language. It may be that the use of body language brought out my hidden affability. 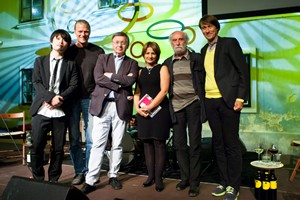 Taking part in this festival as one who speaks Japanese in Japan and there writes poetry in Japanese, I saw before my very eyes how language transforms as my Japanese poetry became Slovenian text, took on Slovenian resonance, took on its sound and its meaning, but how the kernel of a poem communicates even when the form of the language changes. And using body language to socialize taught me firsthand that there is language without the form of words. At the same time I realized how invaluable it is to be able to speak Japanese without a second thought. Each language has its own resonances. And the kernel of a poem will be sure to get across, even if its resonance and form change, so long as it is delivered surely. This is what makes the resonance specific to a language all the more precious.

For one in pursuit of universal language, this festival gave me an opportunity to take another hard look at the basics of language. I will surely continue writing my new poems in new ways. When I get lost, however, I will be able to start anew by remembering the impulse I had when I first began to write poetry and the excitement I experienced at this festival.
I hope that I will find a way to work so that, whether I write my new work in Japan or overseas, I meet as many new people as I can.

Photos are taken at the “Days of Poetry and Wine2013” in Ptuj, Slovenia