The 21st EU-Japan Fest Program
Use the City Festival: Bonsai Exhibition and Demonstration

Like “sushi” and “judo”, “bonsai” is another Japanese word that has come into global usage. When you ask people outside Japan whether they know bonsai, you are liable to find that many have a ready grasp of the form, replying “tiny trees” or “works of art” or the like. 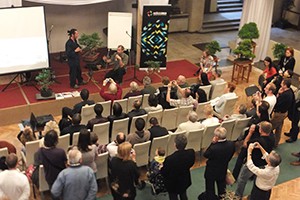 Bonsai arrived in Japan from China in the 12th century, around the end of the Heian period, and found favor among the nobility and the samurai class. From their depiction in picture scrolls, such as those found in the 1309 “The Miracles of the Kasuga Deity” and the 1351 biography of the Buddhist monk Kakunyo, we have an understanding of how they were enjoyed at the time. Towards the end of the Edo period in the mid-19th century, they also appear in ukiyoe prints and, enjoying broad appeal in all parts of society from the aristocracy to the common people, have since developed through times of hardship and prosperity alike. Their appearance at the 1937 Paris Exposition is reckoned to be when bonsai became known overseas. After the Second World War bonsai gained further visibility as gifts made overseas and through their appearance in high-profile overseas magazines and in exhibitions at the 1964 Tokyo Olympics and the 1970 Osaka Expo. 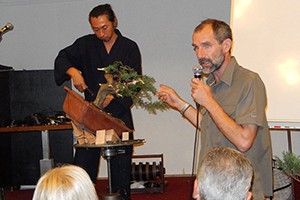 With each year more and more people take a keener interest in bonsai in the West, where they are known as miniature trees and an art form, and some professional bonsai cultivators have received technical training from Japanese practitioners. While Japan is their lodestar, in interaction across national boundaries their development continues to be remarkable through honing their technique and showing their work in exhibitions large and small.
Slovakia began taking to bonsai during 1980-85, and there are around a thousand fans of the form from children to adults. The Bonsai Slovakia composite event held annually in April and featuring primarily bonsai is said to draw an astonishing 40,000 visitors.
It was against this background that our bonsai program attracted such interest among so many Slovakians, and not only bonsai fans.

At European Capital of Culture Košice 2013 I had charge of the bonsai program over May 24-28. My actual stay was for three days. As well as demonstrating technique and expression, I engaged in the project with a view to continuing the exchange on a sustained basis. 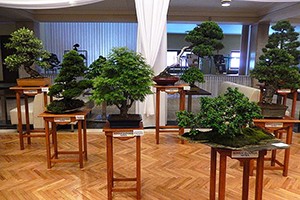 I arrived at Košice airport at 14:00 on the 24th. After checking in at my hotel, right away I called on Mr. Roskos, an ardent bonsai enthusiast who lives an hour or so from Košice by car. One of Slovakia’s leading bonsai aficionados, he would be showing a number of pieces in our exhibit and has over a hundred bonsai in his home. Taking evident pleasure in his lovingly cultivated bonsai, his words to this visitor from Japan bespoke the spiritual richness of the days he spent with his plants.

There is something to admire in the understanding one finds overseas inside the home for the adoption of bonsai as a hobby. That bonsai might be a selfish pastime is never suggested. Though bonsai are living creatures, you can’t take them out with you like pet animals. Since they need daily supervision and care, one hears from Japanese bonsai buffs what trouble it is to win their families’ understanding and cooperation. “I’m unable to travel,” they say, or “I can’t trust my family with watering the plants.”Overseas the bonsai are a source of conversation within the family, and something that sparks intercourse with other bonsai-loving families. While I can’t actually tell whether doing what you enjoy lets you give your family double the love, it does inspire considerable envy and must be one factor behind the increase in bonsai aficionados. 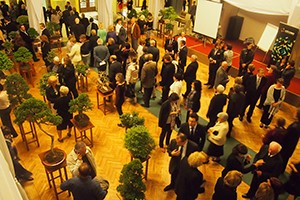 Bonsai exhibition at the House of Art

At 8:00 on the morning of the 25th we started work on the hall exhibition. We would be showing around 70 pieces. Of these, three Bonsai by Slovakian President Ivan Gašparovič would occupy pride of place. It is tremendously welcome and a great honor for Japanese that the leader of a foreign country loves bonsai. We would show bonsai on the first floor through to the third; some pieces were mounted on a stand as they are when displayed in Japan. As well as indigenous species, the exhibition included some imports. Many were familiar to Japanese such as maple, gingko, red pine and white pine. Japan exports 30,000 such plants annually according to 2009 figures, and that many of these are shipped to Europe indicates how the Japanese bonsai has become an article of great aspiration. 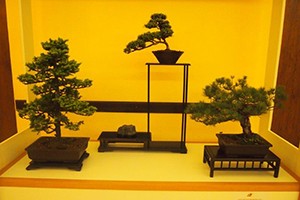 On the 26th I gave my demonstration. There were three bonsai that I had ready to use, and the one I selected was a juniper harvested in Slovakia. Since there was less time for the demonstration than I had anticipated, I pruned it ahead of time to remove branches other than the main ones that would be removed during the demonstration and dead branches that hadn’t been pre-cleared. For interpreting and assistance in the demonstration I had the help of Mr. and Mrs. Ondejcik, who since 1988 have operated Bonsai Studio Nitra, the first bonsai specialty store in Slovakia. Taking questions as we went, I proceeded to explain how to view bonsai, how to create them and other aspects of the craft. From the depth of their knowledge of bonsai and the mood among the audience, I could tell that the Slovakian was an accurate rendition of my commentary. Working from the plant’s starting condition towards the condensed beauty of a finished bonsai, I gave the work its form pruning over half of the unneeded branches, sculpting the cut thick branches into jin (the white, skeletal deadwood portions), and using wire to guide branches where they needed to go. This is work that bonsai fans will appreciate, but to visitors watching the process of bonsai creation for the first time it may have seemed as though I was abusing the plant. My job was to inform viewers clearly how the tree transforms into a bonsai that will please the eye beyond any human lifetime, how it should move its viewers as a living piece of art and how its future care and management will of course be important. There is some difficulty in using a living creature in a demonstration that draws such a large crowd, not all of whom are bonsai aficionados. 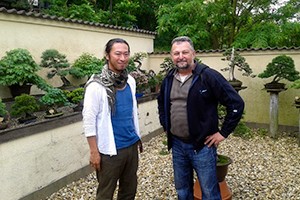 As I noted at the outset, the word “bonsai” is now in use and bonsai themselves enjoyed throughout the world. Currently it is Japan that is reckoned the summit of the form and considered to lead the world not only in technique, but also in the number of outstanding pieces produced. It is entirely possible; however, that in the distant future some other country will emerge that overtakes Japan in terms of both technique and output. This is the trial always undergone by aspects of culture that make their way overseas; on the other hand, it may well be taken as evidence of true citizenship in the world.

The bonsai form has been nurtured in Japan over many long years, and this is why we must think through how we are to continue to spread it throughout the world, a process that requires the coordination of artisans, researchers and other disciplines alike. Offering a forum for such discussion and involving young internet users in Japan’s greying bonsai world may be among the ways that we can connect with the world. There is no questioning the fact that bonsai has become a medium of cultural exchange, and this impels me to give form, one by one, to what the Japanese must now do in this regard.