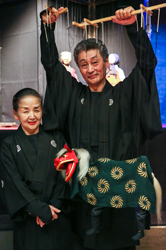 It was the autumn of the year before last, about half a year on from the Tohoku earthquake and tsunami, that the email arrived from Mojca Redjko, director of the Puppet Theatre Maribor. She said they wished to invite me as a cultural ambassador to European Capital of Culture Maribor 2012, and at the time we had no idea what a European Capital of Culture was. Mojca said that she had been to Japan that summer and seen us perform at the Iida Puppet Festa.

Forty minutes by car from the airport in Graz, Austria, we arrived in Maribor, Slovenia’s second city, going on midnight. The streets were almost empty and the city was asleep.
Proximity to Austria means that the city of Maribor conducts a lively trade with Western Europe, providing it a strong economic foundation, but the Greek crisis has dealt it a serious blow and I heard that many of its companies had folded. Walking through town, however, I felt nothing of a dispirited atmosphere. 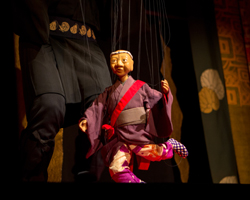 Puppet Theatre Maribor, where we were to play, is located in a former monastery, built in the Middle Ages but disused for the past half-century or so, that was renovated as a puppet theater as part of the city’s redevelopment plan. That work was still ongoing in places, but the new technology lavished on it makes the theater both an old and a new one.

Thursday morning, the next day, we arrived at the theater at 10:00. We thought we would meet the staff and have a meeting before setting up, but no one had arrived yet. When I asked to take a look at the hall, I found it was a very small one seating around sixty. An email that came from Mojca before we’d left Japan said that tickets for our first performance Friday were all sold out and we may have been a bit carried away, but now the very tininess of the place left us slightly discouraged. Though everyone would find the puppets very easy to see. 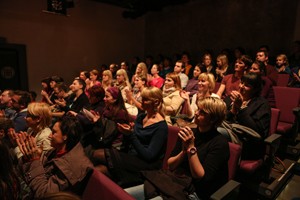 The stage was a knockdown able to accommodate different kinds of puppetry. One section was up when we got there, with sufficient width and depth but not enough height. It seemed that a second section added to it would give just the right height. When the theater staff started showing up, at first they said it couldn’t be done, but when their number grew to four or five as they arrived one by one and I thought perhaps they had talked it out, they brought in another section just like it and we got our wish. And then we barely had time to introduce ourselves before we started in on setting up.
I asked about a lunch break when it was going on noon, but they said they had something to do at another place at 15:00 and they had eaten earlier so they didn’t need a break. Unthinkable at our previous overseas performances. As it turned out, it was 15:00 before we ate lunch.
The two theater staff who looked after were tireless. They worked cheerfully, not once grimacing at painstaking instructions on sound or lighting, or requests about how to hang the curtain. Thanks to them, the stage looked lovely and we discovered a new way to set up the lights. And they showed us that Slovenians are very hard-working people.
After lunch, Petel and I talked about interpreting in some detail, and this worked out quite well. 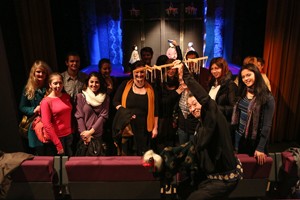 On our first performance date we arrived at 10:00 a.m. We finished up work, rehearsed and checked our cues.
Then at 18:00 it was time to go on.
When we play for the first time for audiences in a new country, I like to use their language to introduce the show so they will feel readier, if only a little, to relate to the performance. In Maribor, too, I paid a visit to the governmental tourist bureau and learned a few phrases, but they told me, “It’s very difficult, so we think it would be better to use an interpreter from the start.” With difficulty I somehow managed to learn the phrases. And maybe it was worth the effort, because the audience was very relaxed.
We performed four pieces: the male dance “Kappore”, “Yoidore” (A Drunkard), the female dance “Kurogami” (Black Hair) and “Shishimai” (Lion Dance). In the intervals we included some commentary on the puppets through our interpreter and left nothing out in describing the features and appeal of Japan’s unique marionettes. There were some small children in the audience, but the audience was focused on the stage and responded profusely to the gestures of the puppets.
In Japan part of seeing the audience home is having our lion puppet bite each one on the head for good luck, but religious considerations sometimes forbid this so we consulted Petel. He said it’s a Catholic country but suggested explaining that “many Japanese believe that the bite of the lion perks you up” and so the lion bit each and every audience member. When we’d finished up, Mojca had a very satisfied look on her face. The performance was a great success. 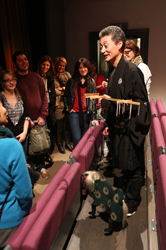 The next day, Saturday, we played twice, at 10:00 and 18:00. I thought that the earlier performance would be all children, but there were quite a few adults.

The total audience for all three shows was 165. Some even came from Graz and other places outside Maribor. Children would have been about one-third of the total. As Mojca had it, “The children were thrilled. They probably didn’t understand the meaning or content of the pieces played, but they had an experience of appreciating something even if you don’t understand it.”

Tuesday we put on a workshop at 10:00. We started with 11 of us altogether, including four new puppeteers from the puppet theater in Ljubljana. After playing the same four pieces for people who’d been unable to attend the show, we gave a technical description of the features of the puppets and put them in people’s hands. There were a few questions, and as well as asking about the operation of the puppets, some attendees asked in depth even about succession practices. And some took detailed photos of the body and other components, so our puppets may someday give rise to new puppet offspring.

As soon as we had returned to Japan, an inquiry arrived from a Turkish puppet festival. Mojca had put them onto us. Unfortunately our schedule clashed, but it was the sort of circulation that resulted from the Maribor trip.