HOME > Column > Media Art and Culture: What It Takes to Live in the Information Society

[Vol.54] Media Art and Culture: What It Takes to Live in the Information Society

A cultural organization based in Linz, Austria, we held the Impuls & Bewegung show at the Volkswagen Automobil Forum in Berlin in July and our regular Ars Electronica festival in Linz in September.

The word Bewegung in the title of the Berlin show means motion, movement. How is an individual to live without loss of privacy amidst our many regulations and social conventions? For one thing, I think it is important to keep moving. This means keeping courage, staying open to change and maintaining an attitude of curiosity. 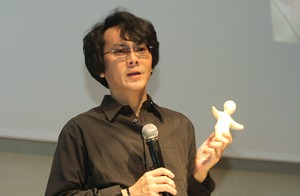 Prof. Ishiguro at the symposium

Confronted with issues or restrictions regarding what one has been seeking to do, one considers what is of most importance and what other ways there are to achieve it. This ability resembles that of a child finding ways to play. Children are not instructed in ways of playing, but in new places and with all places and things they observe, find new meanings and devise new games, and they do so with enthusiasm. What we require now is the capability to create new codes to interpret the challenges and themes that we face. Precisely because we live in an ever-changing world, the past offers no solutions. 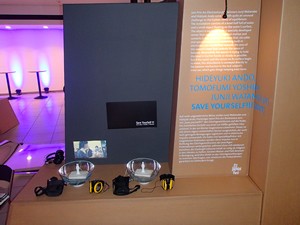 The Impuls & Bewegung show was comprised of works informing us about our body and works informing us about space. As an example of the former, “Save Yourself!!!” allows one to experience the sensation that one’s sense of balance is being “manipulated” by means of simple electrical stimuli received through electrodes attached to one’s temples. “Acoustic Octahedral Geometry” describes (invisible) structures sensed by ear by means of highly directional speakers installed in a space. With the mere replacement of one person’s visual and auditory sensations with another’s, “Inter-Discommunication Machine” allows one to sample sensations one has never experienced. Though these are all these components of our selves, a simple change in how they are used leaves one unable even to walk properly. Works like these use our own bodies to question what we believe to be “normal”

Of the works informing us about space, I would like first to mention “Particles”. A simple piece, it indicates that our world is not two-dimensional, but three-dimensional. The world that envelops us is always three-dimensional (or at least we perceive it as such) and continuously in motion. The installation’s small balls each transmit their positional information continuously, receive luminous signals continuously and react individually, but the result is a harmony generated overall and the creation of new rules and beauty. While “The Tenth Sentiment” is comprised entirely of things we know from our routine experience (an N-gage model train, LED lights, clothespins, laundry baskets, light bulbs and the like), it foments an overwhelmingly poetic world. These elements alone are involved, yet the human heart interprets them as poetic. Our objective was for visitors, encountering these various “interpretations”, to take these experiences away with them. Installing so many experimental works in a public space was a challenge, but we received positive feedback from a great many people.

The theme of the Ars Electronica festival this year is The Big Picture. This brings us to the topic of how people, acting individually and on their own initiative, and given an era in which even political shifts are unmediated by a centralized approach, sum up “the world we are living in now”. And so one approach that we took for this exhibit was to join up “individual new perspectives” like a patchwork and reveal “the big picture”. 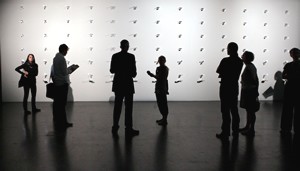 “Desire of Codes” by Seiko Mikami

This year we showed “The Desire of Codes” by Seiko Mikami as a featured artist. A work on the themes of the body and contemporary information society surrounded by surveillance cameras, the piece combines a keen sense of beauty, concepts acutely depicting the contemporary world, and expressivity. While showing Japanese technology employing robot arms and servomotors, the work operates sometimes with grace and sometimes with a complexity beyond human perception, offering “perspectives” with which many people around the world currently living could find sympathy. 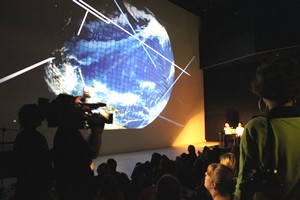 This year we initiated a collaboration with the National Museum of Emerging Science and Innovation (Miraikan) in Japan with a focus on its flagship exhibition Geo-Cosmos, and this is also very important for us. A museum whose themes are science and technology, and sometimes art, Miraikan takes an approach resembling that of Ars Electronica in presenting the world as a way of learning about the local community and country in a local institution. When seeking to learn about the culture of my own country, I seem to have the experience of finding the distinctive aspects of my own country’s culture ultimately gaining prominence when I learn about another country. At the Big Picture symposium and Deep Space we had them speak about AuthaGraph, the new approach to cartography employed in implementing their Geo-Cosmos platform.

This year’s Ars Electronica festival also featured award-winning works from the Ministry of Culture’s Japan Media Arts Festival. What made them a particular selection from among last year’s award winners was the response and expression of Japanese artists working on the theme of the March 11 disasters. Our world is a connected one. The exhibition brought home to us that we are not spectators, but none other than individuals living together on the Earth.

Hiroshi Ishiguro took part in the symposium this year as well. As a “hybrid” science always probing new veins of research rather than established fields alone, his may be reckoned a new perspective on research.

Fujiki’s work is an ironic and fun expression of the zeitgeist and the world of gaming, and was an award winner especially well regarded by the international judges.
Namekawa’s piano and the visualization by a Turkish artist made for a new form of performance transcending cultures.

The Amanogawa, or Milky Way, project is a wonderful work consisting of floating 50,000 LED balls on the Danube, an international river passing through many countries, that won the interest of communities on its shores as well as of people with an interest in art. Permissions from the Austrian authorities were unfortunately not forthcoming, and the plans for their release had to be cancelled. We hope that Europe will someday see their endeavor made reality in an expression of the background of the river that we look out on daily.

It is not the role of Ars Electronica to produce answers, rather to emit messages in the form of questions for exhibition visitors to take away with them. As an important piece of expressing these messages, we consider it a tremendous honor to be able to introduce the work of Japanese artists with their own original perspectives, and we hope to continue to explore relationships of mutual stimulus.