Fashion is art. It is a way to show creativity, diversity and quality. It is timeless.

These words almost radiated from a Slovenian summer art event called Project RADAR which united numerous Slovenian and foreign designers from the world of fashion design, videography, photography and literature. 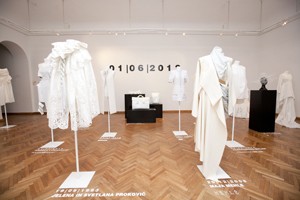 The main artistic idea of the event was to present and enjoy what could almost be termed “rebellious designs” – individual interpretations of fashion and art that are not committed or limited to a single trend or season. While the world of fashion design is always orientated towards or dictated by a “seasonal regime”, this time, designers and artists tried to overtake that determinism and present something season-less and that was exactly what connected three different rooms for three days in a small Slovenian town called Maribor. It started with an “all white” exhibition of Slovenian fashion designers – where lack of color variation was replaced with focus on shape and texture – to continue onto photo exhibitions and video screenings, and to finish with fashion performances, lectures and round tables. The entire weekend was packed with innovation and creativity.

One of the fashion designers who probably inspired visitors and colleagues the most with his work, his life story and his vibrant personality, was Koji Tatsuno (born in Japan and living in Paris). Anyone who has ever had a chance to meet him would agree with me, but Tatsuno is incredibly “down to earth” for a man who has experienced such a long and exciting fashion career and life journey. Or maybe it is precisely because of this that he somehow manages to remain calm and exciting at the same time – an attitude also reflected in his designs. 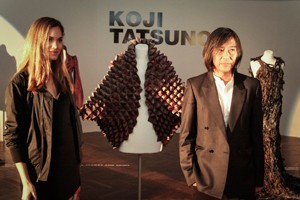 I first saw his creations when I arrived in Maribor in order to help set up exhibition Radar, and I was immediately impressed by his designs or rather his artwork. All the pieces were unique with their own story, technique and material. Nevertheless, they all had one thing in common – a sense of effortlessness with which they were made. Each design worked as an entity of its own which, in my opinion, is one of the hardest challenges set up for a fashion designer. This is only done by a few brilliant minds in the world and Tatsuno (maybe that is where his Japanese roots are seen and felt the most) happens to be one of them.

In an interview held at one of the round tables as part of the event Project Radar, Tatsuno expressed extremely strong attitudes toward “high fashion” and “Haute couture”, saying its only purpose today is selling branded fragrances and pleasing luxurious red carpet enthusiasts. This attitude is clearly represented in his designs that are dated as far back as the early 90’s but still have a modern and sort of an avant-garde feel to them – an effect which is surely accomplished only with a fine mixture of traditional craft and modern technology. In this manner, Tatsuno proves us the ultimate truth; if a piece of clothing has a strong point of view, it inevitably becomes art. Art in turn is everlasting, thus timeless in character. 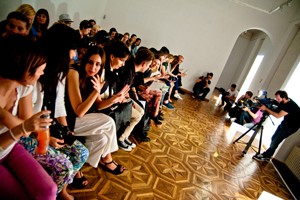 At the end of the interview, Tatsuno spent a few minutes talking about us – a new, young generation of fashion designers – saying that he believes the time has come for us to create our own rules and ambitions. He emphasized how important it is for a designer and an artist to surround him/herself with creative and innovative people, colleagues and friends. And so we did; from exhibitions and lectures to after parties and late night walks to hotels, the entire weekend was bursting with a spirit of sharing and exchanging ideas and thoughts.

Maybe in a weird sense, that was exactly what brought me even closer to Tatsuno. He spent a lot of time and energy (especially in the 80’s) playing an active part of the art and fashion community, spending time and energy, collaborating, communicating and exchanging with known and unknown artists of that time. Knowing this made me realize how important socializing is and how much I appreciate opportunities that lie in events like Project RADAR. 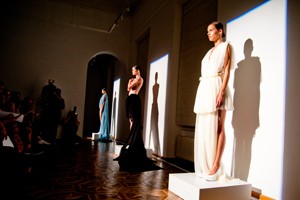 Although it was perhaps not a fundamental part of the underlying agenda of the event, anyone present would have felt that the essence of the entire weekend was about getting together with friends and colleagues from different parts of Slovenia and the world. Teams from EPK (Maribor 2012: European Capital of Culture), Project27, and EU-Japan Fest collaborated to create something creative and new, to present it to the media and to a wider audience, and get a thrill out of it!