HOME > Column > Thanks for the Emotions

[Vol.49] Thanks for the Emotions

It’s when everyone there became one through dance. Within myself, I was brimming with an inexpressible sense of satisfaction and happiness. “Good that we did this.” It was a beautiful moment. 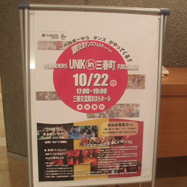 11 March 2011, 2:46 p.m. An earthquake of 9.0 magnitude struck the Pacific coast of the Tohoku region. As one person living here in Fukushima, I asked myself whether there was anything I could do. Towards the end of the month I began helping out people from the village of Katsurao, the entire population of which had evacuated to the neighboring town of Yanaizu due to the nuclear power plant crisis. I helped out with an art class for children and in support of a community concert by Curt & Bruce, a duo of Japan-resident Americans who play koto and shakuhachi. To open for them I put together an Akabeko Dance group combining primary school children from Katsurao with a yosakoi traditional festival dance team of Yanaizu children for an event facilitating exchange between the two communities. At the “Yanaizu-Katsurao Heart Get-Together Exhibit” we showed haiku, illustrated messages and other submissions reflecting on the circumstances of evacuation and expressing gratitude to Yanaizu. These activities on behalf of Katsurao villagers went on until the entire village again relocated to temporary housing thrown up for them in the town of Miharu in August. 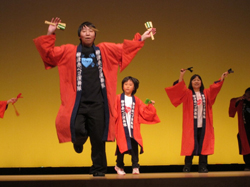 Just at that time Yumiko Endo of the publisher Okuaizu Syobou reached out to me and I found myself coordinating the UNIK dance performance. Talking it over with Shuji Kogi of EU-Japan Fest and Bernard Catrysse of the Flanders Center, my work on behalf of Katsurao led me to propose holding the event in Miharu with the idea of taking the Akabeko group to Miharu to dance together with people from Katsurao and Miharu. With the performance planned just two months off in mid-October and in Miharu where I had neither acquaintances nor connections, I wondered whether we could pull it off in such a short time. Even in the grip of my anxiety, I was bubbling with enthusiasm for putting on a dance performance that would be worth the challenge.

It was the very day of the performance that I first met the four UNIK members, world-class dancers who had traveled from Belgium, a world center of dance, and they were every one unique individuals and splendid women. Arriving at the venue, they had a simple rehearsal just before start time. I had butterflies thinking how the performance would turn out. And then UNIK took the stage and launched into a marvelous performance of dance. Their professional execution was casual and beautiful. The audience was charmed by the beautiful dance of the first foreign women they had ever seen. The hall then broke into warm applause for the homely and hard-working festival dance performance by the ten members of Akabeko from Yanaizu and the second-year primary school children from Katsurao. We then finished up with the main event of the UNIK dance workshop. Audience members who had been watching from their seats now joined in to enjoy dance with all taking part. Expertly led by the UNIK dancers, everyone from children to the elderly joined in the dance and the floor was packed with people. When the performance began, I thought the audience was a bit small but it was all for the better. It’s when everyone there became one through dance. Within myself, I was brimming with an inexpressible sense of satisfaction and happiness. People from Miharu, from Katsurao, from Yanaizu all danced together smiling and perspiring. “Good that we did this.” It was a beautiful moment. 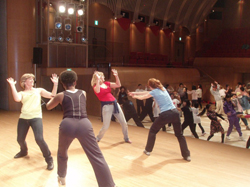 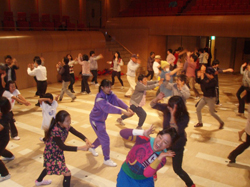 The next day we paid a dance visit to the Katsurao/Tomioka temporary housing site, using an assembly room for our performance space. With us were Mr. Catrysse, the UNIK dancers, Yasuhiro Watanabe from Miharu, dancers from the city of Koriyama who had come in moral support the day before, dance instructor Michiko Kano, and high school student Kotomi Yaegashi. Many evacuees from the disaster zone took part and danced with smiling faces. As we left, they spoke to us warmly. “Thank you for coming.” Looking at the temporary housing site, I felt all manner of emotions. For all of us, it was a valuable experience. 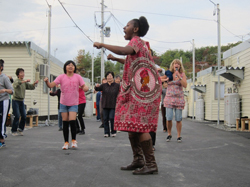 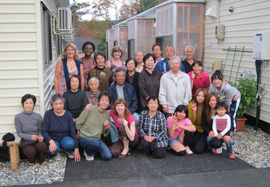 On November 5 I met again with Mr. Catrysse and Mr. Kogi in the town of Mishima. We met at the temple Sairyuji, the home of Yumiko Endo, who manages the publisher Okuaizu Syobou, in the Nishikata section of Mishima where the renowned Belgian guitarist Jan Depreter played a “Concert of Requiem and Prayer”. The temple where we met displayed the work “Hanamai” that was shown in the exhibition of art held by Okuaizu to encourage the city of Minami Soma. It sprang from a wish to render pictorially the hue of Jan’s guitar requiem as a gift to Minami Soma. It was a place of comfort reverberating with intense, limpid prayers. That night was a dinner party with congenial comrades who had been involved with this series of events. Jan’s guitar performance and Ms. Endo’s wonderful cooking made it a pleasant time. 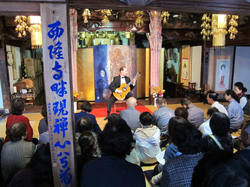 The evacuee support work that I began in March continues to grow, the circle expanding to include a great many people. “Let’s do what we can, when we can, and as much of it as we can do.” Also, “What you can’t do on your own, call on friends for help and accomplish with new connections.”

The dance performances by UNIK of Belgium provided me a special experience. These two months were, I think, the most meaningful time of my life. I have heartfelt gratitude for the many people who assisted to bring about these dance performances.

Thank you for the emotions. And now let us work together to build a strong future.