HOME > Column > With the UNIK Tour

By chance it was at the time of the natural disasters of this March, just when I was nearing several personal turning points of my own, that I had the good fortune to be approached about joining the UNIK tour. At this point I knew absolutely nothing about UNIK, however, and it was with hardly any information on what sort of people and what sort of dance were involved that I took up the invitation. 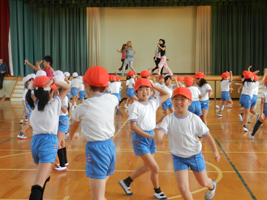 Day one was the first I met the other participants, in a Tokyo University of the Arts gym, followed by a practice session. The routine we learned was a simple one, but the sort of dance that oddly enough brought a smile to my face. The sensation seemed rather like the joy of re-experiencing the time when dance was for me a simple pleasure. I would see later that this is the very appeal of UNIK dance. Dance is not some special thing, it’s something we are all born with. Here was a force that awakes the “dance” that lies dormant in each one of us. And at this time I too sensed this mysterious dance. 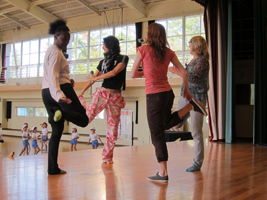 At the dance workshops we held two days later at Sendai Shiromaru Elementary School and the Miyagi Prefecture Rifu High School, that UNIK magic brought the children heartfelt pleasure in dance. And the teachers too, of course.

My role in the workshops was to provide interpretation as well as a model of the dance routine, in addition to which I took some photographs for myself, and I think that I succeeded in capturing so many splendid smiling children’s faces is evidence of the heartfelt pleasure they took in dance.
At Shiromaru we joined the students for lunch as well as offering the workshop, and I was moved by the exchanges this made possible and by my first taste of a school lunch in several decades. Actually, it may not have been the flavors, but how I was reminded of wonderful times together with my own schoolmates.
The sight of everyone seeing us off waving and waving from the window of their school building as we left that day remains with me as a deep impression. 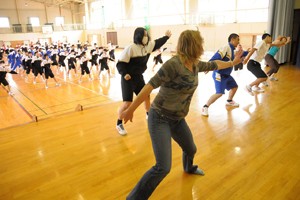 Also in Sendai we held a dance workshop for assembled members of the general public. No rules applied. Participants with experience of dance and those without likewise enjoyed their own way of dancing. This is the UNIK way.
We offered lectures on contemporary dance and on African dance, and then held a dance session together with the participants. Some were at first too shy to take part, but by the end they too joined in our interactive dance exchange. After the workshop we held a social gathering and talked late into the night. It was an opportunity for me to talk about all sorts of things with new acquaintances among dancers from Sendai.

On the final day we headed for my own home ground of Yamagata. About 250 people in all, counting both participants and observers, attended the event. It was a tremendous pleasure to have this opportunity to showcase Yamagata dance teams, offer a UNIK dance workshop and bring my own students to re-experience the joy of dancing. I was also able to present my own work to everyone involved with UNIK.

It was with great reluctance that I finally took leave of UNIK, and I only hope that we will meet again someday. 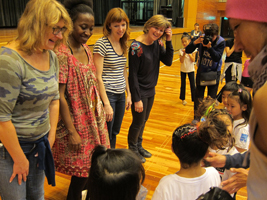 Though a very short four days, it was a trip rich in substance that made fresh for me a variety of sentiments.

How many people will one encounter in the course of a human lifetime? By happenstance or by necessity? And who then introduce one to other people that would otherwise remain unknown? Everyone with UNIK, the Flanders Center and the EU-Japan Fest Japan Committee, the elementary and high school students, and the people of Sendai and Yamagata. The wonder of so many people appearing before my eyes who were not previously part of my world. No, perhaps it’s not that they were not part of my world, but as it goes with “six degrees of separation” that I simply didn’t know about them. And it was thanks to these people that I gained a new awareness of dance.

What, to us, is “dance”?
What does it mean and how does it confront us?
It has always been with such questions that I have engaged with dance.

UNIK dance is thoroughly of the latter sort. They believe that dance enriches our daily and personal lives, and that is what they practice. And the evidence that they are right is in the moment one sees the expressions of people dancing together in their workshops. 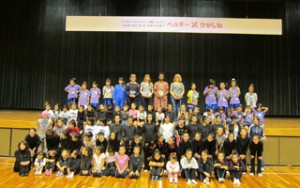 The earthquake and tsunami of March left the Tohoku region shattered. When I saw the smiling faces of these children, however, I realized that there was no longer any need to worry. Within these children with their bright, shining faces lay “dance” in its broad sense. Not “dance” in its narrow meaning, but in a broader meaning: to put it another way, they were pulsing with life.

The two sorts of dance. It seems I have always been torn between them. And it seems to me that I have now found an answer. Getting close to all people and slipping into the crevices in their minds, that is how I want to dance now.

I’ve become newly aware that this is the style of dance that I should be aiming for now. I would like to conclude this report with a word of thanks to all the people who provided me this opportunity.

* Specifics of this trip are posted on my personal website. http://fukubeyoshinobu.com