HOME > Column > A Floating Path In The Forest

[Vol.46] A Floating Path In The Forest 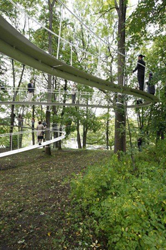 ‘As widely known, Japanese architects are now attracting international attention, partly because of the good balance between logic, technique and aesthetics that they demonstrate in their thinking,’ wrote Kamogawa Sachio in ‘Where is Architecture? Seven installations by Japanese architects’. The installation designed for the Kadriorg Park in Tallinn, Estonia, by Tetsuo Kondo Architects from Japan met these expectations with graceful ease.

LIFT11 was an urban installations festival held in the public space of Tallinn between 5 June and 22 October 2011 as an event of Tallinn – European Capital of Culture 2011. During four months in 2011, eleven site-specific works of art appeared in the city. 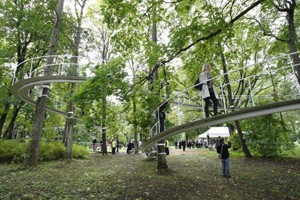 While ten works were selected in a public design contest, the eleventh installation, ‘A Path In The Forest’ by Tetsuo Kondo was made by invitation and arranged in partnership with the EU-Japan Fest Japan Committee.

Tetsuo Kondo is a Japanese architect, aged 36. Since age 24 he worked at the renowned SANAA Architects in Japan. At the age of 30 he decided on a change in career and set up his own architectural firm. He has done well: although his projects to date have been of smaller volumes, all his completed works have attracted wide international attention. His ‘Cloudscapes’, an installation made for the 2010 Venice Biennale of Architecture, was the most published work of that exhibition, and its poetry and distinctiveness were the main reason why Tetsuo Kondo was invited by the team of LIFT11 to design an installation in Tallinn. 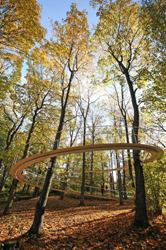 Locations for the other site-specific works of LIFT11 were selected by local artists. Tetsuo Kondo is an architect from Tokyo, and therefore Tallinn’s Kadriorg Park, created in an international design language by non-locals, became the right venue for his installation. The palace and park of Kadriorg were designed by an Italian architect, Nicola Michetti, at the request of tsar Peter the Great of Russia in the beginning of the 18th century. Michetti, although only a visitor in Tallinn, made skilful use of the locality’s particular natural character. Initially, it was the curators of LIFT11 who proposed Kadriorg Park as the prospective location for Tetsuo Kondo’s installation, but recognition between Kondo and the park was quickly apparent and the specific site in the park was selected by the author himself. The trees at the site were measured by the architects, and the installation – a walking path above the ground – was tailor-made according to these measurements. The 95 metre white metal pathway meandering between the trees was borne by a bent steel pipe, which stood by itself, only slighly leaning against the tree trunks. 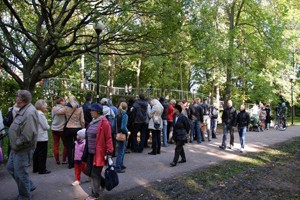 Instead of contrasting the natural with the man-made as would be quite common in the European cultural area, Tetsuo Kondo attempted the opposite: to do away with borders between the existing (nature) and the added architecture. Architects often shape a building to fit the existing trees but Kondo, as he said himself, wanted to go even further, to achieve an elegant whole of nature and architecture. This was the aspect that made the installation experimental for him. ‘We cannot change the form of the forest but we think the various elements in a forest can become one entity in this condition. I hope that we can experience a forest, architecture, and an environment which we do not know yet,’ he wrote. 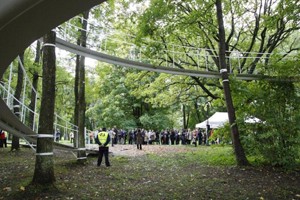 This work was site-specific by how the author read the place and took in its character and atmosphere. Estonians have a very strong mental connection with the forest and strangely enough, many of us have dreamt, in our childhood, about a path winding between the trees and making the walker feel as if he were floating. Hence Kondo managed to capture something quite characteristic of Estonians, and it would be impossible to imagine a warmer welcome than that received from the visitors of his installation.

On a wider scale, LIFT11 was aimed at breaking down prejudice towards contemporary art in public space and drawing attention to the ample array of opportunities for using the cityscape and urban fabric. During the four weeks of its existence, ‘A Path In The Forest’ enjoyed widespread media coverage and was visited by more than 30,000 people, the positive feedback indicating that the objective was truly fulfilled. Not least importantly, this was assisted by the fact that Estonians take a particular interest in Japanese culture. There were even articles in favour of having such an installation in Kadriorg permanently. 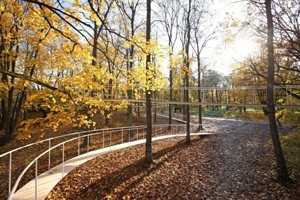 Like other works of LIFT11, ‘A Path In The Forest’ brought the audience to where one does not usually happen to be: to a walk above the ground in the midst of the trees, looking at the park and the surroundings from another angle. The installation was ready in the autumn, inviting people to perceive how nature was changing, how the trees were changing colour and eventually dropped their leaves altogether. Walking this white path was like reading a modern Japanese novel. We were asked to join in a curious and extraordinary journey, where the atmosphere was recognisably familiar and at the same time fascinatingly strange, making the border between a dream and wakefulness disappear.