HOME > Column > Installation “To the Sea”

My installation “Merele” (or “To the Sea”) was realized as an entry in the LIFT11 Urban Installations Festival. A component of the European Capital of Culture 2011 program in Tallinn, Estonia, the LIFT11 festival eyes submissions that in public spaces within Tallinn offer a spatial experience or a critical or humorous take on urban spaces through temporary site-specific installations that span the categories of art, architecture, landscaping and design. “To the Sea” was chosen in an open competition held in autumn last year. 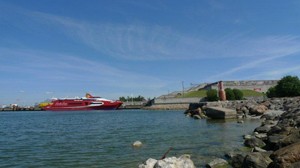 The competition guidelines left choices of installation and location up to the entrants, and I soon hit on the idea of an installation at the Linnahall. This civic hall, which I encountered soon after arriving in Estonia in the summer of 2001, has a special place in my heart that derives from the character of its architecture. Rising above the harbor just outside the Old Town, the structure seems at first to be a hill. With a configuration reminiscent of a step pyramid, it is the execution of a lucid concept. Its naming mingles the notion of both city hall and a town hall for the Old Town. On warm days a place where people gather, the building is a relic of the Soviet period plastered with graffiti and has an air of dereliction. One of my favorite places, this is where I often came to enjoy the fine view from the roof. 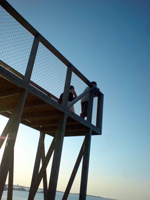 Linnahall was designed by the Estonian architects Raine Karp and Riina Altmäe for the regatta events held in Tallinn on the occasion of the 1980 Moscow Olympics. During the Soviet period all port facilities were treated as military secrets, and the seaside was off limits in most towns. The erection of Linnahall by the sea enabled the residents of Tallinn freely to visit the seashore for the first time since Estonia’s annexation into the Soviet Union 40 years earlier. One can’t help but think of the urge to freedom that people then must have felt. Now the property of the city of Tallinn, the building was closed up last year while we explore new ways that we might use it. The sacrifice of construction quality due to its demanded speed, the resultant high maintenance costs and its presence as a vivid reminder of the Soviet period are among factors working against the building, and through the installation I wanted to re-experience and re-evaluate its historical significance and the semantic link to freedom that is now departing human memory. 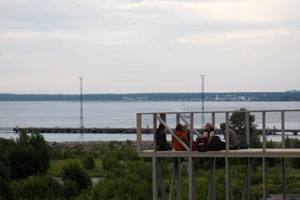 As an urbanist, I take care that my proposals for architecture and cities attain maximum effect with minimum intervention. To gain the most from the characteristics of a location, I consider it important to engage with it where most effective, pinpointing locations like an acupuncturist. 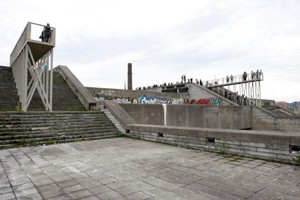 My entry then was to employ construction scaffolding to build a staircase 18 meters in height in the center of the roof of Linnahall (on the level section between the seaside staircase and the town-side staircase) and re-experience the act of the discovery of freedom of 20 years ago. Extending my read of the staircases that are a distinctive feature of Linnahall, I planned an installation proportional to the scale of the structure. But when the structural designer and I crawled into the existing roof framing to survey its condition during the design phase and performed our calculations from the extant working drawings, we found that the most the existing roof could possibly hold would be a four-meter staircase and we would have to assign a 24-hour watch to limit the number of people on it at a given time. And that would run against the underlying concept of engaging with the value of freedom. With about a month to go before the installation was to open to the public, I confronted a choice between compromising with a design change to a smaller staircase and canceling the installation itself. 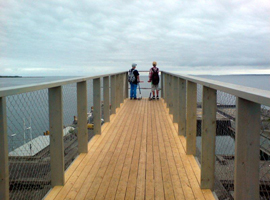 Then one morning I took myself up to the roof of Linnahall, and as I was sunbathing next to the seaside staircase, an American couple came up the town-side staircase. As soon as they reached the seaside staircase, the two backpackers cried out in delight and then climbed down to the ferry dock at the foot of the stairs. What I realized then was that the strongest message this building had to offer was the very approach to the seaside staircase and the moment of arrival there. I knew now that this was the best possible place for an installation making a connection to freedom. The realization impressed on me that I had lost track of the notion, supposedly always foremost in my mind, of gaining maximum effect with minimum intervention. I seemed to have fallen into the trap of reckoning that a submission to a major contest requires major intervention and neglecting to attend to the whispers of the “other party”. 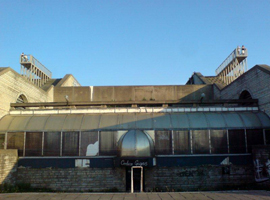 With this new confidence, I made a radical change of plan, hurried to show the festival curator my sketches and won agreement. The installation was now named “To the Sea”, and the plan was to install a wooden platform on the existing staircase as though jutting out to sea. Papers in hand detailing the project that I assembled with the structural designer, every day was a scramble to obtain the building permits that would be needed because in legal terms it was temporary construction rather than an art project. With strong confidence that I could answer with my head high, during the subsequent erection stage I found that the carpenters and tradesmen were quick to share my vision. 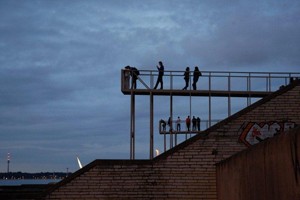 Looking back, although the finished installation was on a considerably smaller scale than my original contest project, I think I succeeded in maximizing its potential. I’ve realized anew that an urbanist takes pride in the need, like a good doctor, to consult the patient before prescribing a solution.