HOME > Column > Memories of the Land / The Power of Photography

[Vol.42] Memories of the Land / The Power of Photography

“Cary, your photographic motifs in Memory Traces provoke a negative image, but is it ultimately a positive message that you’re trying to send out from all this?” After our display work in Nagasaki, having a late dinner at a restaurant near the venue, I gathered my courage and asked this question to Cary. What I mean by plucking up my courage is that I wasn’t sure whether this was a question worth answering for Cary, only that I felt the need to ask him this at least once. He on the other hand replied, “Yes, it is,” with a smile. 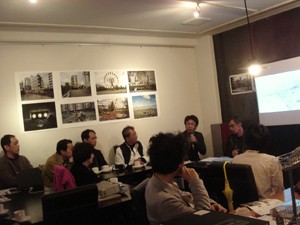 Hiroshima, Nagasaki, Chernobyl, Kosovo, Sarajevo, Bikini Atoll – the photographs compiled in Cary Markerink’s photography collection Memory Traces are landscapes of sites where mankind have caused terrible tragedies, seen from a thoroughly objective standpoint. Included in these sceneries was the familiar city of Nagasaki, which made me feel something close to a kind of dizziness. It was as though this photograph of the current city of Nagasaki in all its peacefulness conversely brought back into question, the fact that I was born in a city where a tragedy of considerable prominence in human history took place, and that I have already lived here for more than half a century. Ground zero Nagasaki; of course, there was no trace of the atomic bomb explosion in the landscapes near the hypocentre that Cary had printed onto the large-sized film. However, beyond the filter that is the present, you realise that even though you don’t see it, there certainly exists a memory of the land. If I may take the liberty of suggesting, I personally think that the title Memory Traces refers to this. Looking at Cary’s photographs, I rethought the possibilities held by photography itself. Or in other words, I could say that I reacknowledged the importance of the photographic medium in the present age.

Talking of photography in general, there are many cases where the functional recording side stands out too much, or the colour tone and balance of the picture is expressed too closely to paintings of the past. What I’m referring to is a documentary photograph capturing a decisive moment, or a photograph that looks so beautiful that it almost resembles a painting. These kinds of examples have been taken to measure the existential value of photographs, and is also the way in which common photographs still exist today. However, Cary’s work in Memory Traces at least stands differently to past photographs. If you were to see ordinary photographs as “records”, Cary’s works are “memories”. He turns the finder to the memory itself and releases the shutter; he turns it towards the memory implied by the land itself. The people of the land each fold in a memory of their own life to add to the pile, as though overpainting the memories where the human race had obviously treaded wrongly. However I think Cary focuses on a layer of memory at the very bottom that can never be erased.

So what is the photographer Cary Markerink trying to tell us by exposing the memories of the land? For example, is it to point people’s actions to a positive direction by presenting an image of negative traces? It’s easy to interpret his works simply as a warning towards humanity. Even before this though, isn’t he trying to silently offer us a sharp insight into something like a kind of karma that pushes mankind towards destruction without complaint? When he answered “positive” to my question, I was happy, but felt moreover, an admiration towards him as someone who continuously challenges that big, deeply rooted problem that human beings have been burdened with. Invisible memories are woven and piled up into the ordinary landscapes of everyday life. Through a device called photography that was initially used to record a momentary landscape of a certain place, he spreads out in front of our eyes, a long accumulation of human memories, forcing a reality onto viewers as though to blow away shallow senses of humanity. Cary’s works seem to indicate that the photographic medium will surpass journalistic records of social problems and artistic expressions of the individual to possess the power to further reach the fundamental questions of human existence. 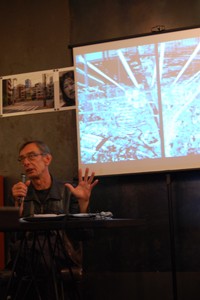 The event in Nagasaki was realised thanks to an offer from Ms. Mikiko Kikuta, the artistic director of the photography project “European Eyes on Japan / Japan Today” in which Cary also participated. It was early February when we first met that I received an offer from her about doing a talk event in Nagasaki with Dutch photographer Cary Markerink. Now that I think about it, that was a month before the earthquake and tsunami hit the T?hoku region. It was the first time that I was shown the large-sized book of photographs, Memory Traces, and I thought that these were very important works that should definitely be introduced to the land of Nagasaki. It was during the preparation of the event that the accident occurred at the Fukuchima Daiichi nuclear power plant and mankind was burdened with yet another negative memory beyond recall. In the end, Cary’s talk event and photograph exhibition at Nagasaki, a site of the second atomic bombing, ironically took place whilst confusion spread across Japan due to the Fukushima nuclear power plant accident.

I also thought that we could dig down further into discussion and gain better comprehension if the event took form of a talk session with an artist from Nagasaki who would understand Cary’s works. The one who gave ready consent to participating in this talk session was Mr. Masaoki Yamamoto. He is a documentary auteur representing Japan, being awarded numerous prizes such as the Hoso Bunka Foundation Award, a Grand Prix at the Age of Regionalism Video Festival, a Child Welfare Culture Award from the Foundation for Promoting Sound Growth of Children, the World Film Festival Asia Future Prize and the FNS Documentary Grand Prize. The talk session was well developed as speculated and was substantial, the venue full of people from various parts of Kyushu.

I would like to use this opportunity to say thank you to those of the EU-Japan Fest Japan Committee for supporting such distinguished artists, to the designer Ms. Kayoko Yamazaki, and for all the support that we received, without which all this would’ve been impossible to realise.