“Inner Landscapes” got going in 2008, when the call went out for projects to feature at European Capital of Culture Turku 2011 in Turku, Finland.

Our project collaborator Marja Pirilä is a Finnish photographer known for her series of camera obscura portraits in which she photographs her subjects in their homes, a pinhole camera constructed of the room itself into which outside scenery is projected as a background for the portrait. Meanwhile, with an interest in work that combines visual art with the applied art of ceramics, Tomoko Kurahara and I have together shown work in Japan and Finland featuring pottery as a medium depicting landscapes, urban scenery or memory, as in our series of ceramics fired with landscape photographs transferred to them. 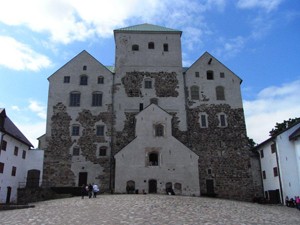 Our starting point for the Inner Landscapes project was the notion of using the common properties of our work to render visible the past and present of the town of Turku by interviewing Turku residents about their personal histories and working from their own photo albums and other memorabilia to produce Pirilä photographs and S+T ceramics depicting these personalities and showing our work in the symbolic venue of Turku Castle.

After showing at Turku Castle from June 17 to September 25, 2011, the Inner Landscapes exhibit moved to the Portsakoti community center in Turku from September 29 to October 30. We are also looking into the exhibit appearing in the Finnish cities of Tampere and Helsinki into 2012. 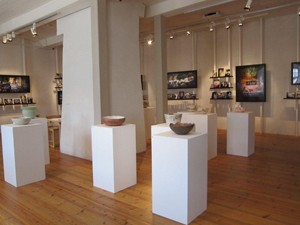 In April 2010 the three of us stayed three weeks in Turku to conduct interviews with nine elderly people aged from their seventies to their nineties who would serve as our subjects. The nine had been identified in advance with the assistance of the Portsakoti community center in Turku, with which Pirilä had worked previously in the course of her own projects. Some had offered themselves as participants upon hearing of the project.

Though they are regular visitors to care centers such as Portsakoti, all the subjects normally live at home, either alone or as married couples. Map in hand, we bicycled around town to visit them at home. Some said they had never before seen a Japanese person, but welcomed us warmly into their homes though we had only just met and could not communicate directly. We spent just three hours or so with each of them listening to stories of their lives from childhood to present day while looking through their photo albums. 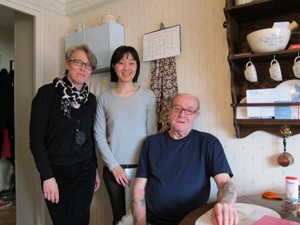 Their carefully crafted albums were packed with images of childhood pleasures and memories of fun family outings during the short Scandinavian summer. Through Portsakoti nurse Ritva Muurinen and Pirilä acting as interpreters, we heard happy romances of how couples came together as well as sad tales of war and partings from parents and spouses. Even taking into account the tendency to highlight the more pleasant pieces of one’s past for new acquaintances, we were left with the strong impression of our subjects, in the bosom of their families, looking back and declaring theirs had been a “good life”.

After our time in Turku we returned to Tokyo and started work on production of the ceramics. Traveling between Tampere and Turku, Pirilä conducted additional interviews with our subjects as she photographed their portraits and gathered the whole into a joint work with video artist Terhi Asumaniemi. 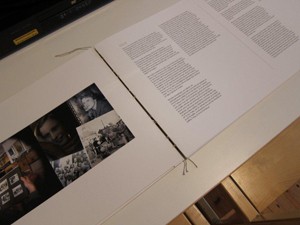 From the stories told us by our nine subjects, duplicates of the photos they showed us, responses to our questionnaires about hobbies and tastes, our impressions of the subjects on the days we met them, the interiors of their homes and the clothes they wore, the neighborhoods of Turku and other particular details, we compiled scrapbooks and plotted out what form of ceramic ware, what coloring and what decoration would best depict each individual. The time we spent with our subjects was but one day out of their long lives, but always on our minds was how well our impressions would serve to depict them. Although our work would take the form of pottery, it seemed to us to be not very unlike transferring photographic images to developing paper or working from retained impressions to draw their portraits. In our previous work we had taken potting to be a medium of expression, and we feel that approach came even more to the fore in this round of work. 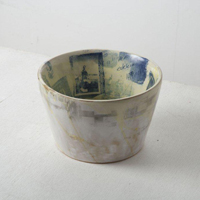 In the course of our interviews we sensed that our subjects’ lives in Turku were interrelated. Though few of them in fact had ever met, it emerged that they had attended the same schools, lived in the same neighborhoods, and had in common other things in the way it is with small cities. During our own time in Turku, we would run into one of the subjects or project helpers here and there in town. It was the assistance of various different residents of Turku that made this project possible, and we felt their presence and their relationships with other people to be important elements in the city’s makeup. 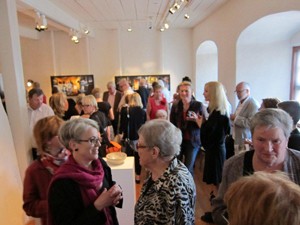 Something on our minds since the very beginning of this project was the notion that our interviews, our time in Turku and the work we created could reveal tales that would draw our sympathy in the lives of nameless individuals who would not be recorded in history. We think that national and linguistic differences will not hinder opportunities for even the most personal particulars or mundane landscape to lodge in the memory or stimulate the emotions, both of ourselves and people viewing our work.

We hope that in future work from this project will have its own showing in Japan, but we also hope sometime to conduct interviews with elderly people in Japan and produce work based on them for show in Japan and overseas. We hope this project will provide opportunities for people to construe their own lives, families and environments as having a single form.