HOME > Column > A Performance without Barriers

[Vol.40] A Performance without Barriers

I knew Romania as a country where a revolution took place on the year of my birth to free itself from a long and haunting dictatorship. As for Sibiu, it was a city within Transylvania that even the bestselling guidebooks in Japan had failed to notice. However, this was where an international theatre festival as large a scale as those in Edinburgh and Avignon took place, its various performances attracting increasing global attention. According to reports from last year’s festival, the volunteer work seemed a worthy challenge; a cultural dialogue between different cultures. Having studied art history with literature and performing arts on the side during university years, my mission was to engage in as many forms of art as possible and to contemplate the relationship between art and life in the community. Driven by curiosity and a desire for challenge, I decided to apply for the volunteering scheme. 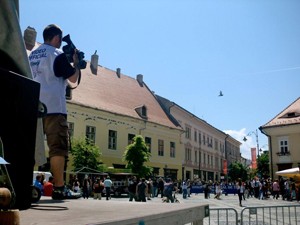 During the ten days of the festival, I worked in the Video Department under a schedule where I would get up at noon and go to bed at dawn. I would accompany a fellow volunteering camera man during the festival hours, assisting the shooting of performances and the public. From midnight onwards, I would help edit the tapes taken during the day to create a video footage of about four minutes, everyday, to show what went on during the day via youtube and through multiple screens in places such as Piata Mare and Radu Stanca Theatre.

This year, the Video Department consisted of 5 volunteers including myself with Costin managing the team. Although this festival celebrated its 18th birthday this year, it was only 3 years ago that its own video department was established; video footage of the festival was only created since last year. Due to this, there were constant technical issues to be resolved making the majority of my tasks involve constant talk to maintain the workflow.

As we stayed over for work in the empty theater, resting in the courtyard now gone quiet, ideas to improve the Video Department would crop up in our conversations. I would suggest that a couple more camera men would let Costin concentrate on editing, to which he would reply that there would be no time to train them. I would then half joke that next year, perhaps he could get a camera man volunteer from Japan, to which he would reply that it is only after working with Mr. Chiriac for a long time that you understand what he wants in the videos.

Although I thought this was rather stubborn at the time, I have to admit that one of the keys to this festival’s success lies in the teamwork and trust shared amongst the organisers. Achieving recognition as the European Capital of Culture in 2007, Sibiu has been fighting the flow of art funds going South since the financial crisis. This posture seems to be taken up by people like Costin and Lavinia and the sacrifices they make for the festival. The reason they work to such an extent seems to be because they share a sense of confidence and passion in what they do. Although I have heard Costin moan more than once that he would quit if he gets any more work, I doubt he would resign anytime soon. Similarly with the volunteers, it seems the case that no matter how much they complain about work at the time, they end up coming back for next year’s festival.

One does not have to look far to see where the attraction lies. My partner with the video camera would show that he is enjoying a performance by recording much more than first planned. My host would retell the brilliance of one of the actors she saw on stage with enthusiasm upon my return. Of course there were criticisms as well, but all the comments, may it be positive or negative, showed no feelings of indifference. The festival organisers too, although very strict, provide good volunteers with chances to travel Europe amongst other opportunities, recognising their importance in the festival. It is probably this drive that has succeeded so much to tie in this festival to the roots of the community.

My tasks allowed me to visit many venues and see various performances. Regarding venues, they used schools, abandoned factory spaces, pubs, streets and squares as well as theatres. (It was the first time I heard someone say be quiet to anyone in a pub with beer and all at hand!) There was an interesting relationship between the performers and the audience in the streets and squares where concerts and large scale spectacles took place. Aktionstheater Pan Optikum’s TRANSITion for example, used a large main theatre and several small stages that were manually maneuvered through the crowd. If this was in Japan, the space for the audience would be marked out somewhere or maintained by someone, but none of this was there; moreover, none of it was necessary. The audience would move out of the way without hesitation whenever the stage approached them, and would follow from behind as though enchanted. This was the same in the streets; even with the performances involving stilts and acrobatics, there was nothing between the performers and audience. The latter would maintain its own distance and move alongside the performance. Radu Stanca National Theatre’s Faust was also a theatre piece that walked the audience despite taking place indoors. During the show, we were directed to walk along the path that ran across the stage to “hell.” This was not only impressive, but showed trust in the audience to participate as part of the performance.

The remarkable thing concerned not only the use of spacial features. Of course, the creative use of previous factory space as seen with Libera Hall and Simerom Hall were impressive. During the evening performances in Piata Mare, the lights, the square filled with people, and the silhouette of performers projected onto the surrounding buildings were all captivating features in the use of the public space. However, this would only be half as dramatic if it weren’t for the actors. The current economical situation resulted in many one-man shows this year. Far from being a mere substitute for something more grand, these performances really showed what one human being was capable of enacting. With Radu Stanca National Theatre’s Felii, the actress Ofelia Popii played seven parts, making us wonder in awe about the drama that could take place between the various dimensions we are each capable of encompassing. It was proof that rich culture does not necessarily develop in economical abundance. It is when there are inconveniences and obstacles to overcome that the best forms of creativity are borne. 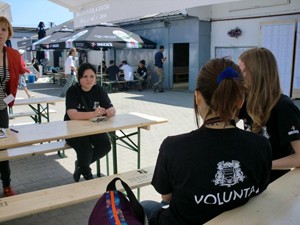 For me, the people of Sibiu whom I have become acquainted with were as interesting as those whom I saw on stage. Their eyes would glow with enthusiasm when they were happy, and they would be the most silent of souls when feeling depressed; and oh the scene they would make when things did not go as planned! This everyday drama was such a contrast to the reserve I have come to accept in Japan. One wonders whether the expressiveness of these Romanian people could have anything to do with the accessibility of theatre there. Before visiting Sibiu, I wrote that the performing arts was a form of art capable of stimulating contemporary society to a great degree. It can move the audience using various means such as words, movement, music, dance and use of space, at the same time establishing immediate experience. It leaves a strong impression on the spectators sharing the same time and space as the performers. With the majority of performances I saw in Sibiu, I could feel no distance between the performers and the audience. Perhaps it is because of this that one could feel an intense relationship between oneself and what one witnesses on stage like drama spilling into life.

This may be a little off topic, but the people of Sibiu seem to be fond of local organic food, and I’ve heard the use of the word “bio” often to explain this. However, with Romania becoming a member of the EU, there has been new regulations made concerning food sanitation, making it difficult for producers to trade goods with the community. As my friend pointed out, “I’ve grown up with cheese from my neighbours without expiry dates and never got ill. There’s no need for these regulations.” This reminded me of one of Dan Perjovschi’s satirical pictures he painted on the wall outside Radu Stanca Theatre, which depicted scattered stars calling to the perfectly alligned stars constituting the EU symbol, “Are you still staying in a circle?”

When it comes to living, the people in Sibiu seem to prefer their old yet charming town to its rapidly changing capital, Bucharest. During my stay, I heard many remarks about maintaining this precious history and to communicate its story to the world. In other words, these people have a strong idea of the community in which they live. This goes for the festival as well. Japan is currently staggering through heavy clouds of fear and uncertainty. However, we should take such turbulent times as an opportunity to stop and rethink our identities and what constitutes our community. Amongst the many things that I have learnt during my time in Sibiu, it’s this sensitivity and strong will that succeeds to establish a milestone in the field of culture. 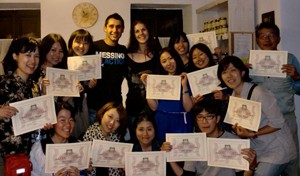 I would like to thank EU Japan Fest, everyone involved in Festivalul International de Teatru de la Sibiu, the Japanese volunteers and my host, the Stoicescu’s for this amazing experience that I have had in Sibiu. Mulţumesc!