[Vol.4] On Japan and Contemporary Photography

A report on the “Positions in Japanese Photography” symposia

This autumn of 2003 the Graz-based photographic art foundation Camera Austria produced the “KEEP IN TOUCH: Positions in Japanese Photography” project. In addition to an exhibition highlighting the mainstreams in contemporary Japanese photography, the project also featured three symposia.

Each of these put the spotlight on young Japanese photographers currently working in that medium, and the panels were made up of curators, critics and other observers specializing in photography and photographers working primarily in Japan. 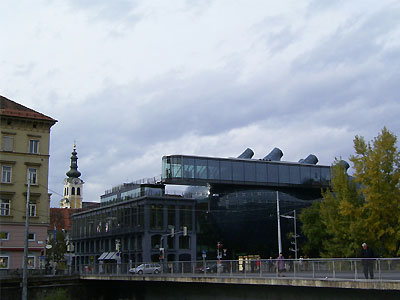 Kunsthaus Graz, which housed the exhibition, is a structure only recently completed and has a conspicuous presence in the center of Graz, lined with traditional stone buildings.

Inside this building with a hyperbaroque exterior, the work of Mao ISHIKAWA depicting American armed forces servicemen in Japan faces onto that of Kisei KOBAYASHI depicting young Japanese traveling around Asia. Next to the tranquil scenery of the work of Risaku SUZUKI, one finds Kyoichi TSUZUKI’s photographs of a girl frolicking naked in her disorderly room. The Graz audience of families and couples, both elderly and young, gaze on these photographs as long as they will be held. There seems to be something interesting happening here. 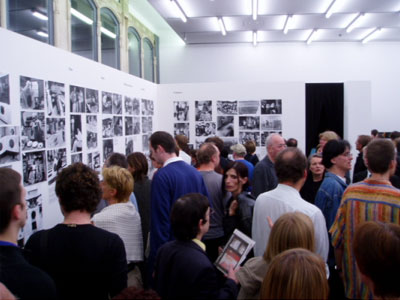 The three symposia naturally converged on what the nine young Japanese photographers whose work was shown here showed in common and their relationship with other regions and generations. The latter half of the closing symposium developed into a debate among those of the nine photographers then visiting Austria and the regular panelists from all of the symposia. In the course of discussion between these on the stage and members of the audience involved in photography locally, the distinctive characteristics of young Japanese photographers that arise in comparison with trends in European and American photography rose gradually in relief and the symposium grew increasingly heated.

Over the course of these three symposia, a number of intriguing keywords emerged around contemporary Japanese photography. Toshiharu ITO’s edges and Toshiya UENO’s phrase contact zone are two that received vigorous attention in the subsequent discussion and comprise the overall view that may be reckoned the key to the three symposia as a whole.ITO pointed out that while the nine young Japanese photographers seem at first to share nothing in common, they have in fact each been influenced in some form by the previous generation of photographers consisting of Teruaki TOUMATSU, Daidou MORIYAMA, Takuma NAKAHIRA and Nobuyoshi ARAKI, and looked in the keyword “edges” for clues to identify what it is they thereby have in common.

The presence of warp and woof in the basic pattern interweaving society, he says, becomes apparent when you look at the edges of that society. The edges here, therefore, are not necessarily those between center and periphery, but potentially exist everywhere. The presence of a photographer is one that creates the world through an embodiment of the awareness of self, and an edge as a potential may be brought into the light in any number of places through the actions of these photographers, according to ITO.

On the other hand, UENO derives a concept he calls the “contact zone” from the context of post-colonialism, remarks on the timely, immediate function and significance these photographs possess as “places” where the images expressed, the people depicted in them and various information come and go, and stresses that by examining the archipelagic characteristics nurtured by Japanese topography, we can explore the possibilities implied in the work of these nine photographers for photographic expression in contemporary Japan.

In response to a question from the floor as to why the exhibition was comprised of the work of these nine photographers who appear to the casual observer to be so disparate, Christine FRISINGHELLI, one of the curators of the exhibition who also steered the way forward throughout the three symposia, deployed the terminology of “contact zone” as place.

By selecting works for the exhibition through the eyes of a foreigner at a remove from the domestic circumstances of photography in Japan, FRISINGHELLI said that she may have cut through cliches that could restrict the photographic expression that arises from different standpoints and that would cling to these individual works in a domestic Japanese context, that this approach to selection then made the project a “place” where clues to new relationships could be discovered and that precisely this is one success that should emerge from this project comprised of an exhibition and symposia. 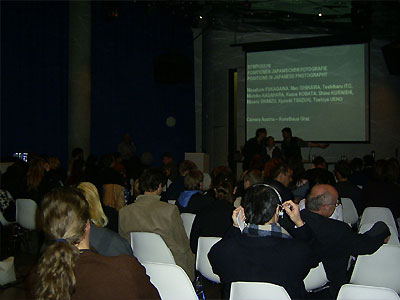 Mao ISHIKAWA and Kyoichi TSUZUKI are photographers whose work was shown in the exhibition who also participated as symposium panelists, and their two-way discussion of the act of expression that photography consists of was of tremendous interest. Taking a question from the floor on the specific differences in their stances towards photographs, TSUZUKI replied that “There is in fact nothing to add to the observation that our positions are so clearly different” and left a colorful impression of the hall wrapped in harmonious laughter. Because it is in fact precisely the difference that is evident between their work that permits no further denial of the swings that the “place” called Japan experiences in its modern acceptance, on the one hand, of distinctively continental centralist norms while retaining a linear, offshore inclination to the physical, that has been continuously unrelated to the exclusiveness grounded in Occidental ideologies.Kazue KOBATA, born in 1946, used the time allotted to her as a panelist to discuss the development of thought and artistic expression in post-war Japan coupled with the story of her own life as it originates in her memory of American Occupation soldiers that she encountered in early childhood. Using this mode of exposition to artfully invert the view of the vicissitudes of thought and expression that have tended to be discussed solely in terms of capitalized abstracts, KOBATA mused that what is actually demanded of the photography audience today is to identify the consistency or the distinctiveness in the conceptual background and internal structure of the work and accept the diversity found there simply as diversity, rather than to take self-satisfaction with its identification, and then to assimilate it from one’s own individual point of view.

As it becomes more ineffective each passing day to engage with photographic expression through one or another ideology or ism since the collapse of the Cold War in the 1990’s, it seems that artistic expression is shifting course towards a conforming physicality and quotidian respective to the particular creator and viewer. From the standpoint of the audience, to accept a work seems to require one to be prepared to swallow its subject matter whole and complete, which is quite more difficult even than it sounds. But this in itself only adds to the pleasure of viewing the work of these photographers that continually fills up with a something that one can never quite scoop out of it.

By supplanting the stereotyped image of Japan of Fujiyama and geisha, manga and anime, with the Japan of today, incapable of neat and ready summation, and showing that elusiveness undiluted, this project of a photography exhibition and symposia seems to have been a more realistic presentation. This would appear to be a most worthy achievement, but surely it is just this that is one of the most important roles that this sort of complex exhibition can play in contemporary society.

This is what I myself take from viewing the exhibition and taking part in the symposia.