Exhibition Curator, Manger of The Group 1965

The catalyst for holding this exhibition was, upon becoming curator of Kunsthalle, Dusseldorf in February of 2010, Gregor Jansen approached Tsuyoshi Osawa with the proclamation, “No Murakami, no Nara. I want to introduce unrefined Japanese modern art.” Osawa responded that if that were true, he’d suggest The Group 1965. 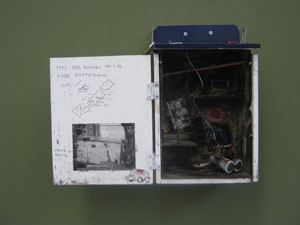 The next month, while visiting Japan for research and fundraising, Jansen met some of the artists and got along well with them. For the exhibition the following year, they discussed a collaboration amongst everybody and having an event every day. In May, I, the manager of The Group 1965, visited Dusseldorf where I saw the venue and spoke with Jansen about planning, funding, and the budget.

Obviously the budget was a concern. Jansen and Osawa and Aida were intent on presenting recent representative works, leading to high costs for shipping. Right before this event, Aida was presenting his large work “Monument for Nothing III” in a one-man show in Vilnuis, and Osawa’s “Sanuki Museum of Soy Sauce Art” was in the Lambert Collection in Avignon, so those two pieces were quickly chosen. Moreover, after negotiating with Kunsthalle, the Japan Foundation agreed to co-host. Since 2011 is the 150th Anniversary of Japan-German relations, funding was quickly agreed upon. Finally, The Group 1965 also searched for funding and, in a bit of good fortune, the Pola Art Foundation agreed to provide the full amount of necessary funds. Our budgets concerns were gone.

Germany, Japan, Oiwa in New York, myself in Hong Kong-right in the middle of finalizing the plan, it happened. 11 March. The earthquake, the tsunami, and finally the explosion at Fukushima.

As you probably already know, since Chernobyl Germany has been especially sensitive to radiation. Just as the schedule for shipping the art pieces was finalized, the German shipping company canceled the order. Perhaps with the situation unclear, they determined that even Tokyo was in danger of radiation, or they were being cautious of the after-shocks. The reasons are unknown. Even worse, the company had planned to provide a special price as a way to help support the event.

Then Jansen, upon hearing that the number of victims had passed 10,000, wondered whether it was right to use the money for the event. He was caught in a dilemma over whether they should shorten or even cancel it. He discussed holding a smaller exhibition so that all the works could be hand carried or sent by express mail, and only using half the event space or even less.

On the Japan side, the night streets still dark right after the disaster, six people including myself (but not Oscar, as he was still in New York) met in a bar in Kagurazaka. We concluded that in a time such as this, we must have the event. We soon told Jansen of our inclination. We reduced the number of items for express shipping and collected quotes from Japanese companies, then submitted our plans and waited for the response from Germany.

I suppose the enthusiasm of the Japan side and the artists translated because we decided to hold the event at the size we originally planned. That was what came out of the many Skype meetings held between Dusseldorf, New York, Tokyo, and Hong Kong. Miyuki Okabe of the Japan Fund took time out of her busy schedule to allow us to consult with her numerous times. She proved indispensable in helping to convince Jansen.

Further good news came in May of this year during the installation. Matsukage went to Germany early to print out the photograph piece. While working on the preparations, Ozawa joined him, as well as members of the EU Japan Fest Committee. When Oscar Oiwa arrived in Dusseldorf from New York, it was the first time in a while everyone had worked together. As for the Kunsthalle installation workers, they were excellent. Even when told by the artists that it didn’t have to be perfect, they continued until it was. By doing so, they showed the seriousness and diligence of Germans.

The installation work was problem free and the pieces arrived on time. Only the catalog hasn’t been completed by today, the last day of the event. There was a typographical error, but it will probably be done in the next few days. 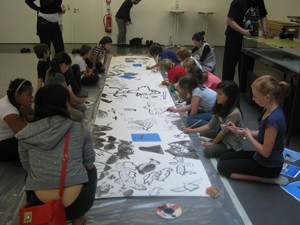 The kids workshop by Parco Kinoshita

Parco Kinoshita’s painting workshop for elementary school children was a tremendous success. Everyone danced to the video he brought of the anime Pretty Cure. Thanks to the Nagareyama City Lifelong Learning Center of Chiba, everyone had a taste of Japanese sweets. And the children, besides covering themselves in ink, painted lovely birds. At the karaoke performance, the microphone may have lost power, but that didn’t stop everyone from enjoying Parco singing anime songs dressed as Zatoichi, the Blind Swordsman.

Sumihisa Arima and Matsukage’s performance of ECHO took place over two days. They spread aluminum sheets on the floor, then broke over a thousand glass bottles over them. At the sound of the glass breaking, a light flashed in response. This was done by a special mechanism created by Arima. Next to the event space was the famous Dusseldorf Art Academy, where Joseph Beuys was a member of the faculty. Their students visited the piece, as well as members of the press and even local Japanese.

Makoto Aida, Oscar Oiwa, and Tsuyoshi Ozawa each held an Artist’s Talk. Of note was Ozawa speaking about his “Vegetable Weapon” photography piece, which he made using inedible vegetables purchased from farmers from Fukushima.
The exhibition generally received high praise, especially the variety of works. It wasn’t recorded by local television programs, but numerous local websites as well as artforum.com published positive reviews. 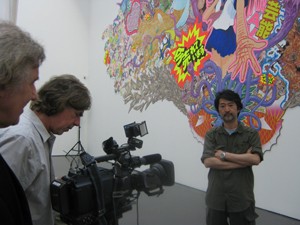 At this time, I’d like to express my condolences to the many victims of the recent disaster. As it happens, none of the those involved in the exhibition were directly impacted, but we did feel it’s effects. However, we should all feel pleased that through our enthusiasm and our effort, we were able to turn this event into a huge success of the highest quality. I’ve felt time and again that it is especially important at times such as this to introduce modern Japanese culture to others, as well as to hear the thoughts of the artists regarding the disaster. Just because a disaster occurred, it doesn’t mean that the only proper responses are to take food and blankets to the evacuation zones or donate money. Isn’t it also important to introduce art and culture to the world? And obviously, putting aside the disaster for a moment, introducing these artists to Europe is a great achievement itself.

Finally, I’d like to express my deepest gratitude to Miyuki Okabe of the Japan Fund and the Curator of Kunsthalle, Gregor Jansen.