Being in the midst of the aftermath of the Great Earthquake of Eastern Japan I went to the lesson without any wish to do any music at all. Nevertheless, after having the chance to meet the Estonian choir conductor Mr. Saluveer there, my ways of thinking about music got totally re-shaped. I have been singing in choirs since I was in junior high-school and I’m still actively participating in a choir’ activities. But in the Yotsukura high-school we have no choir and thus it has been very difficult and time-consuming to plant interest in singing into the students’ hearts. Every year new children come in and so we have to repeat same thing over and over again until at the end they maybe manage to remember at least the school’s song somehow. We definitely don’t have only self-confident students; therefore we are in the situation where there even if we praise their good points many of them don’t believe it easily. My goal is to include singing in our lessons, to get to the point when harmony is echoing throughout the classroom and the children can comfortably let their voices to be heard. I’m trying different things day by day to make them able to let their voices sound without any resistance. 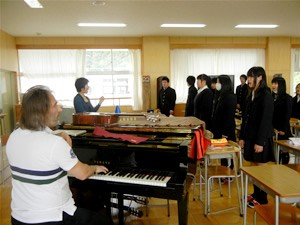 Finally, on May 31st at 6th lesson time Mr. Saluveer came to our school. We had told the sutudents about it and we had all been really waiting for that day. The lesson started and so did Mr. Saluveer’s talk. I was thinking I’ll burst into tears when I saw how eagerly the students were listening to him! The contents were so deep, he talked about how the songs that had brought back peace to Estonia, how they had sang in front of the emperor of Japan, and about the history of Estonia and so many things that we couldn’t possibly digest it all within one hour. When one is singing, the most important thing is how to use ones’ breathing skillfully. Mr. Saluveer explained us he’s paying a lot of attention to use his whole body in order to let out the beautiful voice. First one has correct breathing and the voice rides on it, he said, and that was contrary what I had thought before. Namely, so far I had been thinking only about how to let the voice out firstly and how to use the stomach muscles to deal with it but no matter how much I tried, I never got much better in this. During Mr. Saluveer’s lesson I felt he was able to use solely the power of music to lead the children’s interest to it. He created an atmosphere where everyone couldn’t help feeling like wanting to do sing even if it was actually without raising their voices there. In my own lessons I have made warnings to the students who haven’t let their voices to be heard or who haven’t participated actively and thus I have created a kind of a bad feeling in the air for the following lessons. But Mr. Saluveer restlessly kept telling the students “You can do it, I know, you can do it much better.” and praise them. Within this lesson there were many things I learnt and many things that I am now reflecting back and regretting about my own lessons but I also felt there a lot of hope as well. So my new goal is now “do not give up”. I swore to myself in my heart to earnestly face the students as they are and keep enhancing enjoying making music together with them even further. 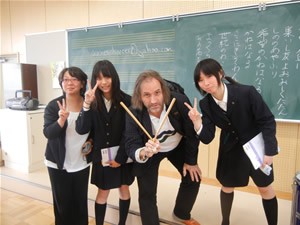 After the lesson, some of the students went up to Mr. Saluveer’s as if they were feeling very sorry to say goodbye. They tried to do their best to talk to him using the scarce English ability they had gained in the language lessons. I think the students thought they’d like the lesson to continue or at least take a photo together. Also a number of teachers had come to listen to the lesson and as the rumour from the students about it was spread out in the school, those who had attended came to me one by one to say: “The students were very glad about the recent lesson, weren’t they? I too, I found myself singing along with them!” and those who couldn’t make it said: “If I only had had time, I wanted to go there so much!”

Even though we speak different languages I felt that through the music all the place got filled with very peaceful atmosphere. From the very start to end of this attempt to create an opportunity to get in touch with music I truly felt Mr. Saluveer’s great power to create the atmosphere and lead people.

After the event, we tried out Mr. Saluveer’s teachings in our lessons as well. We tried out how to use the breathing, how to let the voice out starting from humming and so forth. We were not able to do it exactly the same way as taught that day but day by day we’re trying to do our lessons without forgetting the day’s emotions.

In the very next music class the students from second grade classes 3 and 4 who had actually been present to Mr. Saluveer’s lesson asked me, one by one, questions like: “Today Mr. Saluveer is not coming??” “I wanted to hear more about Estonia…” But the student’s facial expressions were all smiling and merry. Step by step the class became together and we managed to create a good atmosphere there while accepting each other differences.

When I was thinking that without the Great Earthquake this meeting with Mr. Saluveer maybe wouldn’t have become a reality then in some moments I even felt some weird gratitude towards the nature’s calamities. I had already known Ms. Endo from Oku-Aizu Shobo (Publishing) who first called us about this possibility because the high-school I used to work before was in Oku-Aizu. I was impressed by the fact how he supported and encouraged children in many different ways, regardless whether there was a calamity or not. I would like to use this letter as a chance to thank everybody – all the staff members who were related to organizing all this, Mr. Kogi, and of course first and foremost Mr. Saluveer himself.

It has been more than 3 months since the Earthquake. Many things have started to become normal again. We here are doing our best to continue our musical education normally too. Our lives were saved this time, therefore we will try to take care of our health and live fully the life given to us. I hope the world could become all peaceful throughout the power of music.