Our school’s goal for this year is “To raise children’s ability to convey their thoughts and feelings to other people”
Ena vas very prosperous in 1970ies and 80ies due to the vigorous North Sea fishery here but it degenerated as the problems with 200 kai-ri (approximately 370 kilometers) limited fishing area aroused and by now there are only a few ship owners and processing companies left. Regardless of that, the children here still carry the fame of the past ages and have great ability to concentrate on doing things they love and once they come together they bring out smashing energy. Of course there are many very gentle and benevolent children but many of them often don’t know how to handle this concentration and be understood by the others so we decided to set on the goal above. 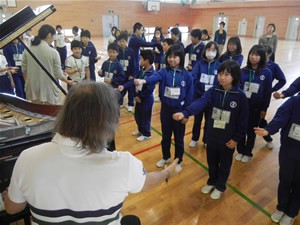 Just at that time we heard from Ms. Endo from Oku-Aizu Shobo (Publishing) about Mr. Saluveer and thought: “How about giving the children chance to learn about how enjoyable “expressing oneself” can be? We would really love to have an opportunity to let this great persona who has numerous actual achievements and who comes from a country known for its music to meet our children.” And after some preliminary discussions with Mr. Kogi, were finally able to meet this day. (Although we were worried if it wasn’t impolite to invite such a persona when our choir doesn’t even have an experience of singing all together in front of people and when especially some boys were even still afraid to open their mouths and let their voices to come out.) 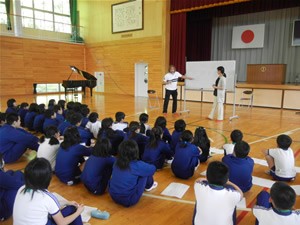 The two hours passed in a flash. When he told out of blue “I brought a computer with me and would like to show you some videos” we weren’t even able to find the screen to project the video onto but then he just solved it by taking the computer and walking between the rows of the children showing them the video; this kind of personality that doesn’t let the audience to feel the distance between them and him caught the kids hearts immediately and we teachers and organizers too were moved by facts like that he showed the videos without telling the children he’s there himself – to put it all together, even though the meeting was held through a interpreter we felt he’s the kind of a marvelous personality who makes everything work without anyone being bothered by a feeling of strangeness.
The children wrote their impressions and words of gratitude for this 2 hours down to mini-essays and so, as an expression of our gratitude, I would like to add a few of them below.

It was great meeting you at the end of May.
Before you came we were excited about what is going to happen. Then when we heard it’s going to be about music I though “Oh, really” and felt only somewhat interested but after the meeting where Mr. Saluveer taught us so many things about music I started to feel that’s something I’d like to do too! Thank you very much.
Before I thought that although I want to become an illustrator in future my parents are against it so I maybe can’t and I felt pity for that. But now I think I’d like to become recognized like Mr. Saluveer is recognized as a conductor by everybody. I decided that from now on I’ll work harder on drawing human shape and faces as well as using colours so that my parents would accept my wish and allow me to become an illustrator.（From a girl, 6th grade）

Mr. Saluveer thank you for coming to visit us from so far place as Estonia. It was very interesting to learn about Estonian music.
I think I was able to try it well enough though afterwards I felt a bit tired of singing so loudly. I’m not really good at music but in that class I understood in what ways it can be exiting. I was even able to mimic the choreographic part at the end of the song in Estonian. Really, thank you very much.
And also thank you for teaching many other things about music. And lastly thanks for the person who translated it all too.（From a boy, 6th grade）

Thank you very much for the previous day. I was very surprised to see from the computer that in Estonia a great number of people come together to one huge place just to sing and I was even more surprised to hear that Mr. Saluveer had conducted in the middle of that big place. What’s more, he’s been on the same stage with the Michael Jackson, I can’t believe it.
Even my mother and dad said when they heard about it: “Really?! That’s something indeed!”
When we sang the song ”Üles, üles unimütsid” I did think at first: ”What?? Is this a song too?”. But while singing it, the song became fun at the end. Thank you for teaching us the summer song and all the others. We are singing them in our music class too.
Really thank you so much. Please do take care! (From a girl, 6th grade）

Thank you for the May 31st.
I was happy to have a chance to get to know you and enjoy the piano performance of the songs that Estonians like with all the other kids.
I had no idea what kind of a country Estonia is but Mr. Saluveer taught us that Estonia is a country where people like to sing songs. What’s more, when Mr. Saluveer showed us the video on his computer I was thinking that there is a person so similar to him but when I got to know that it really was himself I was very surprised. It’s an awesome thing to conduct 10000 people at once so I was very glad to meet him in person. It was only one short day but I was really, really very happy.
When looking at Mr. Saluveer’s DVD I thought Estonia is a truly nice country and that I’d certainly love to visit it one day.(From a girl, 6th grade）

Thank you for teaching us great music. It was the first time I ever felt music can be so enjoyable. Please, when you have a chance, come to Ena Primary School again and teach us more songs. Also, thank you for the souvenirs as well.（From a boy, 5th grade）

Thank you for coming although you must be so busy. Mr. Saluveer, how are you doing now? We all in the Ena Primary school are fine.
The music you taught us was great. I enjoyed most the time when we all sang together. It was difficult to remember the song where girls and boys sing repetitively but the last swiveling around part was exiting. I want to have a lesson with Mr. Saluveer again.（From a girl, 5th grade） 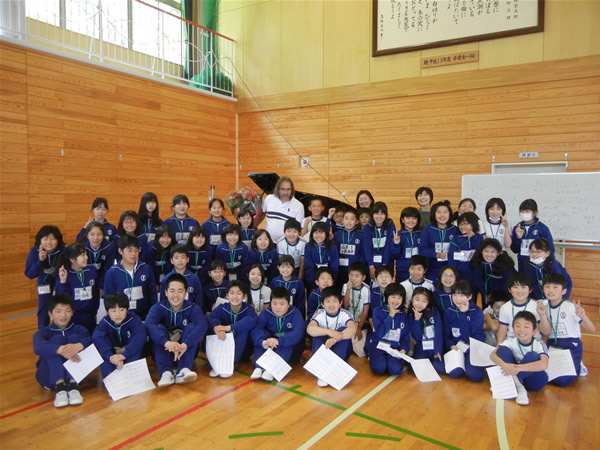