Aarne Saluveer’s lesson was held on Monday, the 30th of May. The participants were 18 members from our school’s choir (eight of them being the first year students) and 13 more boys who were going to join the choir from now on, all together 31 students. As most of them had just begun to sing in a choir we asked Mr. Saluveer to keep the lecture concentrated on vocalization. 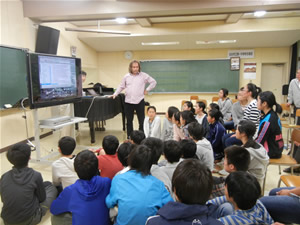 For the start, Mr. Saluveer told us about the “Song Festival” in Estonia and showed us the DVD where he was conducting. When the students got to see the huge scale of the event and the fact that the Emperor and Empress of Japan have visited it they were all truly surprised. It seemed as the energy of the Estonian people was coming out of the screen. I felt it must have been this energy that made it possible for them to make a bloodless revolution and win the freedom to their hands.（Many students told me afterwards they had taken interest in Estonia and would definitely like to visit the country one day.）

After that, the long-awaited lesson finally started. Our school’s choir’s main task at hand is to learn how to release the tension and relax. We’d been practicing every day paying attention to how to let out a rich sounding voice without overstraining oneself but still the voices had been sounding stiff and not reaching very far. 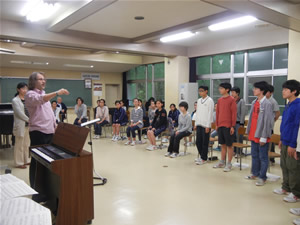 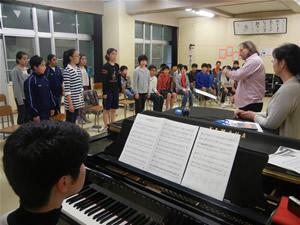 Mr. Saluveer repeatedly told the children that to “relax” is the first and foremost thing to do. In the lesson they tried to let the voices out using many different methods – they tried to sing while opening their hands with the image of a flower opening up, and they tried to sing while moving their legs and while moving their bodies. Through this they became able to let the voices out without making their bodies too strained and at the same constantly not letting the stomach muscles too loose either; and along this the stiffness from the students voices gradually disappeared. The voices started to become softer and softer little by little and I felt that children had learned how to sing more freely and in a relaxed way.

When I asked the students about this after the lesson they told me they had felt they’re singing “A little bit differently than usually” and I think each of them could experience a change in themselves.

After the vocalization lesson we asked Mr. Saluveer to teach one song from our textbook. (As we are going to prepare for a concourse now it was the only song that matched to all and every members so we had not much choice.) Although we knew Mr. Saluveer wouldn’t be familiar with a Japanese song’s meaning, he taught how to handle the phrases and how to swing the song accurately as if he’d knew the words.

After that the students sang all together in one circle. They were told to stand so that the parts were wherever they happened to be, close their eyes or even switch off the lights and try to sing while listening to each other with their hearts. As one could expect already, here as well, while repeating the singing practice everybody could feel the change taking place. The voices got harmonized naturally and we felt a feeling of being in unison. The students said later they’d concentrated on “listening to each other with hearts” feeling it’s enjoyable.

Mr. Saluveer told us afterwards he had held the lesson just changing the approach he usually takes a little. Nevertheless, this was a lesson so inundant of passion for music and energy that it become a great time not only for the students but also for me to reconsider my own attitude towards my daily lessons and my work on the choir’s activities.

After the Great Earthquake of Friday, the 11th of March, the study environment in junior high-schools in Sendai has been in a difficult situation. It’s true not only for the schools that were directly affected by the tsunami but also there are many schools that can’t use their own buildings and have to hold their lessons in gymnasiums or rent rooms from other schools and institutions. In this environment the children can’t sing letting their voices sound freely and without restraint, they can’t really enjoy their music lessons and the worries of the music teachers at schools are piling up with each coming day. In the midst of all this our school has been truly blessed to be lucky not to have had any big damage, being able to continue our music lessons and activities almost the same way as they were before the earthquake, and now, on the top of it all, having had a chance to have Mr. Saluveer’s great lesson. I wish we could to continue our future activities without forgetting how grateful we are for all that blessings and also do whatever we can in co-operation with the students to bring back the musical activities in Sendai city as they were before the earthquake even just a day faster.

I’d also like to thank from the bottom of my heart everyone from EU-Japan Fest to have given us this great opportunity.