Japanese dance company DAZZLE was heartily cheered when they performed in Sibiu International Theatre Festival 2011. This is an essay written by Mr. Tatsuya Hasegawa, stage producer and director of DAZZLE.

Before going to the Sibiu International Theater Festival, we had been wishing to perform in European countries.
Because while performing in Japan many people used to came to us and say: “Dazzle would be appraised in Europe”.
We were wondering why, maybe those people had had some kind of contacts with different European cultures and the feeling what they’ve got from there was somehow similar to the one when they see our performances. Maybe it was so totally different or maybe they just felt so without any particular reason. We kept wondering what would be the real reason for it. 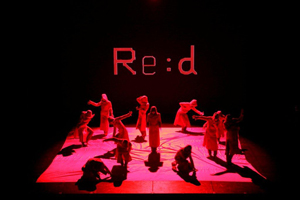 One month before participating in the Sibiu International Theater Festival, we staged our Fifth performance called “Re:d”.
Appraising Dazzle as unique group is not based solely on our dance style. An important role is also played by facts that to our own original story, original musical compositions, have texts matched to scenes, display videos, and use tools to build our stages, design the space and on all the other ways how we create and merge the structural elements of the stage with the dance itself.
Especially in the case of “Re:d” the highlights of the show are minutely calculated stage structures and the dance scenes where tools are used. The fact that dancers move tools around, or dancing with different items exists most likely everywhere in the world; however, we are drawing the line between us and others with our precision and structuring ability. Also in this performance we managed to show some very Dazzle-like developments of the story by creating scenes using huge fabrics, boxes and poles other items which made our work very unique. 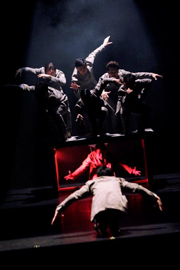 During the performances dancers utter no word. Nevertheless, one more specific feature is that we display texts which tell the story to the audience. This type of story developed in sound novel form brings the performance close to the game-like sensation that is one of the symbols of Japanese culture. We made the choice to use this form in order to make the dance more specific and to prevent the words taking the lead over the dance.

In the story of “Re:d” a man who has lost his memory is gaining it back by searching for “red” messages that tells his past to him. The story itself is rather cruel but expresses a bond that is full of love. The scenario itself is definitely not complicated. However, when expressing it on the stage by using dance, music, acting and different visual elements all combined, it becomes possible to sublimate it into a high level entertainment. The red items that appeared all places during the performance, showing the lead role’s memory as well as reality left a very strong impression to the audience.

We could hear sniffling voices at the last stage of the performance from here and there in the audience. Breaking into tears is something that doesn’t happen often in a dance performance (It doesn’t happen often in a dance performance to make audience shed tears). We think that this is the result of considering different elements that Dazzle has and that we were able to receive very high evaluation from the audience. In addition to this, I also personally feel that this fifth work came out worth to be Dazzle’s new representative masterpiece that has assimilated the new challenges we want to take and experience we have(= our challenges and experience).

By incorporating all kinds of elements into our performance while still keeping it centered exclusively to dance, we tried to make a performance that was comprehensible not only to those who already know about dance, but also to those who don’t. As a happy result of our miscalculation of the balance of the elements it became appraised not only in the dancing world but also in the theatrical world.

For me, who don’t have much knowledge about the theater, Sibiu International Theater Festival was a totally unknown ground. Nevertheless, soon I got to know how great honor it actually was to participate there. This Festival, being counted among one of the three major Theater Festivals in the world, has been evaluated as “the most interesting” among many Theatre Festivals in the world, and there is no end to groups wishing to participate there. I was very glad that the festival found us under such circumstances. Although we had had invitations from contemporary dance (festivals?) before I reckon as a group originally descending from street dance we are the first in Japan to have that honor. (Although it is possible for contemporary dance companies to be invited to the festival, we are the first invited Japanese group which is derived from street dance.) 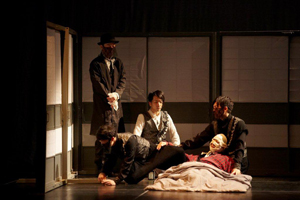 On Sibiu International Theater Festival we decided to perform our third work “Misty Mansion” that has a very complex stage structure.
The composition of this stage evolves on making use of movable paper doors and when they are displaced even as little as 5 centimeters, the tools will crash and along this all the composition would be in danger to collapse. Therefore, to avoid this we created the stage from the floor condition to the placement of the lights very minutely. It was a challenge for us to evaluate the situation, to be flexible, and to react immediately. There were even moments where we could feel that through this work of creating the stage our staff and the local staffs were clashing their cultural and habitual differences against each other.

The tickets were sold out. Even in my dreams I couldn’t imagine that a group from a far-away small island could be welcomed with full hall. Before the start I prayed that if only the performance could make sense (audiences could follow us) … but the result was far above my expectations.
Even before the performance ended the applause and cheers had started. My heart was shaking with the tremble of the atmosphere kind of what I had never felt before. People in the audience started to stand up one my one and finally everyone was standing. I couldn’t believe my eyes. I had to believe this standing ovation was genuine, definitely not to play up to the performers for we were a group that was totally unknown there. 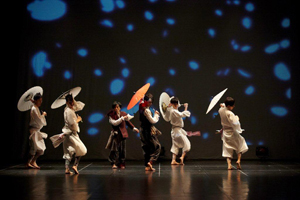 Through the Theater Festival I got a strong impression that the culture is something that connects people (culture and people were about to get together). During the festival period, the town was filled with multiple cultures and senses of values brought by the people and their creations. People were actively exchanging and enjoyed their cultural differences. Though I guess Asian strangers like us hanging around Sibiu is not a common sight there, I was happy that there were people coming up to us saying “I saw your performance yesterday. It was fantastic!” and asking me to take our photos. I remember that the experience opened our hearts which we can never have in Japan.

Unfortunately we could stay in Sibiu for only three days and thus we couldn’t see most of the other performances except “Faust” that was very eye-opening for me. Wow, that kind of expression exists in the world, I thought. I feel that having seen this live my heart has become a little richer. Although this festival is one of the three major ones in the world, I suppose not many Japanese people know about it. I hope more people would have the chance to experience this kind of precious thing that I felt this time in Sibiu, and also feel something they have never seen before in this world.

Dazzle’s Sibiu performance was a great success. It seems that so far what people used to told us – “You’d be appraised in Europe” – hasn’t yet proved to be wrong.
◎ 19th EU-Japan Fest Program: Dance Company DAZZLE