In connection with the photography exhibition "European Eyes on Japan vol. 9" held at the Tanaka Isson Memorial Museum of Art on 7-30 Sep. 2008, Essay Contest. Visitors to the exhibition were to express how the work shown in it affected them, and the contest received a lot of submissions.This essay was awarded the top honor in the contest.

It was as if I was looking at the Ryukyu Asagimadara (Ideopsis similis) I’d seen back then. The memories came to me as if I had somehow fallen back through time.

I think it was the day after a typhoon had passed through. I was in the first grade at the time and a Ryukyu Asagimadara – a beautiful, rare butterfly – fluttered about, dancing right before my eyes. In that moment my heart had been stolen and I came to watch this variety every day. That was the beginning of our acquaintance.

When I became a fourth grader, I joined the group that takes care of all of the animals at the school. In this way I came to look after a large number of these butterflies. To think that it all began three years before, when oneRyukyu Asagimadara flew right before my eyes, and here I was taking care of many of them. I couldn’t help but feel a mysterious connection to them.

But sometimes the natural world is cruel and not all of the butterflies can be raised without a hitch. One from among the many Ryukyu Asagimadara was injured. Its wings were torn to shreds. As one of the students responsible for its care, it was hard to see the butterfly in this condition, and I was filled with a feeling of pity.

“I don’t think it will last long.”

I and most of the rest of us in the group began to think this way. But, as if to erase our feelings of resignation, thisRyukyu Asagimadara, though in an injured state, frantically sucked the nectar from flowers. It drank persistently, as if to tell itself forcefully, “I will live!”

This butterfly taught me what a joyful thing it is to be alive. Surely the butterflies in this photograph are also living each day to the fullest. With fond memories in my heart, I am rooting for them. 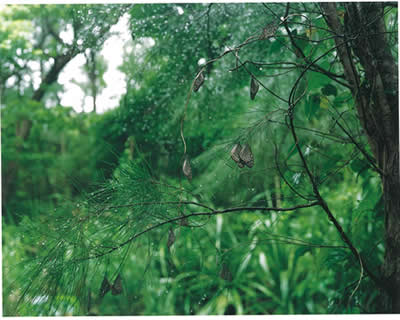