HOME > Column > Reunion with a Radiant Past

[Vol.26] Reunion with a Radiant Past

Office Worker (28 years old) ※The title is at the time

It was as if I was being pulled gently back into the past. Before I knew it I had been enchanted, pulled in by a powerful gravity.

Morning. Afternoon. Evening. One could easily be convinced that it is any of these times of day, and yet it is also distinct from them. It is just the past.

Surely the photographer would seem to be taking a photograph of the present, so what is this feeling of nostalgia?

A moment later, children appear in the schoolyard. They start to play, their cheerful voices rising. Look, there too on the horizontal bar, in the foreground! Looking closely I am able to find my young self there with them.

Having imagined this, I returned to my senses.

What is this photograph? It is remarkable!

Nothing in the frame is active. And yet, mysteriously, it is not lonely. Rather, it immerses me in an all-consuming nostalgia.

I think it might be the color. I like it a lot. It is lighter than sepia, its yellows vivid. It is the color of a ginkgo leaf withering into a gold color, or a treasure box full of ancient treasure. While it makes me feel the end of time, it shines vividly. Because the clouds that hang above the school shed a blurred light, the brightness is increasingly real, and from this, motion is born. The temperature of the air, the smell. If the wind blows, the dirt on the school yard will fly up. The familiar fern palm that, by its mere presence, makes one think, “Yes, Kagoshima.”

Condensed in this space are lovely and precious things that slowly move me. Photographs reflect the photographer’s feelings. A photograph taken with a feeling of affection for a place or an appreciation of its beauty will be wonderful, but a photograph taken in the absence of these feelings will be something different altogether. This is to say that the familiarity and attachment I felt was most likely also experienced by Mr. Nicu Ilfoveanu himself. I am even compelled to ask him if this was truly his first visit to Kagoshima.

This is not a first meeting. It is a reunion. This word is a perfect fit when explaining my encounter with this photograph.

I thank you for a wonderful reunion with a past I had treasured, with a place I had loved, and with feelings I had forgotten for a time. 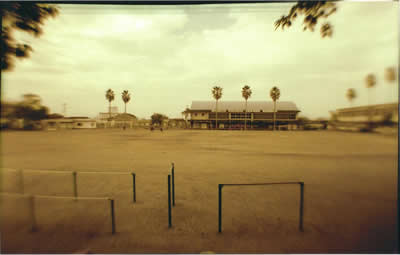