It was of a calm atmosphere, a warm house. I was drawn to a girl in such a photograph. It is not as if she was smiling or angry. She merely looked quietly at the camera. That is the kind of girl she was.

I moved closer to the photograph. Fried noodles, partially eaten. A mandarin orange lying nearby. A single frame of the everyday, of that which can be found anywhere. It was the girl’s imperious eyes that made this simple photograph so remarkable.

What a naked expression! I gasped in surprise. Decency. Civility. Sociability. Here was an unadorned expression from which such useless things had been stripped away. It was if I could hear life’s heartbeat.

That night, together with my mother, I took a look at my own album. “Cute!” my mother said with a feeling of nostalgia, but my own feelings were very complicated. My kindergarten entrance ceremony. A festival for children aged seven, five, and three. My birthday. One page after the next, my innocent self appeared. I appeared so childish I nearly laughed, and so far away that it made me sad. All that remained to me, in the present, were photographs of that same formulaic smile, a smile I had felt compelled to make in response to a shout of “Ready, peace!” I hated my photographs.

This girl whose name I didn’t even known and my childhood self overlapped with one another.

Back then, when I was able to express my thoughts and feelings directly to others, did I have eyes like hers? If so, when was it that I started to hide myself? When was it that I began to deceive myself?

I come face to face with the girl in the photograph. I try looking directly into those eyes which express a firm will. In so doing, I am able to hear my own heartbeat, within me.

Oh that I may be honest with myself, and thereby move forward. 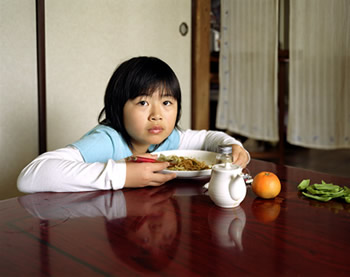