[Vol.20] Scenery I saw with Grandpa

In connection with the photography exhibition "European Eyes on Japan vol. 8" held at the Saga Prefectural Museum of Fine Art on 2-25 February 2007, the EU-Japan Fest Japan Committee co-sponsored an essay contest with the local newspaper Saga Shimbun.Visitors to the exhibition were to express how the work shown in it affected them, and the contest received 191 submissions from people aged 9 to 80 years old. These two essays were awarded the top honor in the contest.

After passing through the photography exhibit, I suddenly began to cry and was unable to stop, for the scenery in the photographs was so similar to the urban landscape my grandfather and I had walked through together when he was still healthy. This scenery was peaceful, dear, beautiful, and so full of memories.

My grandfather loved to look at scenery and he often pulled me along by the hand, taking me here and there. My grandfather smelled of lacquer. He was a sculptor of Buddhist statuary and was forever carving Buddhist statues, memorial tablets and the like. When I was little, I recall being taken to a shrine for my grandfather’s work and playing on the palm of a large statue of the God of Fire.

When we were on a walk together, my grandfather said,

“Keibun, flowers, mountains, and the sea are all beautiful, but scenery like this is truly beautiful.”

Saying this, he took me to places in town where we could feel the presence of people’s lives, and I saw many things there. A cat in a back alley, the back wall of a house, the swings and benches in a park…. They were such ordinary things that I asked,

“Grandpa, why do you say that such things are beautiful?”

To which my Grandfather smiled and responded,

“Which is more impressive, the worn statues of Buddha out in the countryside or the large Buddhas to be found in fine temples?”

Without hesitating, I answered,

“Well, in that case, you are not ready for me to tell you why these things are beautiful.”

Six years passed. I was thirteen. One month before he died from cancer, I asked my grandfather,

“Grandpa, why do you say that ordinary scenery is beautiful?”

At this he made an expression as if it was now about time he could tell me.

“…the back alleys and the back walls of houses – the things we take for granted – they play an important role in the handing down of life. They render a service without trying to stand out, and that makes them ‘beautiful.’”

For some reason, this gave me a warm feeling. And I became able to see, and to feel, the beauty my grandfather spoke of. After seeing me through this time of growth and struggling with his own illness, my grandfather drew his last breath in peace.

I don’t think I fully understand what my grandfather was trying to tell me. Even now I come to the conclusion that the place of the large Buddhas is higher than that of their weathered rural counterparts, and I still prefer the beauty of flowers, mountains and the sea. But, through this exhibit, I did find two things that I can be sure of. First, that I do like that unassuming scenery after all. And second, that I like this prefecture that is home to such scenery.

“Grandpa, I still don’t understand the deeper meanings, but I will take the time and seek them out and show you that I can find them. I will learn to discern true beauty. And I will protect the scenery in this town forever.”

When I say this, I can imagine my grandfather responding,

“Do your best. I will always be watching over you.” 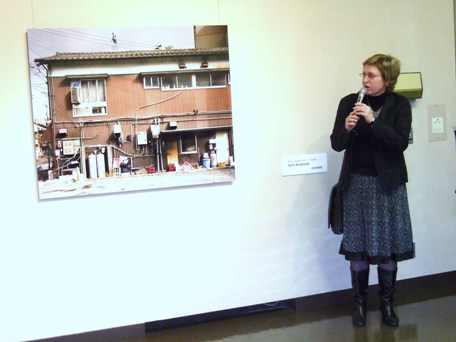 Explanation of the photo works by Karin Borghouts herself at the Saga Prefectural Museum in February 2007.